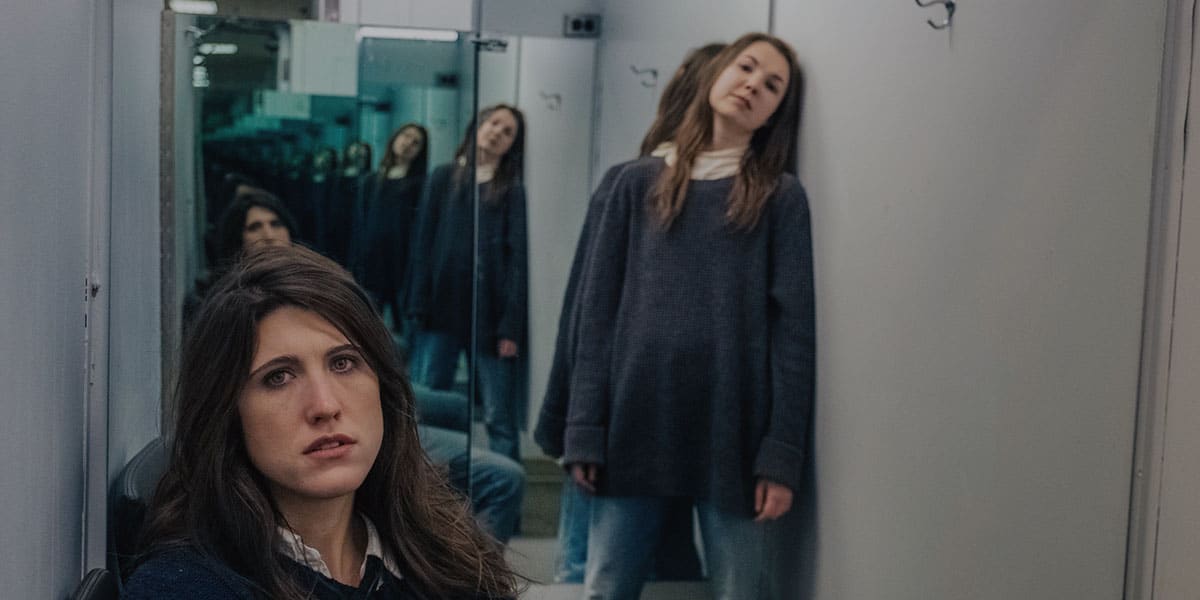 #TIFF18: MOUTHPIECE Is a Compelling Portrait of a Mother/Daughter Relationship

Spearheaded by veteran Canadian director Patricia Rozema, MOUTHPIECE was adapted from a two-woman play written and performed by Amy Nostbakken and Nora Sadava. It tells the story of Cassandra, a thirty-year-old freelance writer from Toronto whose mother unexpectedly dies of a stroke. Happily, the incandescent Nostbakken and Sadava reprise their original roles for the movie.

Tasked with delivery of the eulogy at her mother’s funeral, Cassandra must find a way to memorialize the mother whose life offends her feminist beliefs. Once a writer and editor, her mother Elaine gave up a promising career to raise her two children, as her philandering husband travelled for work. At the time of Elaine’s death, she is long-divorced, yet repressed and stymied. Elaine doesn’t write anymore and she won’t date. She’s a shadow of the woman Cassandra believes her capable mother could have been. The young feminist refers to her mom as “the smartest woman” she’s ever known.

Most of the film is taken up by Cassandra’s ruminations. Thanks to an inventive storytelling device, her internal conflict is brought to life, as she literally debates herself. Should Cassandra eulogize her mother’s life as a feminist cautionary tale to scare her loved ones into action? Should she argue that her mom was a victim of the patriarchal demands placed on women to sacrifice their passions in the name of family? Or should she focus on the happy times, the moments of joy she and her family remember so fondly?

Set in the present, MOUTHPIECE feels like a modern take on a Wendy Wasserstein story. Wasserstein, the famous baby boomer who penned iconic plays like The Heidi Chronicles, depicted the differences between the way middle-class feminist boomers were raised by their mothers, and how they chose to live their second-wave feminist lives. To drive home the theme of creating a feminist legacy, The Heidi Chronicles ends with the titular Heidi adopting a daughter named Judy.

For its part, MOUTHPIECE could practically be a sequel to The Heidi Chronicles, a continuation where Judy has the chance to reflect on her upbringing, deciding it fell short of her own third-wave feminist ideals. With a bold self-awareness, MOUTHPIECE manages to capture our presentist tendency to judge previous generations, viewing them with condescending pity rather than empathy.

I am ashamed to admit, I was initially tempted to anoint MOUTHPIECE as a universal story about mother/daughter relationships. Like Cassandra, I am a millennial woman who was raised by well-off white people in Toronto. Like Cassandra, I had a loving stay-at-home mom who quit a high-powered career. Like Cassandra, I grew up to become a university-educated feminist who writes for Toronto publications. But the strength of MOUTHPIECE is that it would not allow me to see it as universal. The nuanced script forces Cassandra to confront her own privilege as “a thin, educated, middle-class, hetero-Canadian woman.” It owns its social location in a way that made me proud to be a feminist.

MOUTHPIECE is not an easy movie. It inspires more questions than it answers. But it does so with charisma and flair. At least for me, this is an important feminist movie…