How do young people become indoctrinated into a hate movement? Very easily. Directed by Oscar-nominated Selma Vilhunen, Stupid Young Heart is an incredibly moving and convincing film that examines the alt-right movement in Finland through the perspective of teenagers at street level.

Around the same time that fifteen-year-old Lenni (Jere Ristseppä) discovers that his on-again/off-again girlfriend Kiira (Rosa Honkonen) from high school is pregnant, he meets a man who takes on a father-like role and lures him into the epicentre of an extreme fascist uprising. As Lenni gets pulled further into a group of angry violent men determined to spread fear and hate, Kiira is left to navigate her pregnancy, as a young girl, on her own. It’s a bleak scenario that is entirely believable and offers a compelling and unique vantage on a timely issue that is as palpable in Finland as it is right here at home.

As a mother, I found Stupid Young Heart particularly hard to stomach, knowing that the characters’ stress and responsibility was only going to increase tenfold, but I loved how tightly stitched the themes were, how each story beat was handled with care. Stupid Young Heart is a strong film that tackles tough material with absolute tenderness.

I caught up with director Selma Vilhunen to talk about the film.

JM: Why was this film important for you to make?

SV: Kirsikka Saari’s screenplay is very special in how it connects seemingly different themes together and gives a whole new perspective to looking at difficult topics such as racism. Through the eyes of a young boy who feels lost and afraid when facing challenges too big for him, we can have a deeper understanding in the reasons behind people’s behaviour when they project their hopelessness and fears onto those who are in an even weaker position.

Because our main character is young, there is also a lot of hope and beauty and love, which are themes that are always worth studying and exploring, even more so than the themes of hate and prejudice. 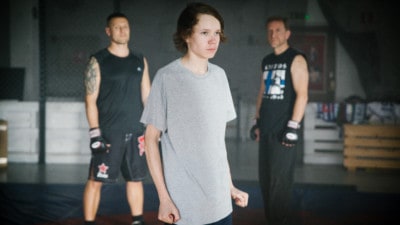 Was there a particular political story or event that prompted you to write a film that addressed alt-right political views?

In 2011, we experienced a turning point in Finland, when a populist party got a lot of votes in the parliament elections. Since then, the normalization of racism has been a growing phenomenon in our society. This, together with the similar kind of movements around Europe and North America, is what made us want to study this phenomenon more closely.

What themes or feelings about youth were you most interested in exploring?

What truly inspires me in teenagers is how they somehow seem to possess the seeds of every feeling and every expression of the self, and how quickly they switch from one mood or one expression to something completely different. They seem to be charged with an energy that helps them explore who they are and grow at a rapid pace, and it is this energy in all its complexity that I find very cinematic.

Connected to this energy is a certain vulnerability that comes with being open to growth and change. I think this vulnerability is something adults need to re-learn over and over again in order to remember what really matters in life. Grown-ups need children as their teachers just as much as children need grown-ups to see them, to validate them and give them guidance by their example.

How did you approach life when you were sixteen, as opposed to now? What do you think is the biggest difference, in terms of a philosophy that steered/steers your life?

Much of the way I looked at life when I was sixteen is how I still look at it. I have more words to describe views that then were more like instincts, and now I have some experience and theories to support them. What has changed most is that now I feel responsible for those who are younger than me, and of course my child. I have also come closer to understanding what love might be and how I can be a part of its miracle. Maybe I was a bit more cynical when I was younger. Learning to know myself better and learning to be more merciful towards myself has made it possible for me to see myself in a more loving place.

What conversations do you hope Stupid Young Hearts will inspire?

I would love if people would discover some prejudices in their own thinking and attitudes towards people who are different from them or in a different situation. I also dream that after seeing the film, people can be a little bit more merciful and nurturing towards what is vulnerable and hopeful inside of them. I hope to be able to bring courage to stand up for love and equality.

What was the biggest discovery—personal or factual—that you made while working on this project?

It was very important for me to begin to understand the richness of cultures that I was surrounded by in the very area where I live in Helsinki. I find it interesting how Finnish Somalis have a Finnish identity while they also identify as Somalis in Finland. In the core of the whole identity theme is the question of what it even means to be a Finnish person, or Somalian, as people are always in a constant process of change and exchange, moving and transforming. An identity is created in interaction, and it is never fixed in one expression.

I struggled with a feeling that I cannot have enough time to truly understand all of the cultures that I’m describing in my film. At some point, I decided to trust the idea of people being more similar to one another than different. In our deepest core, we are very similar, even though on the outside we are labelled different categories by our gender, looks, skin colour or language.

Lastly, when and why were you drawn to film? What films inspired you when you were a child or teen?

I think I have always been drawn to film in one way or another. When I was a teenager, my mom, who studied painting, made me watch Andrei Tarkovsky films, and that expanded my understanding of the medium.

The moving image itself with its vast possibilities began to look like a language of its own. When I was eighteen, I got my hands on a video camera and never let go, as I felt like I had finally come home. I could speak my own language.