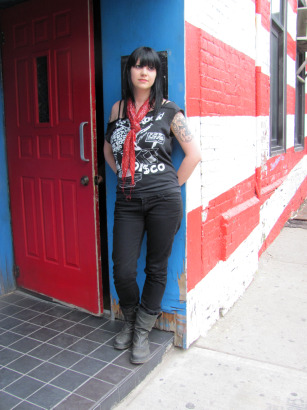 Toranna Punks: Liz Worth Brings the '77 T.O. Punk Scene To Life in her Book, Treat Me Like Dirt

Banks, lawyers offices…piles of rubble. This is the physical legacy of Toronto’s punk rock movement. You wouldn’t know it today, but on the site of these non-descript service buildings once heaved a scene of social unrest, community and creativity. In 1977, Toronto’s punk scene was thriving, with DIY shows, venues, stores and bands like The Viletones, Teenage Head, and The Diodes popping up all over the 416. Kids flooded Bathurst, Yonge St. and both ends of Queen to carve out a place for themselves in the city. With no internet, and no help from record companies, these punks managed to create a cultural niche, consisting of record stores, zines, venues, and a thriving roster of bands. But today, most of this electric legacy is lost. The vagabond nature that made the scene what it is means there are very few physical reminders of one of the coolest parts of our city’s history. That is, until now. Inspired by a few CD re-issues and reading Daniel Jones’ fictional novel about kids on the scene in 1978, Liz Worth started digging. And what she uncovered was a virtual forgotten city.

“When I realized there was a punk movement in Toronto, I thought that was amazing-it’s so easy to read about the scene in New York and London, but not here,” Liz tells me over rainy-day coffee at Wanda’s in Kensington. She interviewed 150 band members, girlfriends, fans, photographers, and promoters to put together Treat Me Like Dirt, an oral history of Toronto punk. “A scene isn’t just about the people making the music.”

“The Toronto scene was very dramatic,” Liz says. “A lot of strange things happened.” Over the short-lived hey day of Toronto punk, bands tended to cycle through venues pretty fast, and with good reason. One spot, The Colonial Underground on Yonge, went out of favour in ’77 when bouncers beat people up with pool cues because the band was playing too loud. Another, a gay club called David’s, burned down on New Years Eve. And there were DIY venues, like the Crash n’ Burn, that existed ‘by the scene, for the scene,’ whenever and wherever they could. The members of the community were creating their own scene from the ground up. “They should be really proud of what they did,” says Liz. “They gave young people a sense of history in their own city. They can redefine their personal geography, and that’s awesome.”

“People are heavily nostalgic for 1977. A lot of people said it was the best time of their lives. A lot of people are still living it.” Liz travelled to Philadelphia to interview Freddy Pompeii and his ex-wife Margarita Passion-two of Toronto Punk’s most legendary characters. Their house on Power St. was a hub, and Margarita opened New Rose in the East End, Toronto’s first punk store, where fans could buy 7 inches, clothes, and sell things on consignment. A TD Bank has eaten up New Rose’s address. Another centre of the scene, Turning Point on Bloor, is now Lobby. Recently, some Toronto punk vets tried to visit the lawyer’s office that replaced the Crash n’ Burn. The lawyers were not impressed.

In the good old days, things got exciting, fast. The Ramones were hanging out at The Crash n’ Burn, and Debbie Harry came to town. Punk fans started to recognize each other at different shows. Fanzines, like Johnny Garbagecan’s Toranna Punks and Gary Gold’s Pig Paper, started bring the community together. These zines were personal and historical, and didn’t always follow the rules. If a band didn’t want to talk to Gary, he’d just make the interview up. Women and men were on equal footing, bands like The Curse were playing as many shows as the boys. Punks were hanging around in the gay district, growing out of a love for glitter rock, finding a language for their social unrest. Liz’s book documents this time in a series of fascinating interviews.

Treat Me Like Dirt opens the city up like an interactive map. Suddenly, pieces start falling into place. Through the voices of the people who saw it happen, a city grows from a sleepy outpost to a thriving, heaving metropolis, almost overnight. Blair Martin, an alum of bands including Android and Teenage Head, talks about looking down Yonge St. on a Sunday afternoon and being the only person there, from Bloor to Wellesley. The Toronto of the punks was a city on the edge of exploding, and they brought not only the music, but a scene and a commitment to a way of life that still influences fans today.

Today, fans like Liz are re-discovering old music, and latching on hard. The incredible power of communication we have has left many fans feeling lost. “Nothing feels like a product of its time or place. We’re craving substance.” Liz says.

There’s a lot we can learn from these renegade punks.

“The scene was influential in ways we take for granted,” Liz says. “Even if they didn’t have the opportunity [to do something], they did it anyway.”

Vanessa Smythe on the Complexity & Contradictions Inside Us