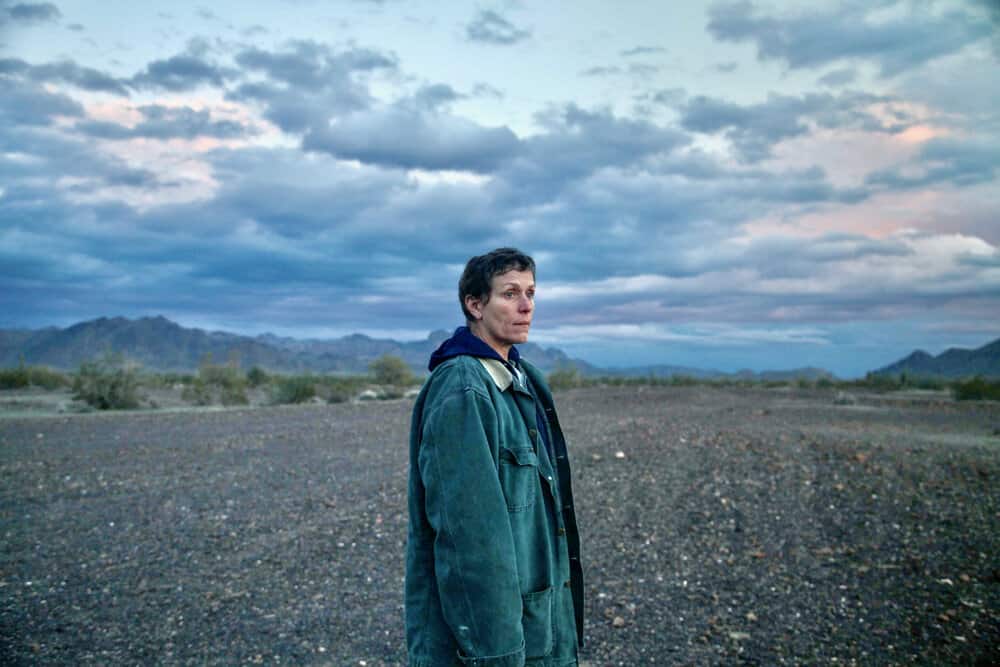 “Chloé Zhao’s sublime road movie, Nomadland, brilliantly speaks to our shared 21st-century examination of our life journeys, which is why we made it our most celebrated film this year with three prizes,” said Peter Howell, TFCA president and gala executive producer. We saw it during TIFF, and wholeheartedly agree that it is deserving of all three wins. See which other films scooped up awards this here.

There is much more to this event, however, than the awards already announced. It is a joyous celebration of the film-loving community in Canada, and there are some seriously hefty and prestigious prizes to be won.

“Our three nominees for the $100,000 Rogers Best Canadian Film Award represent the best in current Canadian cinema: the emotional directness of Anne at 13,000 Ft., the truth-telling of White Lie and the late-life discoveries of And the Birds Rained Down,” Howell said. Runners up will receive $5000.

Also announced Feb. 7 was the 2021 recipient of the Clyde Gilmour Award, Jason Ryle, an Indigenous producer, curator, and story editor who is the outgoing executive director of the imagineNATIVE film festival. The award, named for the legendary Toronto Star film critic, recognizes a Canadian industry figure who has made a substantial and outstanding contribution to the advancement and/or history of Canadian cinema.

Kelly Fyffe-Marshall (who we featured last week) was announced as the winner of the Jay Scott Prize for an emerging artist.Her short film Black Bodies debuted to international acclaim last year and earned her a shot at her first feature. The award is named for the late, prestigious Globe & Mail critic, who famously championed young film talent.

With this year’s gala event moving from The OMNI King Edward Hotel to YouTube, everyone is invited to join! “Change and uncertainty have been anxious realities for the past year, but we are delighted to be able to continue our annual tradition of celebrating the best in film at home and abroad,” Howell said.

Hosted by Elaine “Lainey” Liu, co-host of CTV’s The Social, acting co-anchor of Etalk, and the founder and editor of LaineyGossip.com, and Kathleen Newman-Bremang, writer, producer and senior editor of Refinery29’s Unbothered, this will undoubtedly be an entertaining night full of thought-provoking conversation. We think it’s a very good reason to dress up (for the fun of it!) and celebrate the art of filmmaking.

The Toronto Film Critics Awards virtual gala will take place on March 9, 2021, and air live on YouTube at 8 p.m. Find out more at Torontofilmcritics.com and join the conversation on Feb x with #TFCAawards