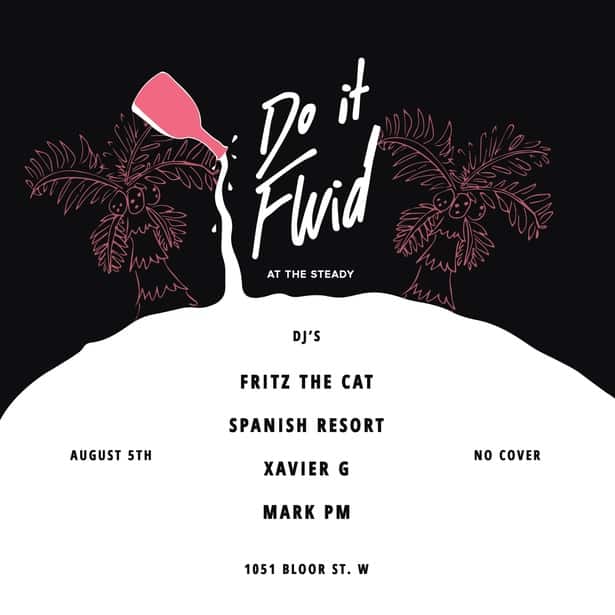 7 pm “Draw Me Like One of Your French Girls” Opening Reception @ Steam Whistle Brewing, 255 Bremner Blvd. A collection of illustrations inspired by the work of actor and pop culture icon Leonardo DiCaprio. This project initially began as an inside joke stemming from artists Sabrina Parolin and Jennifer Ilett’s longstanding mutual love for Leo. However, Leo is so much more than a successful actor (now Oscar-winning), but also an image of romance and a key figure in so many of our coming-of-age fantasies. Live entertainment by Drag Queen Atmos Fierce and the Bedroom DJs. Until 11 pm. Exhibition runs until August 31.

7 pm Open Roof Festival @ 99 Sudbury, 99 Sudbury St. This week kicks off with a performance by Grand Analog, described by creator and lead vocalist Odario Williams as “a beautiful mess of rap ‘n’ roll, dub, and soul.” Following their set is an exclusive Toronto screening of The Fits, which paints a psychological portrait of Toni, an 11-year-old tomboy who tries to become a part of a tight-knit dance team. Music starts around 8, with the film commencing at 9. $15 tickets available online.

8 pm Meow Meow: A Queer Social @ Holy Oak, 1241 Bloor St. W. This isn’t a loud dance party. It’s a change of pace, and a chance to converse. Meant for queers to meet, hang, and conspire with other queers (awesome allies are welcome too)! Cam Lee will be showering down the lovely tunes through the night.

5 pm Perfect Strangers @ Thoroughbred, 304 Richmond St. W. DJ Caff on the 1s and 2s all night long, playing everything from bangers to ballads. Hip-hop, R&B, reggae, new jack swing, and more + $5 food and drink special menu in full effect. Take it all in on the patio or inside, your choice.

7 pm It’s Always Sunny in Philadelphia Trivia @ The Gladstone Hotel, 1214 Queen St. W. Dennis, Dee, Charlie, Mac, and Frank are the Worst People On Earth. Can you remember every time one of them inflicted mental, emotional, and physical pain on each other and well… everyone who crossed their path? Bring your gang (up to four people) to remember the exploits of “The Gang” with hilarious host Kaleb Robertson! $2 suggested donation.

10 pm Do It Fluid @ The Steady, 1051 Bloor St. W. Summer is in full swing and The Steady has just the party to fulfill your sweaty needs. DJs Fritz The Cat, Spanish Resort, Xavier G, and Mark PM will be slip slidin’ to the sounds of disco and deep, funky house, making sure there’s not a dry brow in the room.

10 pm Bubblegoose @ Studio Bar, 824 Dundas St. W. Studio Bar’s very own classic hip-hop and RnB dance party, with a sprinkle of other goodness! Each month, one of Toronto’s top tier DJs will be holding down this jam from beginning ’til end. This month, DJ Mensa selects the tunes. $10.

11 pm Y2K: A Millennium Dance Party @ The Drake Underground, 1150 Queen St. W. A party devoted to the best jams of the early-to-mid 2000s, brought to you by Good Kids. Guilty pleasures, one hit wonders, chart toppers, and everything in between with DJs Fawn Big Canoe and Abel! $10.

9 pm After Dark @ The One Eighty, 55 Bloor St. W., 51st floor. DJ Caff offers the soundtrack for the evening, with a mix of house, R&B, hip-hop, pop, and reggae + food and drinks available to compliment. Enjoy the half price bar cart specials from 10 pm onwards.

10 pm A Night of Lab.our @ Bambi’s, 1265 Dundas St. W. The Lab.our label heads take you on a journey all night long through a spectrum of music for your body and your mind. With Basic Soul Unit and J-UL. $5.

10 am Yoga in High Park @ 1873 Bloor St. W. (just to the right of the front gates on Bloor near the Chess House). Flow-active is running a FREE summer-long yoga series! The styles will vary week-to-week, but will always accommodate beginners and welcomes people of all ages. This week’s session will be led by Retrofit Pilates. BYO: yoga mat, sunscreen, and friends.

Second City welcomes back audiences for ‘Safer, Shorter, & Still So Funny’ (And we want to send you!)