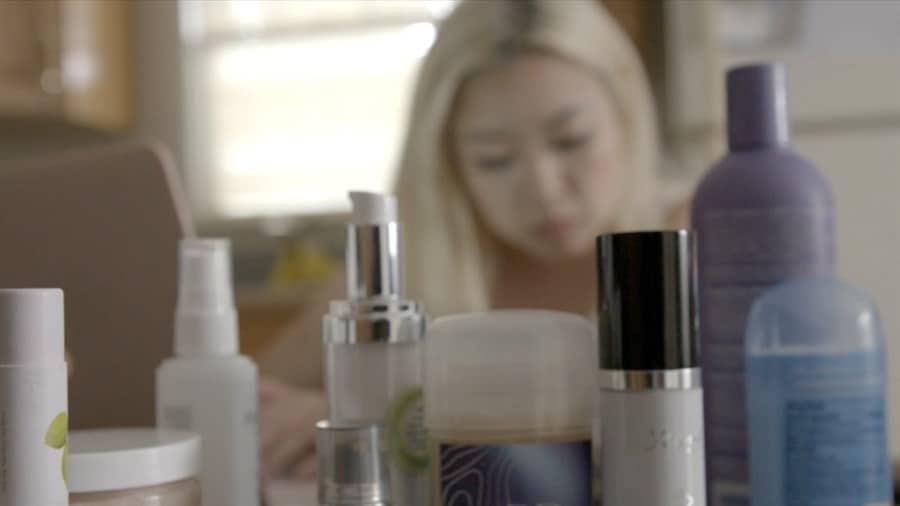 This post was originally published in April 2019. Toxic Beauty is screening this week at Hot Docs Ted Rogers Cinema.

For many women, the idea of ‘self-care’ is enmeshed within our cosmetic routines; nails, hair, skin, makeup. We like to think that the stuff we slather on our bodies every day is good for us or, at the very least, isn’t harming us. A new documentary, Toxic Beauty, demonstrates that nothing could be farther from the truth.

In combing through a substantial body of evidence, highlighted by interviews with researchers, doctors and patients, Toxic Beauty paints a grim picture where unscrupulous cosmetic companies hawk products that are causing everything from endocrine disruption to ovarian cancer. In the film, we see young women going to any length to maintain the de facto western beauty standard, and using harmful cosmetic products to achieve that end. We also meet women who are dying due to their (inadvertent) use of these toxic chemicals.

Toxic Beauty is a wake-up call that will make you shake out your makeup bag and do some serious purging. It may also leave you with more questions than answers—about how this extremely profitable industry has been able to go unchecked for so long, and where we go from here.

We spoke with Toxic Beauty’s director Phyllis Ellis this week.

SDTC: When did it become clear that this issue was something to investigate?

PE: White Pine had been developing a TV series and asked me if I’d take a look at the material to see if there was anything interesting. I landed on the talc issue. I was an Olympian. I used baby powder—like so many athletes do—many times a day. In a deodorant way, in shoes, in underwear, after showers. It was just a staple for me and so many athletes. I had come across women who had passed away with ovarian cancer, and I got scared. If the most trusted brand at that point was causally linked to ovarian cancer, what else am I using that could potentially cause harm?

I had the great fortune of connecting with Dr. Dan Cramer out of Boston; they call him the grandfather of epidemiology. He found a fairly strong causal link between ovarian cancer and talc. The company got in touch with him in 1982. He basically said, “You might want to put a warning label on this.” And it didn’t happen. So you think of how many years ago that was.  After talking to him, he turned me on to some other amazing people. As you go, one thing leads to another.

Whose stories in particular moved you?

I wanted to connect directly with human beings. One is whistleblower Deane Berg, a woman with ovarian cancer that took on—with the support of this extraordinary lawyer out of Mississippi—the biggest pharmaceutical company and won (a bit like an Erin Brockovich story). She took a stand.

I also spent time with some extraordinary women at the end of their lives. They had big lives; now they’re dying because of a personal care product. I always find it such a privilege to be with someone towards the end of their life. There is a different way that they express themselves. Looking at one’s own mortality through someone else’s gaze; it’s quite profound. And they were willing to be part of a narrative that could help other women.

It was an amazing opportunity to talk to the victims and survivors, those that are leading the  science in this area, and the organizations who have been championing this research for years. This isn’t new information, but it is now hitting a chord. Even journalists—the first thing they do is open up their makeup bag and ask, “Is this toxic?”

Was there anything you came across in your research that surprised you?

I became very aware of products I put on my children, and products my mother put on me. I was really jarred by the endocrine disruptors and the long-term impact on children. If you look at the body of the first line of defence, there’s exterior pollution and then there’s interior pollution. That’s one thing we can control: what we put on our body, what we put on our children’s bodies.

Meanwhile, the industry would have us believe that there are no significant harms from using this stuff.

It’s really easy for a naysayer to say, “Oh, it’s just trace amounts of lead. You’d have to eat 700 tubes of lipstick in order for lead to be an impact.” Well, no amount of lead is safe, period. Over a lifetime, with the number of times you apply and reapply lipstick, we are eating it over a period of time.

We tend to view cosmetics flippantly, and they’re not regulated in the same way food and drugs are. If these products were geared towards men, do you think there would be more regulation?

Yes, for sure. Dr. Philippa Darbre said, “Make no mistake, this is an assault on women.” If there were a bunch of men dying from some product they were using, I can assure you, there would probably be something done about it a lot sooner.

Do you expect a lot of pushback from the cosmetic industry with releasing this film?

Potentially, yes. But I think there’s enough support and strong science to support this narrative. Harvard wouldn’t be putting big dollars into researching it. You have to ask yourself, when a big company says this isn’t true, who is paying for that opinion? It doesn’t negate thirty studies that say it is true.

When Canada announced in December that talc is a carcinogen, when a country takes on that kind of leadership—that’s serious business. I was very proud to be a Canadian on that day. That’s a big alert. Now we just have to get talc off the shelves.

How has making this film changed your lifestyle?

I’ve cleared out my life. I use lipstick and mascara that are clean. I use one particular shampoo that has no phthalates or parabens, and it’s been tested. I use coconut oil. I use baking soda. I clean my house pretty much with vinegar and lemon. I think it’s important.

What needs to change?

The current regulatory system lets a product on the market before it’s been tested, so we have a problem and it needs to be fixed. We can influence our regulators, our government, our MPs. If you look at the EU, they’ve done extraordinary work in this field and have eliminated thousands of harmful chemicals from cosmetics. When things are banned in the EU, but we’re still using them, I think that alone should tell us we should pay attention. I hope it’s an alarm bell. I’m not saying don’t dye your hair and don’t use makeup. This is a discretionary thing. We can choose not to. We don’t have to use them.