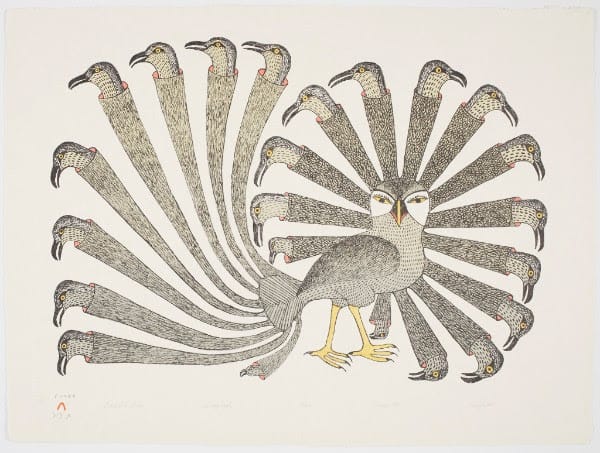 Established last fall, Tunirrusiangit: Kenojuak Ashevak and Tim Pitsiulak is the first major project to be presented by the AGO’s new Department of Indigenous and Canadian Art. This exhibit will undoubtedly have visitors exploring, questioning and learning about history (factual vs. contrived), Indigenous art, nature, politics, storytelling and Inuit life. All these themes and more are represented in this incredibly thoughtful exhibition that is striking, compassionate and reflective.

The exhibition showcases over 100 works on paper by Kenojuak Ashevak (1927-2013), often referred to as “the grandmother of Inuit art,” along with the work of her nephew, Tim Pitsiulak (1967-2016). Ashevak’s beautiful, bright colours and distinguished graphics are iconic, and it’s fascinating to compare and contrast against Pitsiulak’s more contemporary pieces, which share strong narratives of life in the north, the beauty of hunting, modern Inuit life and more.

Beyond the exceptional bodies of work by Ashevak and Pitsiulak, there are powerful installations like the constructed qarmak (a traditional sod house) with historical newspaper clippings pasted on the walls that document how the Inuit people have been represented in our most trusted news sources over the past century. A quiet sit in this space will allow gallery goers to reflect how media, from previous decades and today, feeds the narrative of Indigenous people.

As part of the exhibit,  Laakkuluk Williamson Bathory’s shares a video piece, Silaup Putunga, which moves between her powerful Greenlandic mask dancing and Arctic landscapes. “Silaup services intellect, but also environment and atmosphere. The closest equivalent in Canadian terms is a portal–a portal into another world.” This is a wonderful metaphor for the entire show: it is a portal to contemporary Inuit life as understood through exceptional Inuit artists. We hope you all hop in.

Tunirrusiangit: Kenojuak Ashevak and Tim Pitsiulak runs from June 16 to August 12, 2018 at the AGO. This exhibition is included with general admission.

Have you checked out the AGO’s new virtual school programs? FREE daily art classes for kids of all ages!