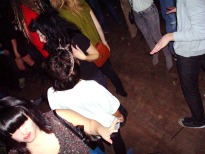 Got the weekday doldrums? Head out to Honey (455 Abbott St.) for Ice Cream Social, one of Vancouver’s longest running retro nights, and one of my favourite weeklies. It happens every Monday night, and they play pop from the 50s and 60s, sometimes mixing in a little good ol’ rock and roll. You’ll be twisting and shouting your way into an awesome week.

People get super into the theme, so feel free to dress up in your favourite fifties ensemble. If you’re feeling uninspired, head out to True Value Vintage (710 Robson St.) or F as in Frank for some inspiration.

The bar is pretty well stocked, so feel free to order a classic from the era. You may have to instruct the bartenders, but they’re usually quite accommodating to unusual requests. My favs are the gimlet (lime cordial and vodka), the Harvey Wallbanger (actually from the seventies, but totally amazing: vodka, Galliano, orange juice), or a classic martini.

The organizers have also started a night dedicated specifically to rock and roll from the era. Another dance party not to miss! This one is hosted at the ever popular Biltmore. They’ve even been kind enough to add a Friday night to their roster for those few individuals who have to be sober on Tuesdays.

It doesn’t get very busy until around midnight, but it’s fun to go early and lounge in the cushy chairs. Grab a drink and prepare yourself for a night of dancing. Trust me, it’s worth the weekday hangover.

Bees In The City: Learn All About Urban Beekeeping At Day-Long Workshop Intensive

From cocktails to charcuterie: our holiday party planning guide