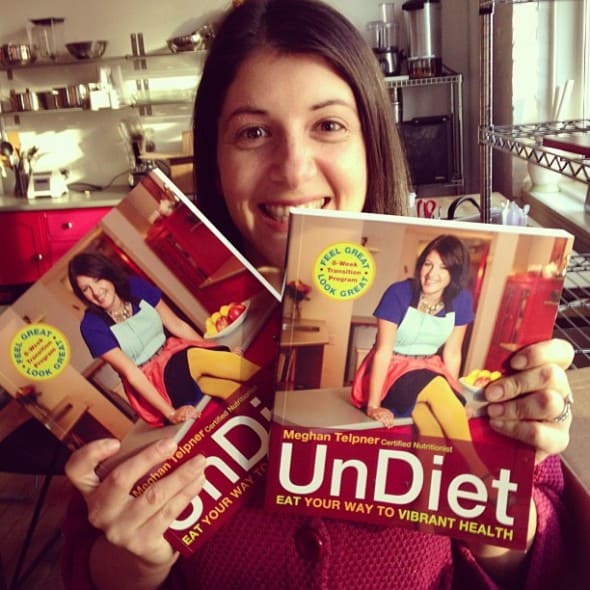 "She may look like a blissful hippie but the girl who wears striped tights and rides a bicycle decorated with fake flowers clearly possesses an entrepreneurial edge."

The grapefruit diet, the Atkins diet, juicing, raw food: there are literally thousands of cookbooks that tell us how we can eat to lose weight and look better. Wandering through a grocery store, we are met with so much low-cal, antioxidant, zero-sugar packaging that  labels read like foreign languages. Now, foods undergo serious processing in order to be marketed as “healthy.” If you step back and really examine the big picture, it doesn’t make sense. In fact, it’s a complete and total mess! Meghan Telpner’s new book, Undiet, cuts through all the bullshit and takes eating back to basics. Why not eat real food? Gee, there’s a novel idea.

A Toronto local who began making a name for herself hosting cooking classes in her Parkdale loft, Meghan Telpner’s Undiet, which hit bookshelves earlier this month, is up there with the latest cookbook offerings from Gwyneth Paltrow and Nigella Lawson. How? Why? Because Meghan’s approach to food just makes sense. Undiet is fun, colourful and full of mouth-watering recipes that are packed with nutrition and easy to replicate for novice chefs who shop at No Frills.

Meghan’s journey to good health began when she got sick. “My body imploded. That’s what happens when you’re stressed. You either explode like the angry people, or you implode like the sick people. Or you have a strategy to deal with the stress. Most of us aren’t taught strategies…you either get angry or sick. I got sick,” she says, while sipping an herbal tea.

When Meghan was twenty-six, she was diagnosed with Crohn’s disease. She was on her eighth job in three years and became physically too sick to work. Rather than simply taking drugs and continuing her fast-paced life, she took a three month hiatus in California, which became an exploration in self-care. “I needed a change of scenery and spent every day for three months learning to cook, going to acupuncture, discovering yoga, meeting a meditation teacher and going for long walks on the beach in the sunshine.” Her mom described this chapter as a Phd in life, Meghan refers to it as the world’s best insurance policy. It was during that time on the west coast that Meghan’s journey and commitment to overall health began.

Returning to Toronto, she enrolled in the Institution of Holistic Nutrition. “I needed the education to take care of myself, to stay healthy. That’s why I went, I didn’t know it was going to turn into a career.” It was during this intensive course that Meghan began to experiment with cooking. Two years later, in May of 2008, Meghan taught her first cooking class. She knew six recipes.

Yes, she was able to teach people how to make quinoa and yams totally exciting, but a class with Meghan was also full of quirky humour, storytelling and tons of easy information about nutrition. I went, and found it to be a very pleasureful and positive experience. I told my mom to go, she went. Then my mom bought a course as a birthday present for my little sister, Lizzie. We wrote about Meghan’s classes on Shedoesthecity and suddenly our readers were ditching their day jobs to become nutritionists. Or yoga teachers. Whatever. Clearly, Meghan was inspiring change.  Demand grew much bigger than what could be accommodated in a cozy kitchen at Queen and Dufferin.

From my desk, a few blocks east, I noticed that Meghan began offering online courses. Her website began to explode with international interest, she had a weekly food column in The National Post, was selling interactive juice cleansing courses to people on the other side of the world and organizing health retreats in St. Lucia. She may look like a blissful hippie but the girl who wears striped tights and rides a bicycle decorated with fake flowers clearly possesses an entrepreneurial edge. “Teaching in person was great but it was limited to people who were downtown and who could get to Parkdale by 6:30 on a weeknight…very limited. I wanted to reach more people and realised that through YouTube and online coach sessions I could,” she says. Meghan got creative and figured out how to make her information accessible and fun for a greater audience.

I ask Meghan what the ultimate goal of Undiet is. “I want people to read it and get it. I don’t want them to think that living a healthy life is some kind of deprivation.” Undiet offers an easy 8 week transition guide, there are 40 easy gluten-free recipes. She teaches you how to meal plan and there are nifty charts and easy tips that will make you feel like a nutrition expert. But more impressively, Undiet isn’t about just eating, it’s about choosing to live a better life. “Every choice counts. If you think that everything you eat is either going to build your health or build disease, it just becomes a question of which side do you want to be on?” That sounds a little scary, but she’s right. And once I, you, we start to make better choices, magical things start to happen. Meghan hated her job, she was sick and stressed out. By choosing to change the way she ate, she ended up improving every aspect of her life.

Guys, it all starts with an avocado.

Undiet is now available at Indigo, Amazon and everywhere for $24.99.