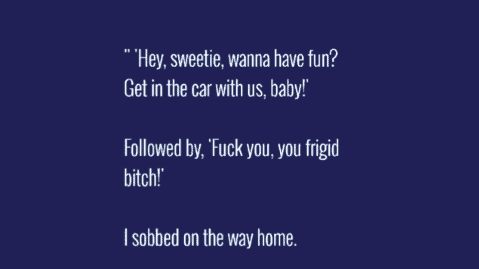 WATCH: ‘Give Me A Smile’ (And Other Catcalls We Can Do Without)

Karina Lafayette recently conducted a social experiment – she asked women to tell her some of the worst catcalls they’d ever heard. Many of the answers she got were (unsurprisingly) disturbing, so she decided to assemble them into a short film. This was the result:

We asked her what was behind her project.

SDTC: What got you thinking about catcalls in the first place?

KL: One thing that’s always annoyed me is how we tell women not draw attention to themselves. To stay neutral, passive, just be polite, and smile. Often I’ve had incidents where random guys would follow me in their car or yell at me, and instead of ignoring them, I’ll pull the middle finger or yell back. Of course, it’d be easier to stay invisible, but who wants to? Being in public doesn’t erase a person’s boundaries.

I remember in my early teens telling my mother or grandmother how uncomfortable I’d feel when an older man would ogle me. One of them would basically say, “When you’re older, you’ll miss it.” Miss what? Being objectified? It’s always seemed like I was the one who didn’t understand, since many guys who catcall use tactics like gaslighting to discourage a person from speaking out.

What surprised you the most when you heard other women tell their stories?

How big the conversation got! I honestly thought that only a few women would be open to talking about it. Catcalling is something we’re just expected to deal with, and that’s the scary part. The fact that it’s considered normal. The fact that even the president of the United States gets away with it.

Why do you think catcalls are still around in 2017?

Catcalling has been in our culture for such a long time that I think a lot of it has to do with being stuck on autopilot. The only way to get rid of it is to be mindful of how we treat people. Too often our sons are taught that they can get whatever they want, and we raise our daughters to be flattered by any attention they get, even if it’s unwanted.

What do you hope to do with this video project?

The plan is to submit the film to TIFF and other festivals. I know the film being uncensored might make some viewers uncomfortable, but that’s point of the point. So we can walk in another person’s shoes. In fact, there are a few scenes where the camera is from the perspective of my character’s shoes. As a filmmaker, I want my audience to know their experiences matter. I don’t want anything to be sugarcoated.