When a trailer evokes a rush of feelings so strong that you feel your body get tense and heat up,  you know that the film is going to be incredible.

Jane Campion is a master of cinema—we’ve known that since we first watched The Piano nearly 30 years ago. The Power of the Dog was an audience hit at TIFF this year, and worldwide rumblings suggest that it is slated to be a major contender come award season. We believe it.

The year is 1925. The Burbank brothers are wealthy ranchers in Montana. At the Red Mill restaurant on their way to market, the brothers meet Rose, the widowed proprietress, and her impressionable son Peter. Phil behaves so cruelly he drives them both to tears, reveling in their hurt and rousing his fellow cowhands to laughter – all except his brother George, who comforts Rose then returns to marry her. As Phil swings between fury and cunning, his taunting of Rose takes an eerie form – he hovers at the edges of her vision, whistling a tune she can no longer play. His mockery of her son is more overt, amplified by the cheering of Phil’s cowhand disciples. Then Phil appears to take the boy under his wing. Is this latest gesture a softening that leaves Phil exposed, or a plot twisting further into menace? Whatever the case may be, the trailer had us hooked and wanting more. 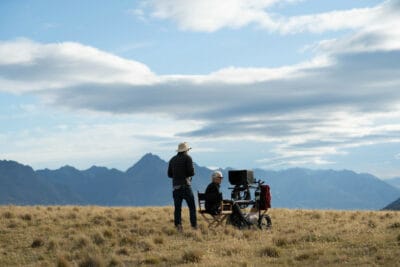 Critics are raving about the performances by Benedict Cumberbatch and Kirsten Dunst, calling it their best work yet. The Power of the Dog opens in select theatres and November 17th, and arrives to Netflix on December 1st.