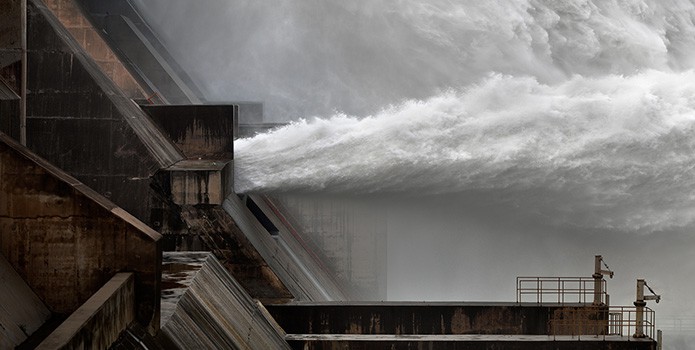 In 2006, documentary filmmaker Jennifer Baichwal followed world-renowned photographer Edward Burtynsky to huge factories in China and mountains of cell phones in Indonesia in the award-winning documentary Manufactured Landscapes. It was haunting, visually stunning and totally disturbing.

For Watermark, they teamed up as co-directors and travelled to ten countries to better understand and document how humans interact with water: how we change it and how it changes us.

From the construction of Xiluodu Dam on the Yangtze River in China to the Kumbh Mela festival in India where 100 million pilgrims make their way to bathe in the sacred waters of the Ganges river, Watermark will take you on an epic journey around the world.

Like all of Burtynsky and Baichwal’s work, the images and stories captured in the film are incredibly powerful, emotional, arresting and, at times, distressing. This film will have you questioning everything from your spirituality to overall human survival on this planet. You might even think differently about how you brush your teeth.

This weekend, you have two opportunities to watch the film and ask the directors questions afterwards. On Sunday, there will be also be a conversation with Baichwal and Burtynsky at Indigo Bookstore at Bay and Bloor.

These two are both heroes of mine. They make brilliant work that makes you see and think about the world differently. I highly recommend! Watch the trailer now.

Q & A following the 7:25 pm show at Varsity Cinemas

In Conversation with directors at 3:00 pm on lower level of Indigo Bookstore at Bay and Bloor