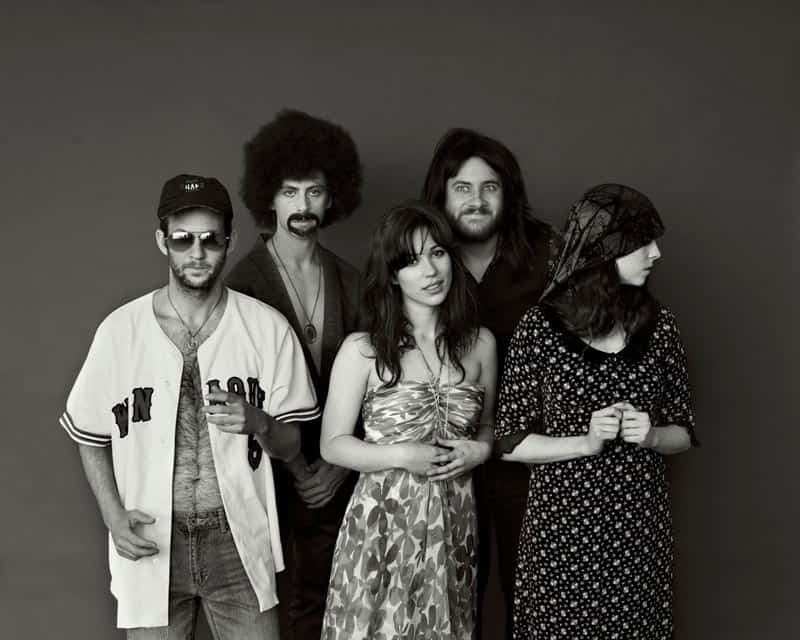 "I know there are some musicians who are like, 'A cover band...?' but all of us have no shame."
Career

Have you been to a Dwayne Gretzky show yet? If not, you really need to. This cover band, loosely named after a certain Canadian hockey legend, is nothing short of fantastic. Comprised of a slew of talented Toronto musicians from various other bands, Dwayne epitomizes what it means to have fun at a concert—for both the musicians and the audience.

The band is taking over The Great Hall (1087 Queen St. W.) to play Fleetwood Mac’s epic Rumours album from front-to-back on Tuesday, April 16—the same night that Fleetwood themselves will be playing the ACC. It’s a genius idea, and it’s going to be amazing. We sat down with Dwayne female regulars Allie Hughes and Robin Hatch to discuss the show, what they’d say to Stevie Nicks if they could, and why these years are the best years.

Shedoesthecity: So why Fleetwood, and why this album?

Allie Hughes: I think Fleetwood Mac was a great choice because we have the girls and the guys. I think it just kind of suits us. And we all love the album.

Robin: What we’re trying to do is rekindle that magic quality of when they were still performing in the ‘70s.

SDTC: You’re a cover band that has done very well for yourselves. Why do you think that is?

Robin: The band works hard to select songs that everybody in the audience is going to know and be able to sing along to. It’s kind of an inclusive cover band experience rather than just a band playing Sweet Home Alabama and The Boys Are Back In Town, not really thinking about what the audience wants to hear.

Allie: I think a lot of work goes into the song choice—they’re all hits, they’re all songs that are known, but it won’t always be the obvious choice. I also want to give a shout-out to [band member] Tyler [Kyte], because he writes the set list and puts so much work into it. He’s so good at keeping the energy flowing.

Robin: It’s almost like a narrative, choosing songs. When people ask what kind of covers we play, it’s hard to say. We really just try to find all of our favourite songs from the last 50 years, and make them sound as authentic as possible.

Allie: Basically with every show we play, the audience leaves having had a good time, and I think that has a lot to do with flow.

Robin: From my personal experience, sometimes I go to shows in Toronto and I’ll feel uncomfortable about letting myself go and really having a good time in the audience. And I think that everyone in the band has felt that way once in their life and wants everyone in the crowd to have the best time possible.

SDTC: What’s the difference between being in a cover band and playing your own music?

Robin: There’s no stress of having your personal creative work at stake.

Allie: I’m never nervous before Dwayne shows. If I’m playing my own stuff I’m so full of fear and apprehension and anxiety.

Allie: It’s the best hang ever. It’s such a good hang. I’m such a hermit that it’s like my social time. We all get along really well. And it’s so informative, as a music writer, learning new songs; you learn so much about writing good music. I know there are some musicians who are like, “A cover band…?” but all of us have no shame.

SDTC: Are there any special surprises for this show that people can anticipate?

Allie: Robin’s parents are going to be there! [Laughs] Let’s say this: There’s a lot of heart and love going into it, and it’s not going to be gimmicky at all. Down to what we’re wearing and doing with the lighting, we’re being very thoughtful and tasteful with it and trying to give people a really legitimate experience.

Robin: It’s a lot tougher than people think. They’re pop songs but there’s a lot that goes into them.

SDTC: If you could meet Stevie Nicks, what would you say to her?

Robin: “I like your hair! You have really nice style!” [Laughs]

Allie: I guess I would ask her about her process for writing lyrics because I love her lyrics.

Robin: “How’d you put up with the haters?”

SDTC: Do you have any advice for women who are taking risks in their careers?

Robin: I wish I had been told from an earlier age to think that what I’m doing is cool, and to just do it as much as possible.

Allie: Now’s the time. Get on that crazy train and just go for it! We’re all gonna die [one day].

SDTC: How hard is it to be a professional musician in Toronto?

Robin:  With a part-time job and all the shows I play I’m able to break even, and I’m happy that I’m able to get by.

Allie: With Toronto, there are ways to do it. Everyone I know who’s in a good band also has a part-time job. It’s not poverty, or anything. But I’m in high overdrive. I have $50 to get me over the next few days. It ain’t easy. But we’re happy! We’re young and excited.

Robin: We’ll look back and go, “You know, those years of our lives really were the best years.”

Allie: These really are the glory days.

Dwayne Gretzky performs all of Fleetwood Mac’s Rumours on Tuesday, April 16 at The Great Hall (1087 Queen St. W.). Doors 9pm. Buy tickets here, in person at Rotate This and Soundscapes, or at the door while quantities last.

"I know there are some musicians who are like, 'A cover band...?' but all of us have no shame."