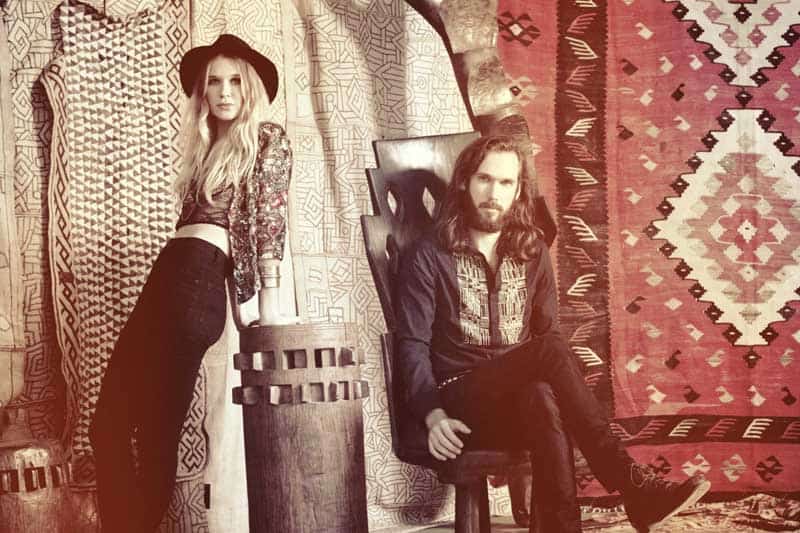 After three weeks of touring with Toro Y Moi, sister-brother band Wild Belle finally landed in Toronto on Feb. 17. It was Wild Belle’s first time here, but you’d never know it from the sold-out crowd. Wild Belle, originally from Chicago, is undoubtedly on the path to fame—their debut album Isles drops with Columbia Records on March 12. Singer Natalie Bergman’s years in the biz make her a natural performer, and her voice is not worth risking with comparisons to other artists. Her knowledge and spirit only further the power of the electronic, jazzy, ska-reggae blend that is Wild Belle. Under her big brother Elliot’s watchful eye, here’s a girl who has been living, breathing, and studying music like it’s her job, since childhood. And now music really is her job! We caught up with her before the anticipated Lee’s Palace gig to discuss her music—and a whole lot more.

SDTC: You’ve been touring around and keeping everyone updated on Facebook with postcards and photos. What has been your favourite unexpected spot so far?

Natalie: One of our favourite shows was in El Paso. There were tons of kids that came over from Mexico just to see Wild Belle. And it meant the world to me, you know? There were 30 kids from Mexico that were just huge fans. That’s unexpected because we didn’t realize that we had a following in Mexico.

SDTC: Your music is difficult for some to describe. Where do the ska/reggae influences come from?

Natalie: When I was in Grade 7, my brother gave me a couple of records for Christmas. One of them was this compilation of Studio One artists. Studio One is a recording studio in Jamaica where lots of great artists recorded their records during the ’60s and into the ’70s and ’80s. I fell in love with this song called “Dreamland” by Della Humphrey. It’s an amazing tune. And I was thinking, “This rock steady music is kinda making my heart feel all sorts of things.” I loved it, I fell in love. Then I went and researched every kind of Jamaican movement. Ska is great; I love rock steady. I love that era of music because it’s sort of slowed down.

SDTC: Who’s a musician that you’ve listened to your whole life?

Natalie: Astrud Gilberto—she was Joao Giberto’s wife. They were a Brazilian sort of love story, like this duo that everybody adored. And Joao Gilberto has this record with Stan Getz, who’s a saxophone player, and he’s amazing. The record that he and Stan did together is one of my favourite records ever. I can’t stop listening to them.

SDTC: Who are some female artists, dead or alive, that you have the utmost respect for?

Natalie: Etta James. She just died. I was sad about that. And Astrud Gilberto.

Natalie: I used to rescue frogs and salamanders and toads from the swimming pool by my house. They would just fall in from the trees after a storm, or they’d think it was a pond. I would get up really early in the morning, at like five. If I didn’t wake up in time to rescue them from the pool they’d OD on chlorine, which sucked so much. I would be like, “Nooooo! I woke up too late!” I was probably four-years-old—and that lasted until about last year? [Laughs]

SDTC: When did you start making music with your brother? Did you have a little band as children?

Natalie: Well, we’re eight years apart. So when I was growing up, it wasn’t necessarily like we were performing together; it was more like he was just turning me on to things and tipping me to different records, different movies. He has an extraordinary capacity. The way he receives and perceives the world is very beautiful. He shared his style and influences with me, so that’s how our musical relationship began. He got me really turned on to a lot of Jazz artists like Pharoah Sanders. When I went to college, that’s when we really started working on music together. I was just sending him demos and he’d send me demos, and then finally he just invited me into the studio and we made a record in a very short amount of time. We liked the sounds we were achieving.

SDTC: I heard that you guys actually recorded Isles a while ago. How do you feel now that this album is actually going to be released soon?

Natalie: I can’t wait. I’m going to die, I’m so excited. Seriously, it’s been a year since we recorded our record. So, it’s time. I can’t wait to get back into the studio and make another record.

SDTC: Working with your brother, what’s the collaboration like? Who does what?

Natalie: The way this record was created was, I brought in a bunch of demos I had written over the past few years and recorded on my Garageband. I just brought in the skeleton of a song. I’d maybe put a little beat down and put lyrics and other little touches. Then we’d rework it in the studio. He has his own style that I love; he just adds his flair to the music and takes it someplace that I would not have imagined on my own.

SDTC: Do you have a favourite of your music videos?

Natalie: Backslider because my little brother Bennet and I made it in my backyard, in a night. It’s just very much a part of me. That’s how I want to do all my videos. I like my other videos, but I want to be the director, you know? Seriously, from now on I am the director of my music videos. I loved making the other ones, but I think that I like being fully in control of things.

SDTC: How important is it for every aspect to come from you?

Natalie: You know, you think it’s great to collaborate with people. But, I trust my brother. He is my brother and that’s it. There was a point in time where I thought it would be amazing if I could work with all of these people that I really respect. But sometimes it actually doesn’t work out the way you imagined or desired it to. And I just like to be in control of everything. When somebody else has a direction that they’re trying to steer me in, I just—I can’t. Fuck that. This is my destiny and I rule it.

If you haven’t already fallen for Natalie, watch the video from Wild Belle’s performance of “Keep You” from the Mulberry MixTape Tour and you will instantly be hooked.