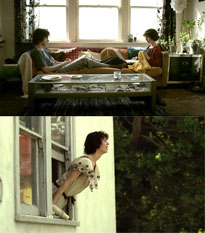 We have a talk with Miranda July about 'The Future'

Miranda July talks with her hands. It’s neither deliberate or accidental. She does it ever so often for emphasis. She’s reminiscent of Sophie, the protagonist from her latest film, The Future. It’s the same doll-like monotone, undercut with an endearing, wide-eyed awkwardness.

“I was trying to put a lot of things I don’t like about myself into my character,” shrugs July, as we talk about her film.

In The Future, Sophie (Miranda July) has reached an impasse with her life. In her late thirties, a dance teacher and living with her boyfriend, Jason (Hamish Linklater), Sophie’s life has reached a standstill. In an effort to resolve this, Jason and Sophie decide to adopt a cat, Paw Paw, who in a month would be coming to live with them. They quit their jobs, disconnect their internet, and attempt to live their lives in a fearlessly open way.

Their new life involves creating “thirty days of dance” youtube videos, or becoming a door-to-door solicitor–attempting to convince the citizens of Los Angeles to buy trees. However,  for the couple, their new passion projects aren’t going as planned. Underneath a veneer of tenuous naiveté are shades of discomfort, something that July was interested in exploring.

“There’s doubt and paralysis, and sort of self sabotage and all sorts of discomfort. Sometimes it’s funny discomfort, and sometimes it seems almost exciting.”

As much as The Future operates on the idea of freedom, the question becomes whether Sophie and Jason’s decisions are truly liberating, or simply delaying the inevitable. It’s fear that motivates Sophie and Jason to act, react–or in one of the film’s most crucial scenes, to freeze the world. All this terror was integral to July’s character.

“I wanted someone who’s so afraid of failing themselves, that it truly seems like an option to flee your own soul, and flee her whole whole identity and that seems preferable to having to endure being herself.”

All of this slow-moving chaos is observed, and narrated by PawPaw, who from a veterinary hospital cage, awaits the return of the people who found him.

“I wanted [the film narrated from] something that was very outside the couple’s world. They’re very kind of necessarily self involved and a little blind and I wanted one character that was very open, and very clear and honest in a way that you can’t really do with a human character.”