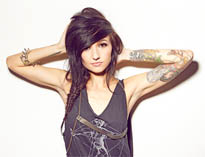 We sent our teenage writer, Nilou, to see her pop-rock idol, LIGHTS and she finds out what her favourite sandwich is

Nilou is just shy of eighteen. Racking my brain, trying to figure out what assignments we had that were kosher for a teenager, I asked Nilou, “Would you maybe be interested in interviewing LIGHTS and checking out her show at Sound Academy with your BFF?”

The response was something like this, “OMG….yes! YES! I love her! She’s one of my favourites! Puleaazze!”

We called our friends at Universal and hooked it up. (Thank you!) Last weekend, Nilou bussed down to The Sound Academy to meet the tattooed sweetheart who she has been a loyal fan to since they first met in 2008 at MuchMusic’s Much On Demand. Although Shedoesthecity was entering its second year at that point, Nilou was just in grade nine. Aww! Here’s how there second meet and greet went. And as Nilou will tell you, Ke$ha ain’t got squat on our homegrown hottie.

In just 4 years, Lights went from playing at local Toronto nightclubs like The Rivoli and El Mocambo, to a sold-out hometown show at the Sound Academy last Friday night. She has bloomed into a pop sensation with her dreamy vocals and laser zapping beats. Lights played the perfect combo of hits from her debut album “The Listening” along with a couple songs from her recently released album, “Siberia“. As always, this super talented 24 year old stunned the crowd with her talent and energy, and ended the night with an acoustic version of her 2008 single, “February Air” as she told us the intimate story of her lonely move to Toronto where she discovered her sound.

Before the show I had the awesome chance to meet her where she brought out her beloved acoustic guitar for a little mellow jam session. I must say, Lights deserves 9.9 goosebumps out of 10 for her voice. She doesn’t need a Ke$ha auto tune or anything. Every note is crystal clear and on point. Basically, you could say she’s part angel….and a little aqua-phobic as we discovered in a mini Q&A with the WoW celebrity.

What are 5 things you cannot survive without on tour?
– laptop
– facewipes
– hairspray
– acoustic guitar
– internet

What does your perfect sandwich consist of?
A wrap with brie and avocado.

Is there any specific band or artist you’re digging a lot these days?
Radiohead is making a comeback in my life currently.

What is a perfect, ideal Saturday for Lights?
Roll out of bed (carefully, I sleep in a bunk both on and off tour) and hit Starbucks for a breakfast wrap and tea latte, cruise around to stretch the legs (if it’s nice) and the rest of the day should consist of a perfect balance of both productive and recreational activities. For example, 50% xbox or Warcraft, 50% song writing/painting/playing. I need to feel productive to be satisfied.

If you could have any other pet besides Lance what would it be?
If I can’t have Lance and I can’t have a cat (some people in my life are very allergic) I would like a panda please.

Make sure to check out one of her most played songs, “Flux and Flow” off the new record, “Siberia” if you’re into electro pop with a little dab of Skrillex bass.