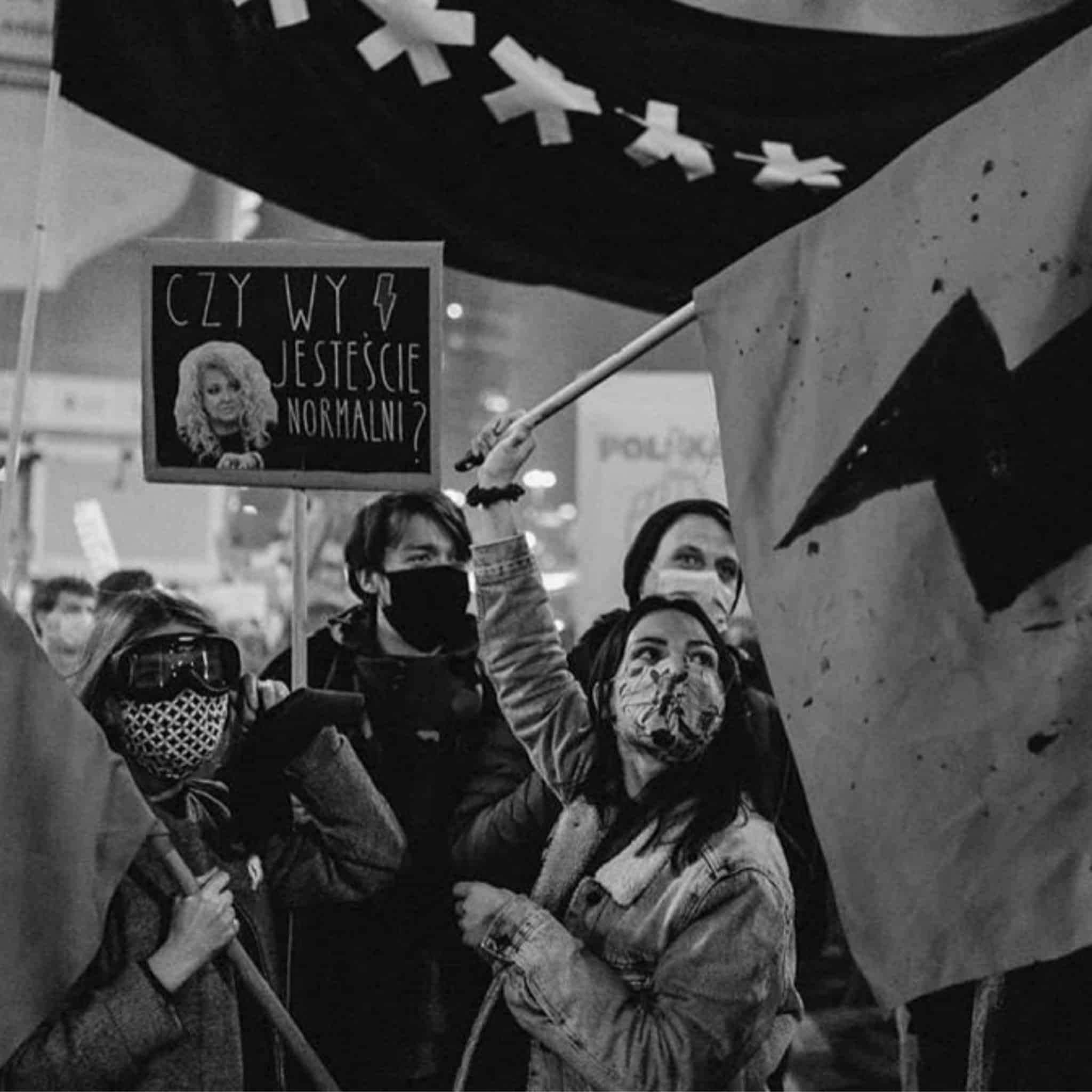 We were nine years old and excited about having to move from the boring old classroom in the nun’s dorm to the basement of the Catholic church to attend our Wednesday religion classes.

We heard rumours about the basement; there was an artistic exhibition there of some sort, something grown-up. This was in the 1980s, in communist Poland and sending kids to those classes was a political fuck-you to the government who was anti-religion. I was into Jesus and happy to do things like sign a purity document that promised I wouldn’t swear, wear make up or kiss boys. But the most fascinating thing I learned about in that room every Wednesday were ‘the lessons’ on abortion.

On the walls of the brick room hung dozens of blown-up photographs of what appeared to be bloody baby mice and their parts. But on close inspection, the images turned out to be something else entirely. In the corner of the room stood an old-fashioned stroller filled with soil and a cross stuck in it with  candles lit up all around. The artist exhibition surpassed all of our expectations; we had so many questions! They were easily answered in the pamphlets strewn around on tables. 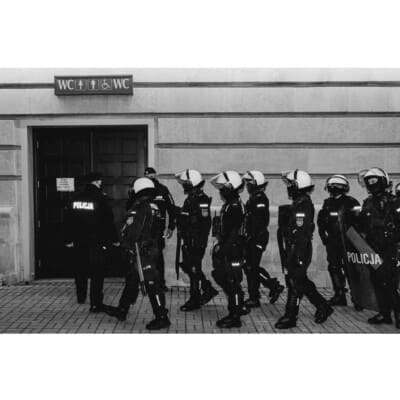 My mother was pregnant at the time with my sister. My sister was born at “a minimum age of viability”—a definition I also learned in that room (there was a bloody picture included for reference).

Thirty-four years later, the church in Poland is disproportionately more intrusive, inappropriate and far more dangerous, and now the church is also the government. But people are fighting back—the 2020 protests have been especially powerful, with tens of thousands of men and women shutting down entire cities to rally against the latest crazy on abortion. I am in Toronto, watching all of it from afar, frustrated that I am afar. I see my Polish friends post footages on socials, from various demonstrations they go to and I feel guilty that I cannot be there.

It is only because of random circumstances that I live in a place where the government lets me be in charge of my own body. I take my privilege for granted, and for many of my closest friends in Poland, this is a privilege they have never experienced. They march with their kids who are growing up in a country where human rights are in deep peril. Canada is a complicated place as well, but at least the authorities leave our bodies alone (well, that’s a lie, as we did force sterilization on Indigenous women till 2018—in some cases despite them expressly denying consent).

Over the past few weeks, I’ve had thoughts of jumping on the plane but it would be hugely irresponsible for obvious reasons (quarantine, corona), and as it turns out there are protests happening across Canada as well, including virtual ones.  The protests were triggered on October 23rd as a response to Poland’s constitutional tribunal that has deemed abortion due to fetal defects unconstitutional. This makes the Polish abortion laws some of the most draconian in the world—up until the ruling, the most common grounds for abortion in Poland were fetal defects. Once the ban goes into the effect, the only legal grounds for abortion will be rape or incest or when the pregnancy threatens the mother’s health. A newborn dying in agony from multiple birth defects, on delivery, is not a good enough reason. (But the fact that that kind of an example has even become an argument in this “battle?” Please.) 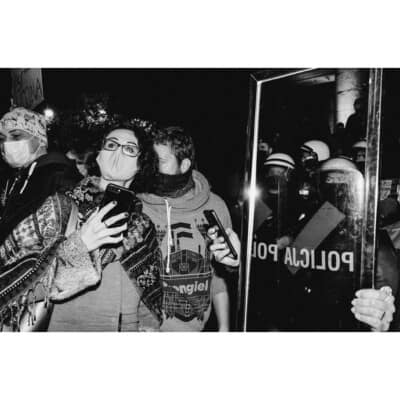 As of writing this article, on November 3rd, the Polish right-wing government, Prawo i Sprawiedliwosc (Law and Justice… ), has stalled with putting the abortion ban in effect—as the result of the two weeks of the protests. It’s exhilarating to read this news, although I know it’s been exhausting to be a Polish woman (or a girl) when regulating our bodies and pregnancies has always been a problem.  Even during my early youth, when abortion was perfectly legal under communism, it was a tricky and conflicting situation because everyone was at least politically Catholic and Catholicism treats abortion as mortal sin.

In 1993, the laws on abortion in Poland became some of the harshest in the world and abortion tourism became a thing. My first summer back, I went to see my first gynaecologist where I got a brief lecture about how difficult it would be for a young girl like me to travel to Czech republic. A frowny woman in thick-glasses asked about me having lost my virginity prior to going on birth control. Legs, in stirrups, I breezily told her it was fine, I lived in Canada. We were civilized there. In that exact moment, my privilege kicked in. I was 15. I couldn’t wait to get the fuck out. Two years later, again, in Poland, I went to another gynaecologist and pretended to be a foreign girl who had too much drunk fun and needed a prescription for Plan-B. I was, in fact, getting that prescription for my friend who was too scared and embarrassed to tell her own doctor. The whole operation seemed more complicated than scoring Class-A drugs. It was hilarious. It was ridiculous.

The social-media posts about the 2020 protests made me think that there was a real revolution happening. And maybe there was. It was impossible to tell. I’ve asked my Polish friends to tell me how the situation was in smaller towns where the Catholic church keeps a tight grip on women’s wombs—those are the places that are populated by voters who tend to lean right.

On my end, I joined a virtual protest here in Toronto. I wanted to go in person but my kid was sick and we didn’t have the COVID results yet, so we had to isolate. I explained the best I could what was happening, when he asked. He is now two years older than I was when I took those religion classes on Wednesdays. 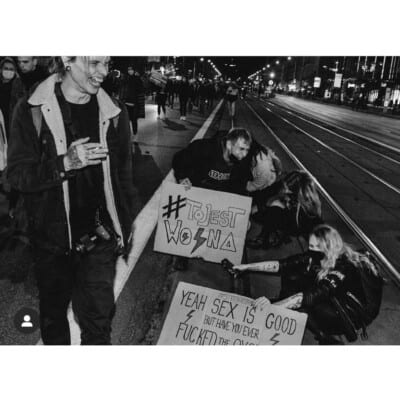 Watching the rally on the screen, I felt a little closer to my sisters in Poland, knowing I was only an hour-drive away from the events (instead of eight, on a plane). It was a fair-sized crowd. My son watched with me.

After posting on one of the Polish forums in support of the protest, it took less than 20 minutes for the first troll to show up and attack me. Soon, others joined. Someone Googled and made fun of my battle with addiction.  The same person said women who protested deserved to be punched (he was referencing an attack on women, in Warsaw, by soccer hooligans). I felt less guilty than I usually do about my son not understanding my native language.

Pictures of crucified fetuses followed. I slammed my laptop shut.