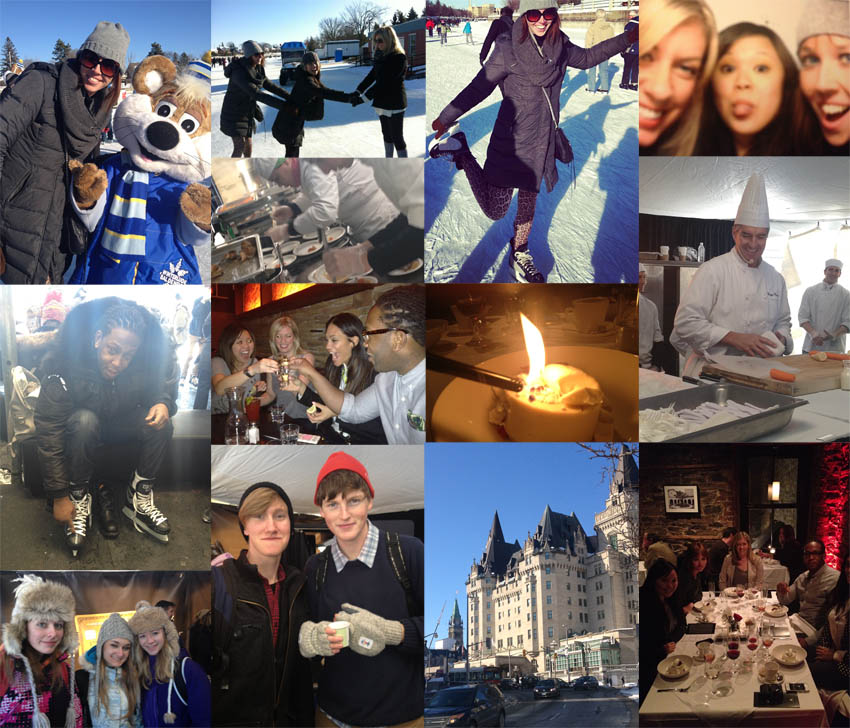 What is an Amex Ambassador? And why does it involve ice skating in Ottawa and liquid nitrogen bread?

Yes, I am one lucky duck. American Express Canada launched a program this month where four Toronto bloggers will act as Amex Ambassadors for 2012. It’s a fun group consisting of Lisa Ng, from HipUrbanGirl; Catriona Smart, ofCoco and Cowe; the hilarious Tyrone Edwards, of 1LoveTO; and myself.

Essentially, all of us get to experience the cool things that American Express offers its Cardmembers. From Front of The Line access, to Amex Delights, to Membership Rewards, I’ll be sharing all these unique experiences and services with you. Your Amex Card doesn’t just get swiped at Holt Renfrew; Amex works with a variety of partners on a ton of cultural happenings –  and while offering Cardmembers some serious perks. Have you heard of Front of the Line? Oh, I’ll fill you in, but first let me share my Winterlude weekend in Ottawa.  Amex has been a proud sponsor of this fun winter festival for the past seven years, and wanted us to experience some of the best activities and cuisine Winterlude had to offer.

Truth be told, heading North to our conservative capital mid-winter wouldn’t be my first plan for a weekend of fun but then, I’m not always right. Flying on the beloved Porter Airlines(can anyone say a bad thing about this airline?), we arrived in Ottawa on Friday afternoon for two jam-packed days of Winterlude wonder. American Express has been partnering with the winter festival for seven years and, at its core, it is a perfect way for locals and tourists to really embrace the magic of wintertime in Canada; skating on the Rideau on a sunny day was – I’m going to sound like my mother – glorious. But that’s just one element.

Similar to Toronto’s own Winterlicious, Taste of Winterlude offers special, sumptuous dinners at a variety of Ottawa’s top restaurants. On Friday, we were invited to a special kick-off dinner at the National Museum of Civilization hosted by famed Chef Lynn Crawford of Leslieville’s Ruby WatchCo. Like her restaurant, we were plated with delectable comfort food and then shared side dishes ‘family style.’ I totally hogged the lobster mashed potatoes, which was noticed by my fellow dinner guests. I apologize, but they were irresistible.

Following dinner, guests were ushered outside to watch a firework display that could rival New Year’s Eve in Sydney. OHMYGOD, I practically cried; it was beautiful. And it seemed to go on forever. Thousands of families, couples and teens gathered by the Rideau to watch the bridge explode with majestic sparks. With the Chateau Laurier in the background, this was Ottawa in its finest hour.

On Saturday, we laced up our skates and glided down the canal with rosy cheeks and cocoa in hand. Amex had a lounge that invited all to come in for live cooking demonstrations, photobooth fun and free hot chocolate. (Amex Cardmembers were also gifted locally made jam.) Located right on the Rideau Canal, we ate quail and morels on a snowbank; how totally civilized. Skating alongside babies being pulled in toboggans, lovers holding hands and entire families linked arm-in-arm was possibly the most wholesome Canadian thing I’ve witnessed. Yeah, I like my basement bars on Ossington and late-night Kensington haunts, but this was really special. I had a permanent smile as I criss-crossed my way downtown. People, this is worth the trip to Ottawa in itself.

Come nightfall, the Ambassadors met for a lively Fire and Ice dinner at The Courtyard restaurant – another Taste of Winterlude dining experience. We ate liquid nitrogen bread and watched a lady spin out of control in a hula hoop lit up with flame. Wicked.

Although not on the itinerary, I made a point to go visit the stray cats of Parliament Hill. This has nothing to do with Amex but observing cute kitties sharing kibble with squirrels is a very high priority for me. Meow-meow-meow.

All-in-all, it was a fabulous way to embrace winter and a perfect way to kick off a year of fun with Amex. I take this Ambassador stuff seriously, you know, and am proud to be a part of this neat-o initiative.

Wanna follow along? Check out the American Express Canada Facebook Page to see what fun events Amex has in store for us – and their Cardmembers – in 2012.