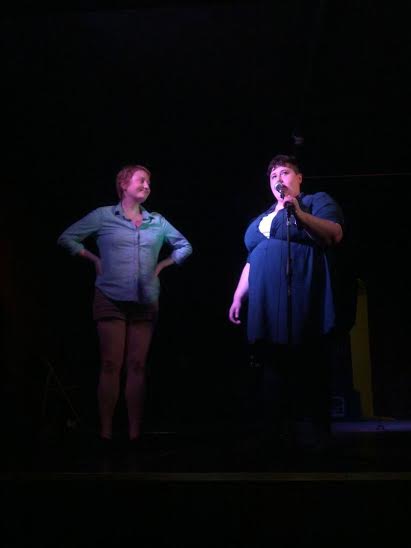 "Don't take it personally. These are the times you back off and let things alone. The person who needs help gets to decide when and if you will help her, and in what capacity."

When Your Friend Has Cancer

Alicia came into my life one day and right away she belonged there. I first met her when I performed on her storytelling show (soon to be named Raconteurs Storytelling). She’s a no-nonsense strawberry blonde with huge blue eyes and a killer fashion sense, and I liked the cut of her jib. Then she came and watched me do stand up twice in one night. From then on, I was smitten.

Alicia gives you the hardcore real talk you need, even if it stings a bit. I have turned to her in many a dark hour for spot-on advice. She rolls her eyes when privileged feminists argue about superficial nonsense, and rightly points out that we should focus on the fact that Native women are dying and being assaulted every day without justice in this country. Alicia is a woman of action, and I love her for it. We started running a live literary event together, and then a Young Adult book club. Just a coupla smart bitches getting shit done without apology.

At some point early on in our friendship, I found out Alicia had cancer. I was shocked. She’s the same age as me, just a smidge past thirty. She didn’t even seem ill at the time. What’s even more shocking is that this is her second go-around. Her first time was when she was just 22.

One of our first times hanging out outside of performances was when she invited me to join her and some of her friends at her bell-ringing ceremony. This is a small commemoration that they hold when you finish a course of chemo. Due to past medical trauma, I normally avoid hospitals. I went anyway (like I said, Alicia makes shit happen).

When I got to the tiny chemo room it was stuffed with cool creative people, all waiting for Alicia’s turn at the bell. Turns out there was some change in her medication and the ceremony was delayed. We ate cupcakes and sat around chatting. I had to leave to go back to work but I was glad I went anyway—I met some really cool people. I left Alicia hooked up to some kind of IV, holding court in a room stuffed with good-looking hipsters and cupcakes. Hardly what I’d expected when the words “cancer” and “chemo” came up.

Months later I visited Alicia in the hospital. We chatted for a few hours and realized it was after ten at night. “Don’t I have to go home now? Isn’t someone going to kick me out?” I asked. She shook her head, because I just didn’t get it. “This is the cancer ward, Catherine,” she said. “They kind of let us do what we want.” I was leaving to go out dancing and I jokingly asked if I could come back drunk later and sleep in her hospital room. She thought about it for a minute. “I might have to pretend to cry, but yeah, probably!”

In addition to her other projects and accomplishments, Alicia is one of the best writers I know. Her blog is a thing of beauty. It’s exists in part to update friends and family on her condition (something that didn’t occur to me before—the sheer exhaustion of keeping people updated about your cancer). The blog is a stunning and often difficult documentation of her journey through treatments, setbacks and trials. The blank honesty I have come to know and love from Alicia takes a different turn when I read posts that begin, “I had 4.25 litres of fluid drained from my abdomen yesterday” or “Greetings from the bathroom floor…I’ve just been hanging out here, dry-heaving for the last 45 minutes.” There needs to be a word for loving someone’s work and dreading it at the same time. Importantly, she writes about what cancer is like, day to day. Be sure to read this post about her friend who passed away. And this one about one of her hospital roommates. And her Origin Story post which details her first round with cancer at 22.

I’ve learned so much from Alicia I don’t know where to start. She’s challenged my preconceptions about illness and what it actually means to have cancer. I’ve watched her stare down nurses who weren’t listening to her, and insist patiently but firmly that it be done according to her needs. I’ve heard her explain the intricacies of her particular cancer in layman’s terms to a crowd of bar-goers who listened while glibly huffing away on cigarettes. I’ve looked her in the eye as she explained that there is no cure for her cancer. To say those words, to know them to be true and to power on anyway blows my tiny mind over and over again.

I’ve also learned what it means to be a friend and ally to someone who has cancer and is routinely hospitalized. Here’s a brief list of what I’ve learned so far:

Leave your emotions at the door. Your friend has enough on their plate, don’t add dealing your your feelings about their illness to the mix. I once told Alicia that I wanted to hold her like a baby and cradle her. It was a weird moment, but luckily I did not creep her out forevermore. Remember—a lot of your feelings are probably more about your own sense of mortality, which you can deal with on your own or with a therapist. Your friend has more important work to do.

Listen, and don’t get weird about it. You’re gonna hear about wigs, or gross medication side effects, or how someone they met in a support group is going into hospice. You’re gonna be nonchalant when she talks about the ins and outs of various surgeries, or catheters, or tumour sizes. You’re gonna crack only a couple of dick jokes, and only when they are most necessary.

Always ask to help, sometimes she’ll take you up on it. When Alicia was in the hospital, I would ask in as un-annoying a way as possible if I could help. A couple of times she told me she wanted non-hospital food. We’d arrange a time and a food, and I’d show up to the hospital with a little sack of Japanese noodles or burgers and fries (yes, I brought burgers and milkshakes to the cancer ward, sue me).

Accept when your help isn’t needed. Don’t take it personally. These are the times you back off and let things alone. The person who needs help gets to decide when and if you will help her, and in what capacity. You can’t just show up with a crate of mangoes and the offer to be their live-in mango peeler. They almost certainly don’t need that. They know what they need, so just ask.

Don’t piss off the roommates If there’s a hospital roommate, treat them like your grandma—approach quietly and don’t disturb their rest. If you fail to resist the urge to tell dick jokes, they will have something to say about it later. Trust me.

Respect her autonomy. Her illness, her choices of treatment. Not yours, not her family. If your friend takes a course of action that seems risky, assume she has the full ability to assess her needs and choose the best option for her and her body. The last thing someone needs after making an agonizing health decision is to have a friend second-guess it. When you hear about these things, simply support.

You can’t cure her. Read an article about how people in Guam are curing cancer with the droppings of a rare wild antelope? Keep it to yourself. Don’t suggest any “superfood” cures or pseudo-science crap you read about in line at Whole Foods. She’s got doctors on this and people from all over the place are trying to shove their weird creative cures down her throat.

When Big Help is needed, step in. Myself and a few other friends are currently trying to help fundraise so that Alicia can get into a clinical trial out of the country. We asked if we could help and when given the go-ahead, we did. For me, that meant pushing her GoFundMe page on social media and sending out emails to my family and friends, anyone I know would be able to give a few dollars. I knew if the role were reversed, I know Alicia would not hesitate to do the same for me.

It’s never gonna be fair. Everything about this, all of it, seems so fucking brutally unfair. Because Alicia isn’t some wan heroine in a Victorian novel who is wasting away. She kicks ass and takes names. She’s explained brilliantly why she doesn’t even abide by the phrase “cancer survivor”. She gets more done in a day than most people I know do in a week. A month, even. She seems invincible. And even if I know she’s not, I want her to be. Because she’s my friend and cancer is fucking bullshit.

If you want to help, Alicia is going to have to travel to the States or possibly overseas for whatever clinical trial she can get into. This will take a lot of money for travel, lodging and other costs. You can read more on her blog and donate here.