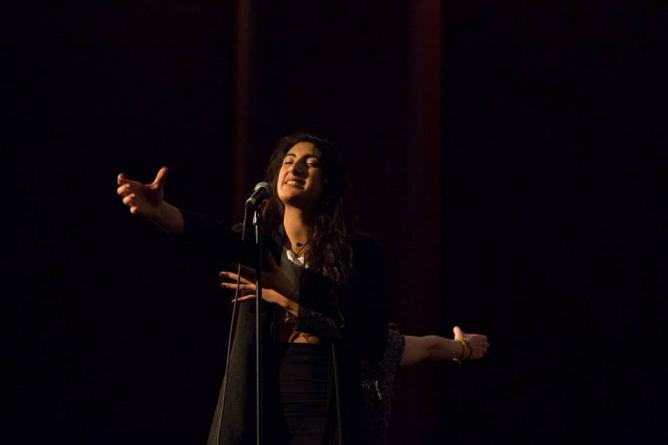 Where To Test Drive Your Written Work Aloud in Toronto

Writers rarely get to experience a “rock star moment” in their careers, but performing ones work onstage in front of a captive audience isn’t too far from one if you ask me. It’s a rush. It’s terrifying, exciting, and addictive. Doing it builds confidence in a major way – you’ll learn lots about your style, strengths and weaknesses, and you’ll grow from it.

If you’re a writer and want to push outside your comfort zone in 2017, get up on a stage and share your stuff. Here’s a roundup of events in the city where you can do it.

This spoken word event (featuring open mic poetry, comedy, storytelling, and more) showcases local talent that “DGAF about constraints and categories.” Hence, it has attracted a pretty chill following – rest assured you won’t be judged by a high-brow panel of critics here. Expect lots of laughs and lots of love. Check their Facebook page for upcoming events downtown.

This is Canada’s longest-running poetry-only weekly reading series, and it aims to be an entry point for new poets. Three poets perform their work in the cozy Free Times Café stage for twenty minutes, then ten poets read for three minutes in an open-mic portion of the night. Register for the open mic at least four days prior to the event. Check out the next one on January 10th at 8 PM.

For playwrights and screenwriters, Toronto Cold Reads provides a supportive community for testing out your work in front of a live audience. Submit an excerpt of your script and it could be one of the five or six selected to be performed live by an actor at the Sunday night event. Stay tuned on their site for the upcoming events happening in late February.

Do pals tell you you’ve got great stories? Pitch Raconteurs and see if you get accepted as one of the storytellers at their monthly reading series. All stories read here are personal, true, short (7–12 minutes), read live and recorded on the Raconteurs podcast. Send a 2–4 paragraph pitch with a brief summary of the story you want to tell. In the meantime, head to the next event at the Tranzac (292 Brunswick Ave), February 8th at 7:30 PM.

Anyone can slam at this twice-monthly spoken word poetry competition – just show up for 7:30 PM to sign up (but read this first). Judges from the audience score poems between 0 and 10 based on content and performance. Twelve poets read in the first round, then six will make it to the second, and then three poets battle it out for the win. The winner gets $80 and a pass to go to the semis round. The next slam is on February 11th at 8 PM and the Ted Rogers Doc Cinema.