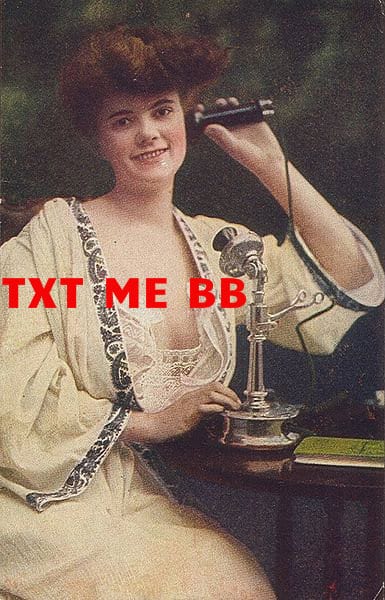 "We got off the phone, my pits were wet, my heart was racing, and I vowed never to do that again."
Life Stories

Why I’m Starting to Talk on the Phone More

"We got off the phone, my pits were wet, my heart was racing, and I vowed never to do that again."

I was settled on the couch one Saturday afternoon at my parents’ house, just chillin’ with a book, when the landline suddenly rang. I was so taken aback from this strange occurrence that I froze. It eventually stopped ringing somehow, some way, and then I got an earful from my mom for refusing to answer it.

“What’s wrong with you?” She asked me. “Just pick up the damn phone!”

In theory, picking up the phone and answering it seemed simple enough. But, in reality, it actually caused me a lot of anxiety. No one calls me anymore, and I have come to accept this. With the exception of my Mom, my chiropractor, and some guy who breathes heavily into the phone every once in a while, peeps just don’t ring. It’s gotten to the point where a friend of mine had asked if he could call me in order to test out his Google phone, and I freaked out (“You…you want to call me? What? Why?”).

Because I’m such a good friend, I eventually obliged him, but the experience was super weird. Even though we text/Gchat each other almost daily and meet up in-person frequently—a.k.a we be tight—our phone convo was filled with awkward moments and pauses as I scrambled to think of what I should say next (“So, uh, nice weather we’re having, eh?”). We got off the phone, my pits were wet, my heart was racing, and I vowed never to do that again.

It wasn’t always like this. I used to love talking on the phone. Back in high school, my friends and I would stay on the phone for hours until one of our parents demanded we hang up or we were interrupted by the annoying static sound that meant someone was attempting to use the dial-up Internet connection. The phone was my lifeline when I lived away from home as a twenty-something in New York. My friends from Toronto and I would talk endlessly into the night, catching each other up on the latest gossip, laughing at old jokes. Hearing their familiar voices and laughter made me feel much closer to them than the modern-day quick text exchange, “Sup?”

But I know I’m not the only one with phone phobia.

“I haven’t spoken to anyone in years over the phone. Except for my mom, and well, now, you,” Google Phone Friend told me when I asked him if he ever uses his smart phone for calling people.

“Phone calls are kinda annoying,” said another friend. “It’s, like, who do you think you are? You’re interrupting my day.”

I don’t have to be part of some think tank to know we can blame email, text, Twitter, Facebook, and every other hyper-connected, real-time so-called “social” media service we’re all plugged into for our resistance to voice-to-voice contact. Facebook comments now replace “let’s do lunch!” and tweets are the new way to catch up with what old friends/coworkers/exes are up to. Even when I worked in an office, phone calls were used for people who:
a) Didn’t understand my email.
b) Didn’t get an email from me.
c) Wrong number.

All this recent phone talk in my life made me realize how I much I miss someone’s actual voice; how much I miss having that one-on-one connection, and how much I don’t miss getting into fights with friends because I didn’t understand the intonation of their “I’m fine” text.
So, I decided to talk to people on the phone. At first, it was answering a telemarketer’s call just to get the feel of talking to someone again. (“No, I don’t want my windows washed, but how are you doing this morning?”) Then I actually called my esthetician to make my monthly waxing appointment instead of completing my usual online appointment form. Last weekend, I called up an old university friend. We ended up talking for over two hours, covering topics as diverse as men, movies and menopause; a range so large that it would have been surely impossible to discuss over WhatsApp without suffering from severe Carpal Tunnel Syndrome. The other week I decided that instead of throwing out a “Sup?” text, I would actually call my friend and ask her, “What’s up?” Now, I’m even so bold to dream of the day when I start dating a guy and he actually calls to ask me out rather than texts me an invite (that’s a big “ahem,” gentlemen). And when I was at my parents’ and their landline rang, I answered it (even though, yeah, it wasn’t for me).

It’s a work in progress, though. My go-tos are still texting, Facebook messaging and G-chatting, but I like where this new “calling people” experiment is going. I feel closer to friends, both near and far, and when I’m home alone, working on a computer, it’s sometimes nice to answer that 1-877-number just to remember that I’m not alone in the universe; that there are living and breathing people around, wanting and needing to connect in a more personal way than a Facebook poke and a smiley face.

But, not a lot, because those phone calls can be annoying. I mean, really, who do you think you are?