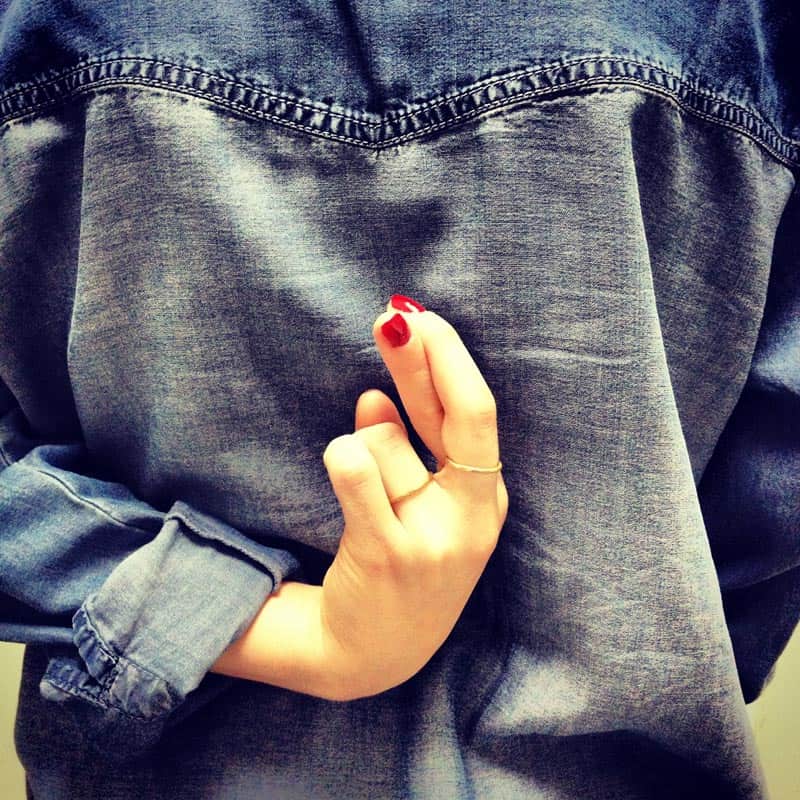 "The credit card companies have it down; you can pay now or pay later with interest. So ask, what did you get to learn about yourself?"

Why To… Be Honest In Love

It sounds obvious. It seems basic. It reads like a nagging little grandmother going, “tell the truth.” Why would someone be dishonest in a relationship? Well, be honest with yourself—you’ve done it. You’ve laughed hard at a joke that wasn’t funny, you stayed in a relationship a little too long, you’ve broken someone’s heart gently to spare yourself from a confession and you’ve agonized over an unsuccessful relationship that wasn’t worth a hot minute of your time. If not all of the above, maybe one of the above?

White lies do have their place. But in each stage of a relationship, honesty is paramount. If you want to lay a foundation of trust and respect, you need to throw some honesty in the cement mixer. There will be temptation to stray. There will be an easier way out. But it is a small world after all and at every turn, there is a pay off for keeping it real in matters of love. Oscar Wilde had The Importance of Being Earnest. Well, this girl is here to talk about the importance of being honest!

A relationship often starts with a power struggle of sorts. But even though you’re pulling off an impressive balancing act of come hither indifference, it’s important to stay true to your character. Dating is all about feeling someone out, trying them on and seeing if they work for you before you put a ring on it. Don’t mislead your audience. Take ownership of your history, it made you! You wouldn’t knowingly buy Archie’s jalopy just because it’s masquerading as a customized-to-you Batwomanmobile. And so, there’s no need for either of you to fog facts and be a salesman in your dating approach. Relax! If a connection isn’t there, on to the next one! The better-for-you one. There’s a much better chance of a happy ending if you’re being yourself a.k.a honest from the start.

So, you landed your lover! Official BF and GF status. Here’s the thing that everyone knows but doesn’t like to admit: relationships take some work. You have to check in and you have to grow together. Maybe when you met, you were both ragecases, but now one of you wants to start settling down. Talk about it. As much as we would love for our partners to be constantly attuned to our ever-changing wants and needs, that’s unrealistic. Be forthcoming with your feelings so you can move forward together, if that’s what you want. You also have to be honest with yourself! As you learn more about the person and the layers peel back, do you still want this relationship in a long term way? Are the red flags getting crowded? That’s another voice and it’s a tough one to hear when you are in the throes of passion. Give it a try. Evaluate the relationship and make sure it’s making you happy.

We’ve all been the dumper and the dumpee by now. So we know that as brutal as it is to be broken up with, it’s also hard to muster the strength and break really shitty news to the person you care(d) about. But “It’s not you, it’s me”… who exactly does this help? Yes, the truth hurts. But as much as you might think you are doing your partner a solid by sparing them the facts, you actually may be doing them a disservice. Speak the truth and in turn, let them have a fighting chance at growing and coming to terms with this break up. It doesn’t have to be a gutless explanation or even that detailed: just enough to ease their mind away from over-analysis. If you desire a friendship/civility one day, have some respect and you will receive it back in due time. And if you did them wrong, be the person that they hear it from. I’ve found that the truth really does come out no matter how hard one might try to conceal it. So why go there and end up the bad guy who tried too hard to save face? People respect honesty. They can’t argue with honesty. Give the gift of closure. Be kind but be honest.

If there is ever a time to look at life’s big picture, it is now. Post-relationship, turn the honesty mirror on yourself. In my humble opinion, the best way to get over a relationship is to stare it in the face. Get to know it all over again from the perspective of a new, clearer lens and accept the amour for exactly what it was. It may take time but you will find your moral to the story, which can help to ease all kinds of pain. If you don’t allow yourself to have an honest look back, not only are you missing a unique learning opportunity but you are prolonging the inevitable tidal wave of emotions. The credit card companies have it down; you can pay now or pay later with interest. So ask, what did you get to learn about yourself? Do you miss them, or the idea of being in a relationship? What would you do differently the next time a charming thang comes around? The residual feelings will melt away as you start the next phase with newfound knowledge and a silver lining to boot.

There’s a reason why they say that honesty isn’t the best policy, it’s the only policy. Frankly, do the alternatives sound that wonderful? Of course, we’ve never had more chances to hide ourselves, be it through technology or maybe just by getting lost in a big city; acting a part we think we should play. Everyone likes to play dress up once in a while! (Okay, as much a possible, whatever.) But there’s a time and place. And when you step into a relationship—and let your actions have a hefty impact on another being—that’s not game time. Treat yourself with the same care! Keep in touch and don’t be afraid to call yourself out from time to time. You can keep your fingers crossed that the same respect will bounce back in your direction. Honesty is virtue. Let’s put it into practice!