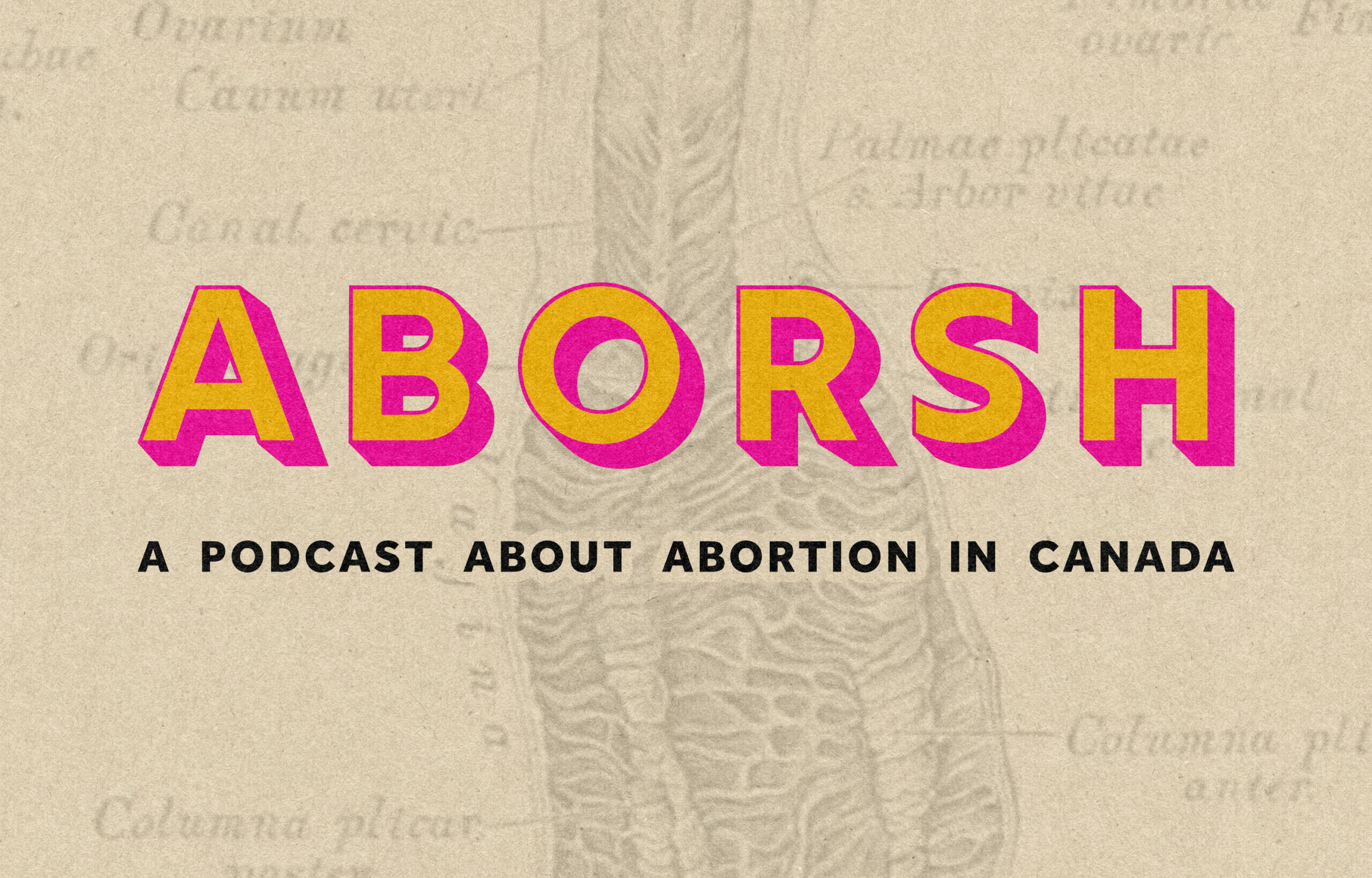 "The absence of abortion stories perpetuates the stigma that cloaks abortion in silence and secrecy and allows the people who don’t normally think about it to do just that."
Health & Wellness  Life Stories

To be honest, I’d never really thought all that much about abortion other than… yeah duh I’m pro-choice. I’d also never had a pregnancy scare. And because I was in a very happily committed relationship with my IUD, I kinda (wrongly) assumed it wasn’t something I’d have to worry about. Until… it was.

The first thing you’ll hear when you tune into Aborsh, a podcast about abortion in Canada, is a recreated conversation I had with the doctor I first saw to figure out how do I get an abortion?

The doctor countered my question with a string of his own. He asked about my relationship status, how much money I made, and why I didn’t want a baby. Instead of asking the doctor how much money he made, I just answered all of his questions in an attempt to be a “good patient” and hopefully get an answer to my initial question how do I get an abortion?

One circumstantial complication was the fact that I was flying from Toronto to Vancouver the next day for Christmas to spend the holidays with my family. I was going for a month. Because of this — and after he assured me that my partner and I made enough money to care for a child — the doctor advised me to go to a walk-in clinic once I got to BC.

I was pretty sure this wasn’t the best he could do for me. And although he was tipping his hand as to what choice he thought I should make, I don’t think this was an encounter with conscientious objection — the legal loophole doctors can use to refuse to provide care that opposes their moral beliefs. I think this doctor was making an economic decision. He was only getting paid for this office visit. My abortion was going to happen in BC. He wouldn’t be able to bill for that. And so, like many Canadians seeking abortions, I was on my own.

My mom helped me figure out where to get an abortion. She called the clinics that serve Vancouver and figured out which one could see me before Christmas. The earliest appointment was in ten days which, if you’ve ever experienced first-trimester fatigue, nausea and vomiting, feels like an eternity. But these 4 clinics that serve the lower mainland of Vancouver provide reproductive healthcare for a population of nearly 3 million people. I was lucky one could squeeze me in.

In the days leading up to my clinic appointment, I learned about my mom’s abortions for the first time. Her’s were nearly 50 years ago, in the 1970s, before abortion was decriminalized in 1988, the year I was born. The first one was illegal. For the second, she had to threaten suicide so that three male doctors would approve the procedure. The stark differences between hers and my experience, a mere generation apart, astonished me. Undeniably, I am the beneficiary of enormous progress. But there is still so much further to go.

I think back to my pre-abortion self who never gave that much thought to my reproductive rights. But why would she? Usually, we don’t hear about abortion unless it’s under attack. I’ve been researching reproductive rights for the past two years for this podcast, and it feels like abortion only entered our public discourse a few weeks ago when it was confirmed that the US Supreme Court has some seriously messed-up nostalgia for the 18th century.

We rarely hear about abortion because it’s a super common reproductive event that happens 73 million times a year around the world, and that 1 in 3 people with uteruses will experience in their lifetime. I would like to see more abortion coverage that includes people’s stories so that there’s more attention paid to the social context of reproductive decisions than to their opposition. Even rarer are happy stories about people’s relief and confidence in their choice. Like me.

So, that’s why, when I set out to create a podcast about abortion in Canada, I sought experts and activists who are progressing reproductive justice and choice. Throughout the eight episodes of the first season of Aborsh, you’ll hear from some of the leading national human rights organizations, a political science professor, the co-chair of the National Aboriginal Council of Midwives, an OB-GYN abortion provider, and even my mom. We tackle a range of topics like the state of training for healthcare providers, the reasoning for a proactive right to abortion, the resurgence of Indigenous midwifery, and the link between access to reproductive health care services and economic growth, security, and well-being.

When we only talk about abortion in relation to its opposition, we reinforce a conflict that has already been resolved in Canada. We have no law restricting abortion and the majority of Canadians support reproductive rights. And the absence of abortion stories perpetuates the stigma that cloaks abortion in silence and secrecy and allows the people who don’t normally think about it to do just that. Because people make reproductive decisions for reasons that we can all relate to. Everything from affordable housing, child and eldercare, to education and career trajectories, to our relationships, our life experience, and our health.

Reproductive freedom is the foundation of a healthy society and it is intrinsic to our equality, autonomy, and the most important decisions one makes in life.  Reproductive rights benefit all of us, and they are our collective responsibility. So, more abortion stories, please.

Rachel Cairns is a Toronto-based actor and writer who cut her teeth as a creator making short films and web series that have screened at festivals internationally, garnered nominations and awards, and have been viewed millions of times on YouTube.

She is also the creator and host of Aborsh, a new podcast about abortion and reproductive freedom in Canada, incorporating storytelling with interviews, research, and cultural commentary. Listen to the first episode on June 13th.

"The absence of abortion stories perpetuates the stigma that cloaks abortion in silence and secrecy and allows the people who don’t normally think about it to do just that."

“We can’t get complacent”: ‘Looking For Jane’ is a page-turner with an agenda

‘Saint Frances’ tackles abortion and the pressures faced by thirty-something, child-free women with honesty and humour