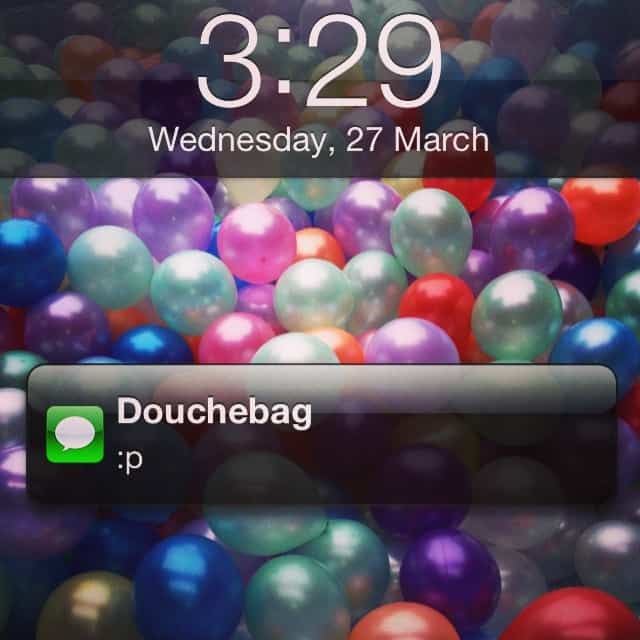 Why You Shouldn’t Text Them Back

We know these people. The ex-boyfriends, the dudes who can’t take a hint, the takens, the dates whose once-interesting qualities have run their course. For whatever reason, they are reaching out. And for whatever reason, be it timing, the person, or simply what is being said, the guidelines for your next move are hazy. Depending on you, it may take a lot to fend off the urges to fight/flirt/talk back. But there are a lot of signals out there that can help clarify whether your textual relationship is worth continuing. So before you answer to that little blip on your oh-so-accessible cell phone screen, let’s think about it. Because sometimes, instead of crafting, drafting, and prolonging the saga, the best thing you can say is nothing at all. Here are some possible reasons to not text him back.

He has a girlfriend

….And he’s not chatting to you like you’re just a friend. If you want a future with this boy, don’t start it like this. Sure, there are couples who can get past a rocky start that is littered with broken hearts—but do we want to turn a marathon into an obstacle course, too? Even if you were to come out the “winner,” it can’t be too affirming to see your man’s willingness to risk and axe his once-cherished relationship. Maybe cut this one off and force him to actually move mountains to be with you. Or maybe just move on to a guy who is secure enough to be content with one awesome girl’s attention or to stand being single for a little while. Bottom line is that if he’s being inappropriate in his current relationship, chances are that the pattern will only continue, even with you. And if you don’t want anything romantical with him, why engage his creeping? It’s called a Friend Zone. Put him in it!

You have a boyfriend

Fair is fair, correct? So don’t play with this kind of fire. Yes, it may feel a little exhilarating talking to someone you perhaps shouldn’t, like a desirable little vixen. But if you find yourself engaging in some questionable textual behaviour, take a step back. Look at your relationship. Test it and ask yourself, if for some reason your BF went through your phone (and I truly believe there is no good reason for going through someone’s phone, other than to order food), would they be okay with what they found? If yes, then continue your male-female friendship! If no, is there a chance that something is missing in your relationship and it’s causing you to look elsewhere? You can take your answer and then decide: Should you stay and actively try to work on this? Or do you cut both of your losses and go with what you actions are telling you? Part of any recovery is recognizing that there is a problem. So once you’ve acknowledged it, do something!

It takes zero balls to text someone late, late at night. So whether someone is trying to have the last word or lure you to come over, it’s not cute. Don’t feed into it. Don’t read into it. If someone actually means what they are saying, they’ll usually wait to drop a line at a moment when they know you are lucid. Where are the cahones at? And that goes for you too, missy. Instead of being the girl who takes what she can get when she can get it, be the girl who gets what she wants. If a booty call is what you’re actually after, by all means, answer that text. But if you want a better chance at progressing your connection into relationship territory (especially true at the early stages), wait on it and put that phone on silent when you’re off to bed. Right now, set the standards high! Don’t stunt what could be. You already have your opening: they texted you! No harm in getting back to them in the morning when you have a chance at a real conversation.

You’re better than that

Your time is precious. Social media can barely scratch the surface of just how much goodness happens to you on a daily basis. If you’re not interested in someone romantically, professionally, or otherwise, you don’t have to use time or thought that would be better spent elsewhere. You’re more efficient than that. No chumps here! Yes, sometimes it can be nice to have someone who asks about your day. But that can breed false hope and you’re also missing out on how incredible it feels to do things purely for you. Instead of wasting yourself on people who are not making you genuinely excited, open up to newness!

…Or first, lay it out

Ok, so there’s a loophole in every rule. Provided you have not actually expressed your wishes to end communication with this person already, feel free to say so. You don’t always owe an explanation but there’s nothing wrong with calling it like it is—once. Let’s not make this a weekly thing; dragging it out is fun times for no one. Be straightforward. If you’re going to cut someone off, say your piece and mean it. And if you just want to lay down the law but continue a different kind of relationship, hold yourselves to it. Regardless of the follow through and outcome, now you have the option to walk away/stop texting with certainty. You made yourself heard and you tried. Once is enough.

It’s your choice! Do what you gotta do. Sometimes people need to be let down gently and other times, cold turkey is the only way to go. At the end of the day, the company you keep says a lot about you, both virtual and otherwise. Keep it sacred. It’s up to you to live the good life, free of unnecessary drama and emoticons that make no sense. Spring time is here (kind of) and its time to clean out that closet! Getting there may seem chock full of harsh calls and cuts. But one day, you’ll realize that those jeans never looked good on you anyways and clearing the space has only freed you up for bigger and better things.