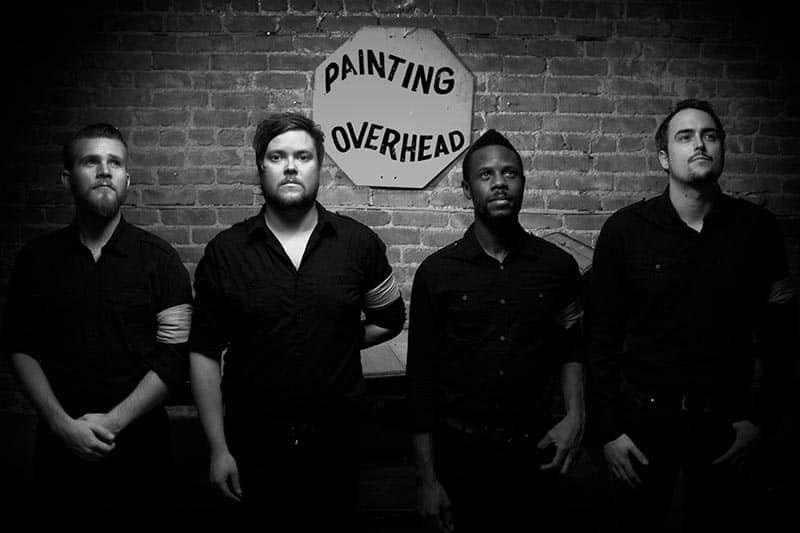 Wildlife’s Dean Povinsky talks to us about SXSW, pre-show rituals, and what it means to be a Southern Ontario kid

Wildlife are four friends from Ontario –  Dean Povinsky, Graham Plant, Dwayne Christie, and Derek Bosomworth –  that came together in the name of music back in 2006. Their sound is rock ‘n’ roll, but it’s the kind of rock that makes you feel something; evidence that the band puts everything they have into each song.

It’s been a busy month for Wildlife having released their new album …On The Heart and being a part of the SXSW music festival in Austin, and things don’t appear to be slowing down for the band any time soon. Currently in town for Canadian Music Week, I sat down with lead singer and guitarist Dean Povinsky at Bloorcourt coffee shop The Common to discuss all things Wildlife-related.

SDTC: You guys played SXSW very recently –  what was that experience like?
Dean: It was lots of fun. We’d never been down before so it was our first time. It was hot… the shows went well, the people were really nice. It was really hectic; it’s crazy down there.

You also released your sophomore album earlier this month. How does this one differ from your debut in terms of approach and style?

We worked with different people making this record – the last one was sort of done ourselves with our friend Mike. We did a lot of [this record] in the States with Peter Katis and Gus Van Gogh and so we had more at our disposal in terms of sound. It’s sort of an extension of our last record; our last had a very loose concept, everything was supposed to follow a certain arch and this one’s sort of the same. It’s a progression of the themes we dealt with the last time.

What’s your experience with Canadian Music Week been like?

Any of those things where it’s just five or six bands and you go, don’t really soundcheck and you play and you get off – it’s all very cut and dry. It’s more fun to do your own thing but we’ve had some good opportunities doing it.

Does it have to be five? My stock answer is always romantic and violent. A-combination-of-romantic-violence.

What is your earliest musical memory?

My mom playing the Fraggle Rock theme song on piano and me doing somersaults on the living room floor.

Who inspires you musically?

My parents do; they definitely inspired me when I was young to do stuff. I think a lot of the same people that a lot of people would say in terms of rock ‘n’ roll – Stars, Bruce Springsteen, and Joe Strummer. I’m a really big fan of Dan Beckner from Wolf Parade and Handsome Furs; I wanted to see his new band down at SXSW but didn’t get to. Robyn I like a lot.

How did Wildlife come to be?

I was in Glasgow doing music stuff in the first version of this band and my friend and I decided we weren’t going to stay; he was going to move to Halifax and I was moving to Toronto. I talked to my friend Graham on the phone and he was about to move in with Dwayne and I said “I’m coming home, I’ve got all this stuff I want to keep working on” and that was when we decided to do it. Then we found Derek, our bass player, on Craigslist and that’s kind of it.

What influence has growing up in Southern Ontario had on your music?

My experience growing up in Southern Ontario has been pretty positive and so being positive is a big influence on it. Not being afraid to be silly and be dumb is a thing that I think a lot of Ontario kids have. They have a lot of freedom.

How does the writing and composing process work with their being several members?

It started out differently than it is now. At the start, it was all of these songs that I had and a lot of things were set and dry, and we sort of just learned them and recorded them. Over time, it’s definitely grown into more of a group participation. Most of the time, I have a song idea and some main parts, and I bring it to the band and we start jamming on it. Then we all just sort of butt heads until it becomes the thing that it is.

We’ve got uniforms that we always wear –  so it’s like the putting on your uniform, doing stretches, tying up each other’s armbands, doing a couple shots maybe. Doing a bastardized version of “Clear Eyes, Full Hearts” [from] Friday Night Lights, the show. We do some stupid version of it, it’s like, “clear eyes, full hearts, get loose” or something like that.

How has the band evolved and grown from the time you formed to now?

We started out doing things a certain way and then one day we decided that we were going to try and do everything democratically. That was a really good shift in the band because it sort of centralized everyone’s vested interest in the band. Also, always trying to be conscious of our levels of communication has avoided us having to go to therapy. Trying to be really open with each other; you can fight about things and learn that the other person doesn’t hate you, they’re just trying to express themselves. Stuff can get pent up over months and months and months and then get explosive so we try and deal with things as they come now.

What are your favourite spots in Toronto?

This spot’s good; I like The Common. There’s a taco place I went pretty recently that was amazing called Playa Cabana. I go to The Ossington a lot… I go there for trivia called Brass Facts that my friends do and I usually end up there at some point during the week.

We just put our record out and we’re doing a lot of prepartion to get that moving; a lot behind-the-scenes things for the last couple of months. We’re going to be doing a tour across Canada in late-May, early-June and then that will sort of dictate the way the rest of the year goes. I’d like to go to Europe in the Fall so that’s a possibility for us.

(Check out Wildlife’s music video for “Born To Ruin” from their new album …On The Heart and their Facebook page for band stuff.)