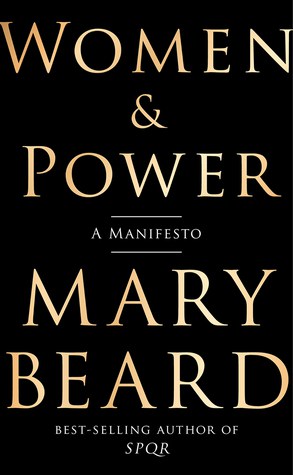 Mary Beard’s Women & Power: A Manifesto is brief but revealing. It is a deep dive into ancient history to mine the origins of modern-day misogyny and mansplaining. Because the jacket sleeve denotes this book was written to address the attacks of “trolls,” I assumed I was in for a lengthy rant about Twitter. I was mistaken.

Instead, the book examines the pillar that underlies nearly all of our major institutions of power – speech. Beard traces back to the first recorded instance of a woman being told to shut up; it was at the start of Homer’s Odyssey, written almost three thousand years ago. Penelope, a savvy, middle-aged woman comes out of her private quarters to find a bard performing, droning on at length about “the difficulties the Greek heroes are having in reaching home.” She’s not thrilled with his killing the mood and tells him to perform something a bit more upbeat. Then her young son Telemachus pipes up and says, “Mother, go back into your quarters and take up your own work, the loom and the distaff…speech will be the business of men, all men, and of me most of all, for mine is the power in this household.” She turns and vanishes back upstairs.

It sets the tone for what has reverberated throughout western history: the business of speech is men’s business, and women who dare to speak in the men’s sphere (i.e., anywhere in public) do so at their own peril. Beard recounts instance after instance of women being silenced through verbal commands, or real physical violence – for example in Shakespeare’s Titus Andronicus, when Lavinia’s tongue is casually ripped out after she is raped.

Beard, who is a professor of Classics at the University of Cambridge, recalls some of the hostile tweets she’s received (“I’m going to cut off your head and rape it” is one of them). She notes how they pour in after every time she speaks on radio or television. As a woman, “it is not what you say that prompts it” she writes, “it’s simply the fact that you’re saying it.”

But what of those women who have managed to ascend the ranks of male power? Beard points to the necessity of “aping” male forms of conduct and speech in order to be impactful. Margaret Thatcher famously took voice lessons to lower the timbre of her voice. Hillary Clinton and Angela Merkel are staunch adopters of the “power suit,” giving them a more masculine silhouette with which to hold court.

At the heart of this manifesto, Beard challenges power itself in its current state of being correlated with public prestige. “You cannot easily fit women into a structure that is already coded as male; you have to change the structure. That means thinking about power differently. It means decoupling it from public prestige. It means thinking collaboratively, about the power of followers, not just of leaders. What I have in mind is the ability to be effective, to make a difference in this world, and the right to be taken seriously.”

What this slight tome unfortunately does not get into is how exactly we are to achieve this tectonic shift. And power as it currently exists, even with all of its problems, is still something many women desire. Women & Power left me with the stinger: if a man were to have written this book, it would be heard as a call to arms. But as history has shown, a woman with a point to make is quickly muted.