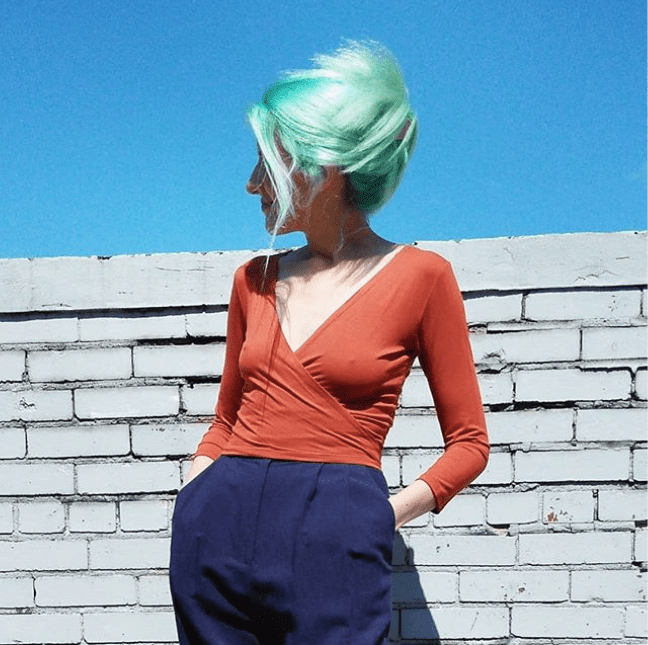 Womxn & Alcohol: When Designer Hayley Gibson stopped drinking, she learned to lean into her pain

Hayley Gibson has been sober since 2004, which is years before society openly talked about addiction, recovery, or how alcohol-use disorder specifically effects womxn.

The designer of the beloved fashion label Birds of North America, a Canadian-made line of women’s clothing based in Toronto, didn’t know anything about AA when she first walked into the rooms. She only knew that her drinking was a huge problem, and wouldn’t stop unless she took steps to drastically change her lifestyle.

That was sixteen years ago, and Hayley hasn’t had a drink since.

For those newly sober, inching their way through each hour, Hayley’s longterm recovery may seem as far off, or as likely, as taking a vacation on the moon. But she started like all of us do—one day at a time.

I didn’t know anyone who was ‘out’ as an alcoholic at the time, and it didn’t even occur to me to talk to a doctor about it or to seek therapy. The only thing I could think of doing when I decided I needed help was to contact AA. I knew nothing about it, aside from the fact that it existed, but they were incredibly helpful and welcoming. The meetings gave me a place to go and the support I needed for the first year and half of my sobriety while I created a new life and developed other support systems.

The real reason I stopped drinking, though, was because I decided that I had had enough. I don’t think any form of support or therapy really works until a person is ready to stop. That moment came for me one morning when I woke up on the floor of my apartment after a particularly out-of-control night. I had been managing to somewhat regulate my drinking for the previous several weeks, and had deluded myself, as I had countless times before, into thinking I had it under control. I felt like the previous night had blindsided me, and for some reason, on this particular morning, I saw clearly for the first time that this was going to be an endless cycle, stretching out in front of me for the next 10, 20, 30 years. I didn’t know what the alternative to drinking was at this point. I didn’t know what was going to come next, I just knew that I didn’t want this any more.

I have a very different life now than the one I had when I was drinking. I put almost all my energy into my work, and I try to enjoy simple activities like reading, writing and walking when I have spare time.

Self-care and communication are crucial. To me, that means maintaining a healthy lifestyle and making sure I communicate what I feel so things don’t fester inside of me. Not being able to communicate my feelings has been an enormous challenge my whole life, and learning how to do so consistently and appropriately has been transformative.

My partner and I walk wherever we can, try to get out enough during the long winter, eat healthily and get enough sleep. This all sounds unbearably boring, but it creates a stable backdrop for me to be able to do exciting, creative, meaningful work in my day to day life, and that’s truly what I live for.

It’s hard to explain, but when I used to drink, I lived mostly in my head. I would imagine all the things I wanted to do and make elaborate plans, but never actually managed to make or do anything concrete in the real world. The alcohol fuelled a delusion that ‘thinking’ of doing something was the same as doing it, and the result was not ever really being able to act meaningfully on any ideas or dreams that I had. Now when I have an idea, I’m able to make it happen. There’s something to show for the time that is passing. I’m living in my real life, not just imagining it.

When I stopped drinking it immediately helped alleviate certain problems for me, like crippling hangovers, insomnia, binge eating, constant feelings of shame and regret, as well as some of my more dangerous self-harming behaviours.

Early on, however, it also became clear that stopping drinking hadn’t solved all of my problems. Some of my negative self-harming behaviours continued into my sobriety, which forced me to confront the fact that, as much as my alcohol abuse was a gargantuan problem in itself, it was fundamentally a symptom of larger issues. Seeking help for these underlying issues has been the main thing that has kept me healthy and sober for the last 15 years.

One of the more recent post-drinking revelations I’ve had about myself is that I’m hyper sensitive to just about everything. I think this is probably not uncommon in those prone to addiction. I was always a shy, sensitive kid, and I feel like alcohol bulldozed that aspect of my personality.

I’m sensitive to sound, and work best in silence. I actually try to avoid listening to intense music when possible because it can trigger an almost manic emotional response in me.

I’m hyper sensitive to people, in general, as well. I have deep empathy, which can be a beautiful thing, but I have to be careful not to get over-involved in others’ problems in an effort to try to help them. I love interacting with people, but it drains me very quickly. I prefer intimate, intense relationships with people I know well.

I’ve basically discovered that I’m a major introvert, and that I have to be protective of my time and energy in order to stay healthy.

I’m rarely asked why I don’t drink these days. I think it’s because the life I’ve built doesn’t include many situations where drinking or not drinking would be an issue. Having said that, alcohol is so ubiquitous in our society, it does end up coming up from time to time.

If someone does ask, how I answer depends on who it is. If it’s someone who I trust and feel is discreet and sincere, I’ll tell them I’m an alcoholic and that I stopped drinking fifteen years ago. If it’s someone I don’t know, or someone who I feel is being inappropriately invasive, I’ll more likely say that I stopped drinking a long time ago because it just ‘wasn’t working for me’. That usually ends the conversation!

It’s very different from what it used to be, thankfully! I used to revel in manic, often risky, types of ‘fun’ and was constantly trying to escalate any situation I was involved in. In retrospect, I feel like I was trying to perform the idea of what I thought fun was supposed to be, while not actually feeling the fun.

These days I delight in intimacy with the very few people I feel close to. I enjoy quiet things – creative work, reading and writing. I gain enormous satisfaction out of running my business – the challenge, creativity and intensity of it. Strangely, life now is no less intense than it was when I was partying hard in my early 20’s, it’s just more authentic, and more productive.

I would say that you just have to try to get up every day, find ways to allow yourself to experience the pain you’re feeling so you can dissect it bit by bit and eventually master it, and try to hold onto the small sparks of joy that will ignite in your life if you can give yourself the time to heal without this crutch.

It’s hard in the early days because there isn’t a prize when you stop drinking. The truth is that quitting a substance you’re physically and emotionally addicted to often leaves you even more vulnerable at first because you don’t have that thing to hide behind and numb yourself with any more. Issues like binge eating, self-harming behaviour, and anxiety can worsen, making it difficult to feel like you’re on the right track. Recovery is so difficult because there’s really not much anyone can do to help you through it. Just know that it’s going to be hard, and that you have to lean in to the pain, because that’s where you’ll find the answers, and eventually the light.

The idea that alcoholism is some kind of inherent, fatal flaw in a person needs to be dismantled. I believe that alcohol abuse, like all addictions, is a symptom of larger emotional problems more than a lone-standing issue in itself. It’s one of many symptoms a complex human experiences in the process of trying to alleviate their pain.

It has given me my life. I’m constantly aware that I wouldn’t have any of the incredible things I have, like my partner and my work, if I was still drinking.

It has given me my authentic self for the first time. The feeling that I’m actually in my life. Present. Whether I like where my life goes or not, I know that alcohol isn’t steering the ship. It’s all me, for better or for worse.

In our ongoing Womxn + Alcohol series, we are interviewing dozens of Canadians who stopped drinking to improve their mental health. In sharing a diverse range of stories, we hope to shed light on how very broad the alcohol-use disorder spectrum is. Find out more here.