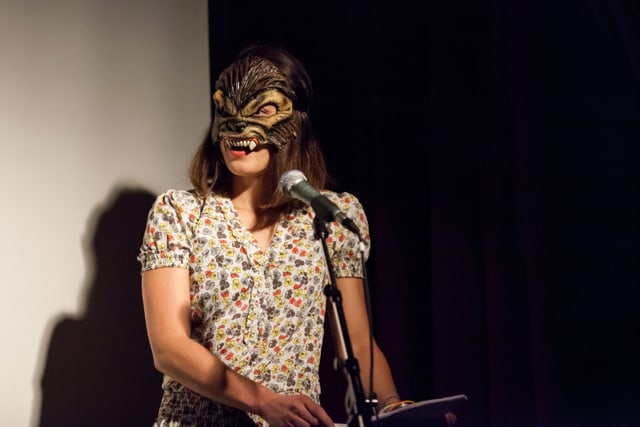 ‘There is zero magic to being a writer’: Author Jowita Bydlowska on working and mental health

I used to cry at my desk at work when I worked inside a cubicle, in an office. I don’t understand that person now and don’t know what her problem was.

There was nothing wrong with the cubicle, my cubicle neighbour was a nice, very connected hipster (“I’m friends with the owner”) with lots of stories worthy of VICE magazine that I could live through vicariously—having no longer partied myself (motherhood and sobriety).  My other co-workers were also cool, quiet and smart. Everyone seemed to be on the introverted side but always happy to talk about cats—it was not mandatory but somehow everyone owned a cat—and celebrating each other’s birthdays with a group lunch, grocery-store cake and funny cat-themed cards. Overall it was a fine place to do my 9-to-5 grind at.

I have no idea why I cried—maybe because there were sometimes too many pointless meetings, because we had no windows (or daylight), maybe because there was nowhere to really grow within the company, or because my artistic ambitions were being stifled—whatever they were back then. I cried quietly. Nobody saw. I thought I needed more freedom; I thought I could accomplish more if on my own, without a boss and rigid structure.

The magazine died in 2014, and I, along with some of my co-workers, went on to work from home. People were obviously distraught with the sudden news, but for me it meant moving into the exciting world of freelance. I didn’t want to be in a cubicle and then suddenly I got my wish! I could be as artsy as I wanted to—in fact, I quickly applied for a grant to write a novel, and I started to work on that. At the same time, I quickly found out that those dreaded work meetings and no-windows were nothing compared to the stress of being my own boss and having all the time in the world.

Without a schedule, or any sense of routine, the freedom felt both expansive and intoxicating turned out to be a paradox. Suddenly, I was paralyzed by freelance life, so I stayed at my desk for as long as I physically could.  This in turn made me truly depressed but now I didn’t even dare to cry over it as I got my wish of full autonomy.

I felt guilty over not having to schlepp across the city on the dreaded public transit to sit in that cubicle I hated, I felt guilty over having windows, even over getting that grant to write about stuff that didn’t exist that was nowhere close to the meaningful articles I used to put out at my office job.

Fast-forward six years, one novel out, one novel to be published next year, and the weirdest habits later, and here I am ready to give you some great advice on how to handle working from home now that you, like every self-respecting writer, are also probably stuck there, thanks to COVID-19.

First of all, make sure you always get those 20 minutes of meditation in, first thing on waking at 6 am, followed by an hour-plus of vigorous cardio (I recommend running—best done before everyone else is awake), followed by an hour to two of writing about your feelings to warm up for the day, followed by a healthy, gluten-free breakfast. Go for a hike by the water. Pet a kitten. Pet your Zen garden. Then sit down and write your first real pages—your novel or memoir or a book of essays. After lunch—spinach—call your agent to talk about the movie script you’re working on, followed by another 20 minutes of meditation, followed by 20 minutes of breathing and manifestation exercises (of your book becoming a bestseller), and so on, and so forth—keep going till about 6 pm, which is when you can get up from your desk and walk straight into traffic.

Just kidding. Do none of that—or only do it if it’ll make you sane.

It really can be hard staying sane, especially when left to our own devices. After two years of working full-time as a writer, from home, I had experienced some serious setbacks that right now I can only identify as mental breakdowns. Year three was the year where I started sleeping from stress—it was the oddest thing to feel my mind and my body shut down in the most fight-or-flight situations (like during my separation proceedings). Three-hour “naps” became the norm, I invested in earplugs and satin sheets and became the queen of doing nothing much. Then I had another year where I published more than 20 short stories, a novel and a bunch of personal essays.

Last year, I published three short stories, and broke my body in a bike accident—not related to writing—and this year I’ve nothing scheduled so far. This year, so far, I am exhausted already and feeling this low-grade depression that mostly just makes me not want to call people, and watch all of Are You the One? Which is what I might do for a while. I know better than to push it. Lesson number One is: give yourself a break.

Listen. The days hardly ever go as planned. I’ve meditated maybe three times in the last six years, went running exactly four times, never had a gluten-free breakfast, moved close to the water but rarely walked by it and some days I can only manifest getting in a shower and going for a slow stroll around the block. It’s a good day if I get a solid hour of writing done, and most of the time is spent just as you spend your day—on meetings and answering emails and doing all the stuff you do before you do the stuff you want to actually do.

There is zero magic to being a writer (I do not need a special tea, desk, cabin, or a Corgi to write). After six years of really trying to come up with a structure and a routine, I have very few wisdoms. After giving yourself a break about it all, the biggest thing is to be realistic about what can be done in a day—two pages of writing is probably a lot more realistic than 10, answering all the emails and following up with all the people might have to happen over a week instead of trying to cram it all into a day. If I can’t do a walk, I spend 30 minutes on my stationary bike, which is also a good time for me to read over—and make small edits to whatever I wrote that day. If it sounds like a small life that’s because it is but there’s a lot more balance to it than trying to force some improbable goals. I’m fine with doing just enough.

The third thing is being able to break your day somehow and, fourth, to know when to finish it. As I’m sure you’ve found out during lockdown, not leaving for your office also means that some people think you never actually leave the office. Year One of my freedom, I was enthusiastic about being able to work round the clock (I can write so much more! I can write two books at once! I can write till 2 am! I don’t even know what I’m doing!), but by letting that happen I had zero downtime and as a result was exhausted, resentful and eventually a lot less accomplished than if I got in some quality work time in and took a proper break.

A friend who’s a writer takes a 20-minute nap every day after lunch. Another friend turns off screens and reads a paper (!) book on something not at all related to whatever he’s writing (it’s like a literary amuse bouche, a cleansing of a palate).

I myself eat, listen to music, read or doodle. I don’t let whatever my break is about pull me away from my work for too long but I make sure I change my surroundings and circumstances even for a short time to avoid that cubicle feeling of being stuck in one place. I also try not to socialize with my partner till the end of the day although we’ve played hooky before and it was just as fun as it was back in the day when I would call in sick to do the same. But I don’t abuse it (too much) now that both me and my partner work from home, and the only thing that I do let interrupt my workday is my son’s homeschooling, which is something I think most Canadian households are trying to figure out right now during the pandemic.

What you’ve been experiencing, and what I’ve been at for a little longer due to my dream job working from home, is a shitshow and although I’m not suggesting slacking off, I’m here to tell you that planning is sometimes just another way to make yourself crazy and sad. And you never want to feel as crazy and sad as I did when sleep seemed like the only way I could do to cope with feeling overwhelmed. Maybe cubicles are a thing of the past for most of us now and we all feel sentimental about the grocery-store birthday cakes sliding off those flimsy Styrofoam plates but maybe this is all temporary. All I want to say is that while we’re here is that planning small—just getting one thing done—giving yourself a break, and being realistic is what prevents dreams from turning into a nightmare and regretting getting exactly what you’ve wished for.

Jowita is the author of Drunk Mom, Guy, and her new novel POSSESSED releases in spring 2022 with Dundurn Press.