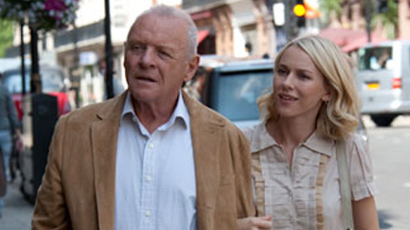 You Will Meet A Tall, Dark Stranger, Directed by Woody Allen

Life is complicated. Helena’s (Gemma Jones) husband Alfie (Anthony Hopkins) has left her, because he refuses to grow old. As such, she’s badgered her daughter Sally(Naomi Watts) into sending her to a fake psychic, just so she’ll stop coming ’round so often for sherry and putting more pressure on her strained marriage to Roy (Josh Brolin), a writer who has been toiling for years to follow up his first, “promising” novel. Soon, inspiration strikes-for Roy, in the form of Dia (Frieda Pinto), a beautiful musician in the apartment across the way, and for Sally in the form of a new job at a gallery and a sexy new boss (Antonio Banderas). While her parents hurtle down very different paths of destruction (Helena’s spiritual, Alfie’s blond), Sally and Roy watch their marriage crumble around them. A winning tale of intersecting lives, passions, and destructive decisions, this film feels like a well-styled slice of true life.