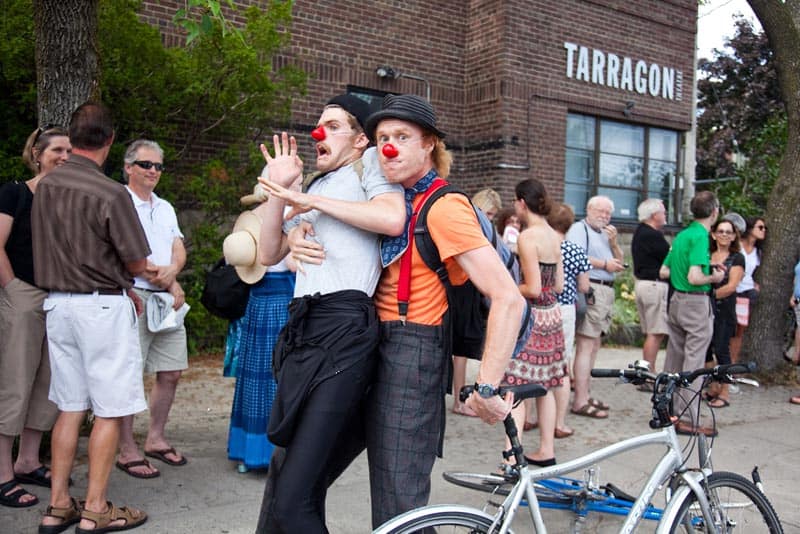 You like theatre? We got your theatre! Here are some awesome theatre festivals that are coming up this summer around Toronto:

rock.paper.sistahz festival: May 24 to 31 at Artscape Wychwood Barns

b.current has been hosting the annual rock.paper.sistahz festival since 2002.The event concentrates on presenting performance work by black female artists and artists of colour. “Taking its name and form from the well-known hand game, the festival is always dynamic, fast-paced, and surprising as we strive to develop and present fresh material, performance styles, and ideas seldom seen in professional contemporary spaces; while also focusing on themes, forms, and styles which have grown out of the black diasporic culture.”

InspiraTO 10 Minute Play Festival: May 30 to June 8 at Alumnae Theatre

Canada’s largest 10-minute play festival, the InspiraTO Theatre Festival, offers an innovative approach to the 10-minute play format. The festival is made up of four distinct shows, with six 10-minute plays in each show—and each show addresses a creative challenge. This year, for the first time in its history, the InspiraTO Festival will also feature the White Show: a “safari” approach where audiences will be led to four site-specific venues and see a 10-minute play at each one.

Toronto Fringe Festival: July 3 to 14 at various venues in the Annex

This year marks the Toronto Fringe Festival’s 25th anniversary! The festival features 148 shows in 35 venues, in every genre featuring artists from all over the world. It promises “new plays and old favourites, experimental works and fresh hits… eight dance productions and FringeKids! Shows… a Site-Specific Art Category, with 20 shows in venues such as a pawn shop, a laundromat, a storage unit, and the Campbell House Museum.”They also have a slew of free activities and, of course, everyone’s post-show favourite: beer tents!

SummerWorks: August 8 to 18 at various venues on Queen West

Founded by five friends with an idea to form a fringe-style festival, SummerWorks Festival has been active on the Toronto scene since 1991. Summerworks is now the largest juried festival in all of Canada and it aims to present new Canadian plays, reflecting Toronto and Canadian culture. In addition to theatre, SummerWorks also hosts music and performance art pieces,.

Having began in 2009 the Guild Festival Theatre is one of Toronto’s newer festivals, but its content is rich with history. The Guild Festival Theatre presents pieces from the past, presenting an annual festival of classics on a Greek open air stage in the Guild gardens, above Lake Ontario. Its philosophy is that theatre “educates the soul, not only the intellect.” This year the Festival is presenting Moliere’s The Misanthrope.

Shakespeare in the Park: July 2 to September 1 at High Park Amphitheatre

This summer, Shakespeare in the Park is showcasing Macbeth and Taming of the Shrew. The performances are produced by Canadian Stage production in collaboration with the Department of Theatre in the Faculty of Fine Arts at York University. You can get your fix of both tragedy and comedy as the shows alternate nightly, and are both pay-what-you-can!