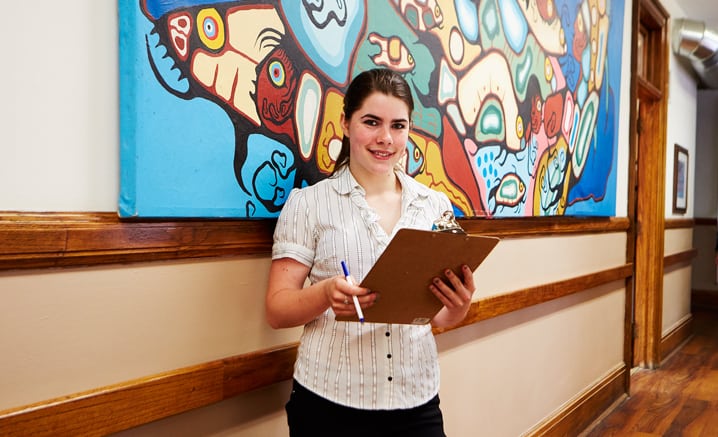 At She Does The City, we are dedicated to sharing women’s stories. To augment this mission, we reached out to our community of incredible women in order to expand the conversation, support each other and give back.

Earlier this month, we created the #BehindEveryWoman campaign for United Way as a means to acknowledge the extraordinary women who got us where we are, and to offer a hand-up to the women who could use our support. We believe that behind every great woman are the women who have her back. That’s why we’ve come together to raise $10,000 in 2018 for women living in poverty.

Sarah is one woman whose life has been positively changed by United Way support. This is her story.

When Sarah discovered she was pregnant at nineteen, it was bittersweet. She was excited to become a mom, but she was also terrified of raising her daughter in the same poverty and instability that had consumed her own childhood. “I witnessed a lot of my parents’ personal struggles as a child,” says Sarah. “I wanted to break that cycle and provide structure and security for my daughter.”

Sarah was living in a group home when she met the father of her child, who was abusive and controlling. She left the group home so they could live together, but they soon found themselves living on the streets. “I know what it’s like to actually have to rough it and figure out when (and how) you’re going to get your next meal,” says the single mom. “I knew I’d have to step up to the plate and become successful for my daughter to have a positive role model.”

But stepping up to the plate wasn’t going to be easy. Sarah knew she’d need lots of support, so she reached out to Native Child and Family Services of Toronto, a United Way agency. The agency helped Sarah and her daughter, who is Indigenous, find transitional housing—a chance to have a safe, secure roof over their heads. Still, she worried that she might not have anything in common with the other women at the house. But she quickly found a sense of community and participated in traditional Indigenous ceremonies and activities, such as holiday powwows, drum- and moccasin-making workshops and weekly drumming circles.

Having a new place to call home soon sparked Sarah’s desire to go back to school and build a future for herself and her daughter that she could never have imagined just a few years earlier. She enrolled in the agency’s ten-week education and employment course, which helps women obtain a college certificate in office administration while providing support in other ways, like transportation, meals and job-search training. Most importantly, the program provided on-site childcare so Sarah could go to class secure in the knowledge that her daughter was well cared for.

The program gave her the support she needed to get on her feet and find a sense of community. It also helped her land a job as an administrative assistant at the Native Canadian Centre of Toronto, a United Way–supported agency, where she helps fundraise and works with youth in the drop-in centre. “My job makes me feel independent and lets me stay actively involved in the community” she says. “I think my next step is to go to school so I can tell my daughter I went to university and encourage her to go as well. I’m not sure exactly where I’ll end up, but I know I’m meant to help people.”

We hope you’ll make a gift today to help local women and their families lead strong, secure futures. Make a donation to our #BehindEveryWoman campaign in the name of a woman who has made a positive difference in your life; whether it was a new boss who took a chance on you when you were a rookie, a friend who kept you going through that rough time, or the sister who has always had your back. Your donation will go towards helping a woman who really needs it. Donate here.