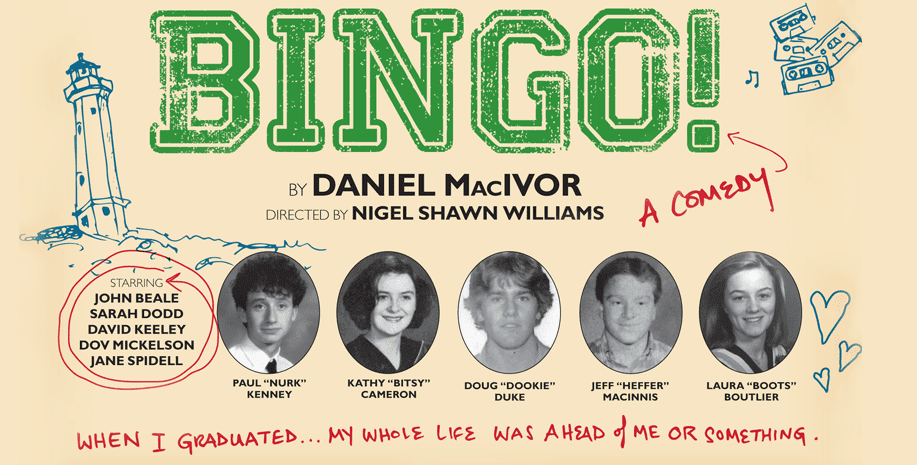 "This is a story about forced nostalgia—about five people brought together only by the fact that they attended school together in their past."

Factory Theatre’s BINGO! Is a Blast From Your Past

I’ve been out of high school for nearly 10 years. I left my hometown after graduating, and go back to see my parents and the handful of good friends I have there. Also, to eat treats at my favourite bakery (what up, With the Grain), buy dresses at the best shop (hello, Blush) and see live music (Hillside Festival. Know it). I haven’t been to a high school reunion yet, though it’s a small enough place that I run into people who knew me during what was an awkward phase. It’s fine — we exchange pleasantries and move along. It hasn’t been long enough that we’re feeling nostalgic (or at least I certainly don’t), but it’s fuzzy (I try to forget the terrible ‘personalizations’ I made to my uniform). Bingo!, an original play by Daniel McIvor (on now til June 1st at the Factory Theatre), is the story of five friends that come together 30 years after graduating from their rural Nova Scotia high school and how different they’ve become in those years that have passed.

This is a story about forced nostalgia—about five people brought together only by the fact that they attended school together in their past. They’ve grown up, become their own people, but they easily fall into the habits they shared with one another before. They call each other nicknames that nobody else ever uses for them now, and the power struggles that existed while they were teenagers rear the ugly heads once again. There’s a constant question: Why are these people associating with each other anymore? But it’s easy to understand. There were those of them who loved high school, who reveled in it. And those that may not have loved it, that don’t want to go back to it, are still a bit curious.

The set was gorgeous—easily flowing from boardwalk to hotel room to bar, scene changes and transitions were beautifully handled. Although the music wasn’t quite as good as The Big Chill’s soundtrack (a film to which some reviewers have compared this play), it threw back to the high school days of these characters, transporting and supporting them throughout the play.

It’s extremely satisfying to see Heffer (beautifully played by Dov Mickleson) finally stand up to the power-hungry Dookie (David Keeley). Although Dookie may be seen as the most successful of the group—what with the wife, the real estate business in Halifax, departing quickly from their small town—the reality is that he’s a bully. And that bullying may have gone over without challenge years ago, but these adults won’t put up with it now.

I felt like this play wasn’t geared towards me and as a result, it didn’t resonate with me as much as it seemed to with my co-audience. As the youngest person in the theatre, I felt a separation from the content that was being delivered. The acting was fantastic—you loved to resent the popular Dookie, felt like you could have a drink with Boots (Jane Spidell) and just wanted to hug Durk (John Beale). The audience around me seemed entirely satisfied, and rightfully so. But I couldn’t entirely connect with what was on stage. I couldn’t really get to know the gang as well as I wanted.

If you’re feeling nostalgic for earlier days, or want to be reminded what exactly it was that you’re not missing out on as a grown-up, check Bingo! out.