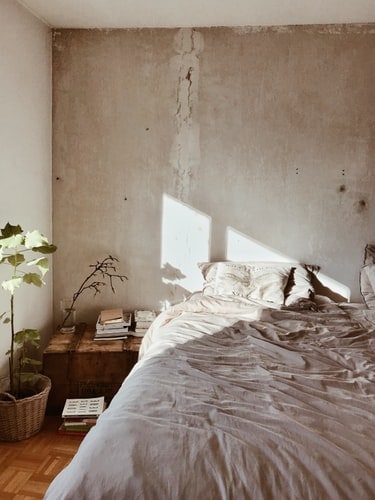 How I Learned To Have Good Sober Sex

One night, I discovered that sober sex can be quite amazing.

But first, there I was, asking that we take off our clothes and just get under the covers. I was never a shy person, but now, I was. Sober, I was. Sober with someone I really cared about, I was. I couldn’t imagine dealing with the ritual of sexy undressing, the clasps of bra getting caught in sweater, the so-not-hot pulling off too tight jeans and socks. We got naked without me looking. I don’t know if he looked, but if he did, he probably noticed I was trembling.

The bed was in a loft space, so there was that awkward part where I had to climb the ladder. I tried to swing my hips in the sexy pendulum of hip-swinging, except it probably looked as if I had a twitch. Actually, everything felt like a twitch; my whole body was one big twitch. Once under the covers, I realized I seemed to have gained a few new limbs—I had no idea what to do with my hands or legs…so many hands and legs—and when I spoke, my voice was not that come-hither kitten voice I could apply while drunk; it was raspy and cracking. My mouth was half-numb. But he knew my situation. He knew that this was my first time, and he was patient and focused and slow. I followed his tempo. Patient and focused and slow. Suddenly, I relaxed and my body responded in the way it has never before. I was no longer an insect. I was lovely and fluid. I got my good voice back—I said something nice and filthy—and I was completely absorbed by what was happening.

When I say first time, I mean first time having sober sex and loving it. I’ve had sober sex with new people before, but I was always so tense, I couldn’t seem to completely let go, and in the end I would often perform, just wanting to get it over with, hoping next time would be better. It usually would be better after a few trials, but overall I found it so stressful that I wanted to swear off sex altogether.

I don’t need to tell you too much about the bar culture and how people get together after drinks. Three drinks in, I’d be attracted to anyone with a penis and without a wedding ring. I’ve met all of my exes in a bar or at some boozy event. Drunk, I was confident, sexy, funny; I would dance and flirt and stay up all night. It wasn’t always pretty, but in a bar, in a bottle, things get forgotten, forgiven, unless you smash mirrors, which I never had. I got away with a lot, and the boyfriends were almost always great.

But sober, I no longer went to bars. I went on apps and met people “organically” (I work from home, so I don’t meet people at work). It was exhausting being sober and dating. I had no game, my jokes seemed forced, my flirting seemed forced, I seemed to have forced myself into high heels that used to carry me through rows of wine and vodka bottles. I dreaded some dates more than I dreaded doing my taxes. I would cancel. Or I would dress down so that it would be clear right away we were going to be just friends. Or I would try to have a relationship and try to replicate with sex what I remembered of it—artificially wild and uninhibited but not getting any pleasure.

Until that one time when I became just friends with a guy and he stuck around, happy to be “friend-zoned,” and eventually, slowly, I relaxed around him and then we climbed his loft and then all my awkwardness disappeared in seconds. From then on, I understood than in order to have good sober sex, I needed some foundation, not just stupid chemistry. I allowed my body to feel and respond to what was happening to it, not to what I wanted to project, which was still that drunk, wild girl. I was just in the moment with it, and it was mind-blowing. I don’t know if that guy was a particularly amazing lover, but I know I was amazing because I didn’t give any effs, my inhibitions disappeared naturally, I was aware of every sensation, and every sensation felt as it should feel—as if I was electric. I had nothing to prove. I had nowhere to hide. The next time I took my clothes off with him, it felt as natural as anything; it felt authentic and beautiful, which are two feelings I could never create artificially with the aid of alcohol.

Jowita Bydlowska was born in Warsaw, Poland, and moved to Canada as a teenager. She has published two books: a bestselling memoir, Drunk Mom (2013), and a critically acclaimed novel, GUY (2016). She’s had more than 20 short stories published in various magazines and journals. Most recently, her story “Funny Hat” was chosen for Best Canadian Short Stories 2017. As a journalist, she writes about culture, social issues, and mental health, and has been published in many national and international publications. She hates writing about herself in third person, but there you have it.