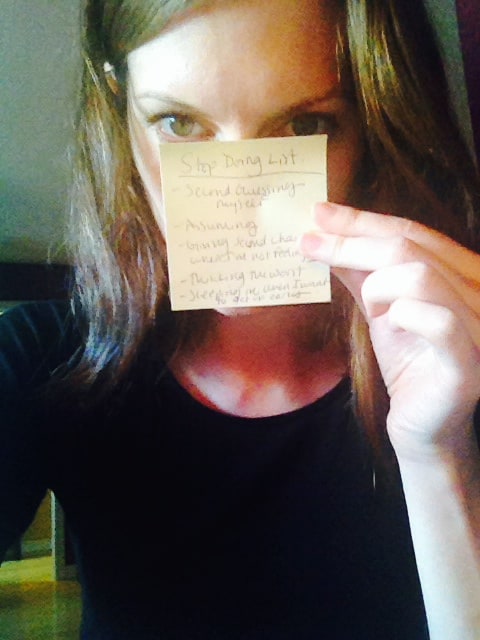 The other morning, I slept in later than I wanted to. Again. I immediately hated myself for it – again. I’m not much of a morning person, but I’ve realized that whenever I get up at a reasonable hour (say, like, 7ish), not only do I feel better about myself, my work, and basically life in general, BUT I actually do accomplish a lot during the day. On the flip side, when I sleep in later, I’m always playing catch up, never finishing things, and ultimately feeling like a failure.

So I sort of had another “aha” moment when I read Danielle LaPorte’s blog last week (you may remember her from my “Desire Map” post) on the Celebration of The Stop Doing List. It’s derived from an essay that Jim Collins (a businessman, author, inspirational dude) wrote in which he suggests in order for us to be successful and get what we want out of life, we have to stop doing the things that are making our goals unattainable, and our lives miserable. EUREKA! I realized I had to STOP sleeping in – and make it a priority to do so – in order for me to get shit done, feel good about myself, and make my life easy, breezy and beautiful. As Danielle wrote, “what you stop doing is just as important as the things you start doing.”

Looking back on the year, I thought about all the other things that made me feel heavy, crabby, resentful, and sucked the life and joy outta me. So here’s what else I’m going to STOP RIGHT NOW:

1. Second-Guessing Myself – Doing so only makes me feel less confident and assured. Also when I second-guess myself, I tend to seek validation from others, which only allows other peoples’ opinions and fears to override my own instincts. If I’m gonna make mistakes, they’re gonna be ALL MIIIIINE! On the flip side, if things work out, then I can revel in the joy that I did it my way and followed my gut.

2. Assuming – I’ve gotta side with my man, Miguel Ruiz, author of The Four Agreements, who recommends that everyone stop making assumptions because, well, assumptions are dumb. Usually (okay, like, 99 percent of the time) I believe what I’m assuming is the “truth” when it’s actually not. I’m just guessing. Or I’ll analyze a situation to death. Or I’ll think I’m on the same page as a guy because he said all the right things, but he didn’t DO the right things, and instead of really thinking, it turns out I’m assuming. Assumptions are rooted in fear. Assumptions get in the way of clear and effective communication. Assumptions are things I dream up in my imagination that usually turn into my worst nightmare. You see? Dumb.

3. Thinking the Worst – In a similar “second guessing myself” vein, I’m also going to stop all the Negative Nancy chatter in my head. When I pitch a new publication and I don’t hear back in like, an hour, I’m going to stop thinking, “They hate my pitch! I suck. I’m the worst writer EVER! I shall never work again!!” Instead, I’ll think, “Hey, it’s lunchtime. They’re probably eating a sandwich. Or busy with other important stuff, like work. They’ll get back to me. And if they say no, I’ll just try again. No biggie.” This will also go for my personal life. The Old Brie would be like, “He’s not texting me back because he’s OVER it! He met a new girl last night! He was using me the whole time!” New Brie is all like, “Oh, he didn’t text back? I didn’t even notice.”

4. Obsessively Checking/Answering My Email – If you’re on my Gchat, you know I’m on that thing 24/7. And if I’m not talking to you on there, don’t worry about it—I’m just obsessing over my email. Who’s emailed me? Who hasn’t? Ugh is this fucking junk mail again?! I’m OCD about my email, and it’s not serving me. It’s not only distracting me from writing, it’s distracting me from life. So, if I don’t get back to you ASAP, that’s a v. good thing.

5. Letting Unworthy Guys Into My Vagina – I know. Sometimes I won’t know their worthiness until they’ve already pitched a tent in there. The least I can do, however, is adopt a policy something like the following: “If I’m not sure what we are or what we’re doing and I think I might want to continue things past a one-night stand, then you will absolutely not enter my vagina until we are clear as to what we both want. Vagueness doesn’t turn my crank. Also, just because you’re a friend and/or you seem kind and funny does not mean you should get with this if I’m unsure. Oh, and absolutely no complainers are allowed to hit it either.”

6. Working on the Weekend (At least for one day) – As a freelance writer, it’s hard to differentiate between a workday and a weekend. Basically, I can have a four-day “weekend” in the middle of the week if I wanted to, or make a Sunday feel like a Monday (if I’m feeling especially masochistic). But I’ve realized that I like to be on the same schedule as my 9-5er friends (‘cause we can chillax more) and I also prefer designating one full day when I’m computer/Internet-free (‘cause I come back to “work” more refreshed).

7. Beating Myself Up if I Don’t Stop Everything On This List ASAP – Like everything else, this list is a process. A habit takes three weeks to break and/or form. It will take time to implement, and that’s okay. So, if an unworthy penis enters my vagina while I’m obsessively checking my email and assuming the worst, I’m gonna go easy on myself, and you should too.

My Size and Shape Are Not Up for Discussion

What I Learned From a Year of Intentional Living