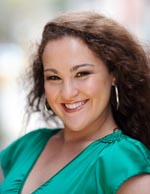 Jokebox Comedy Lounge brings an inclusive night of laughs to Comedy Bar on Mondays. Producer Deanna Palazzo tells us what it's all about

JokeBox Comedy Lounge takes over the Mainstage of The Comedy Bar (945 Bloor St. W.) every Monday, bringing the Toronto scene a truly inclusive night showcasing a great comedy cross-section of what the city has to offer. We sat down with the lady of many hats, Deanna Palazzo – actress, director, performer and also the producer of the JokeBox’s weekly events – to discuss the night’s role in the city’s comedy community.

JokeBox came into being about two years ago when Deanna and Impulsive Entertainment cohort Braden Dragomir decided that they wanted to inject something fresh onto the scene.  “We wanted to create a new space – to create a variety show, of sorts. Stand-up has created its own culture, and so have sketch, improv and musical comedy. I got into comedy about six years ago and had observed all the different entities on their own, so we thought ‘Wouldn’t it be cool to bring everyone together?’” And so JokeBox was born.

The evening maintains a quick pace and seamlessly flows between comical genres. A recent show was hosted by comic Mike Rita, and featured stand-up from Jess Beaulieu, Lottery Spot winner Brandon (or ‘Chubby Drake’, to use his self-given moniker) and sketch from Pink Slip and British Teeth. Rita held the night together with quips, witty observations and enthusiastic introductions for each act – there really is a sense of camaraderie in amongst all of this variety, something Deanna works hard to maintain.

“The night is constantly growing: as of November we’re going to begin incorporating comedic shorts and trailers to the beginning of our night to expand on variety element… My true belief is the more we all work together in this comedy community, the stronger it becomes, the better chance we have to become a New York or a Chicago where each place is supporting each other and we can grow from that.”

Something which struck me personally was the female-to-male ratio on stage on this particular bill: it was refreshingly equal. I wonder if this representational balance is something  Deanna consciously strives for or if it’s just something which occurs naturally when you have a wealth of talent to pick from each week. “This industry in particular is a really tough place to be in as a woman. We’ve obviously made leaps and bounds, but I want to show people that there’s some really fantastic female talent out there…I feel like we’re at the beginning of something special.”

“I’ve been producing this show for two years and I’m yet to make a penny. If I can’t be onstage at that time I want to be near it and helping it grow.
You literally have a blank slate – an empty room. I see the show build from putting together a line-up, then when you see the room fill up and people walk out of here smiling – I feel like I’ve done something important.”

Add a smile into your Monday nights. JokeBox @8pm, $5 at The Comedy Bar, 945 Bloor Street West.
(Top tip: the gelato spot across the road serves until late – giggles and gelato are a great start to any week.)