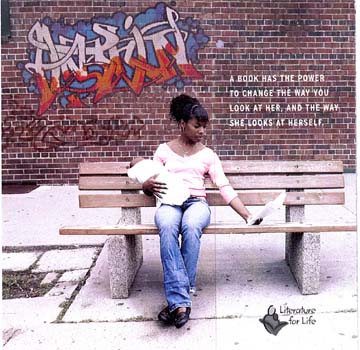 Literature for Life: Quite possibly the world's most important book club.

Literature can be a conduit for finding one’s voice; either in an author’s words or ones own. Thinking back, some of my most formative moments as a girl (and now, years later) were found in words on a page.

I chatted with Jo Altilia, Founding Executive Director of Literature for Life – a Toronto-based organization that assists marginalized young moms in finding their voice through literature. They host reading circles (like book clubs, but better) and even produce a magazine. It’s no secret that literature can be an empowering personal tool, but what is most interesting and exciting is its role in breaking the cycle of poverty.

You may have read about Jo here. Jo knows an awful lot about the impact of literature on women.

What role does literacy play in a woman’s autonomy?

Most participants in Literature for Life live in poverty and isolation, and a third have a history of physical and/or sexual abuse. Often they have less than a grade 10 education and generally lack critical literacy skills. Research suggests that their children are likely to continue this cycle; more apt to underperform in school, become teen parents themselves, or end up in trouble with the law — often becoming dependent on the welfare system. We have learned over the last ten years that assisting teen mothers in developing strong literacy skills increases their ability and confidence to invest in education opportunities for themselves and for their children. Literacy is a powerful tool and a first step in breaking the cycle of women and child poverty.

Statistics and studies identify young, single motherhood as a social issue or problem because they and their children are at greater risk for poverty, limited employment potential, and a host of other health, personal, educational, social and economic problems. The Status of Women Canada’s publication “Social Policy, Gender and Inequality” states, “Socio-economic disadvantage is even more pronounced among teen mothers. The consequences of precipitate pregnancy to the educational and economic futures of young mothers are well documented. As a group very young mothers are less likely to finish high school, attend college or do graduate studies than their classmates, even after controls for socio-economic background, academic ability and motivational factors have been considered.”

Young mothers also tend to be seriously disadvantaged with respect to employment, perhaps, in part, as a result of educational deficits. They are much less likely than women who did not become mothers before age 18 to find the stable employment that would allow them to support themselves and their children adequately. Not surprisingly, these young women are disproportionately poor and more likely to rely on public assistance for their economic support.

However, new research demonstrates that with early and meaningful intervention, young mothers can take steps to improve their own outcomes and identities, and build better lives for themselves and their children. There is clearly a need among this population for such intervention programs, and that need is addressed by Literature for Life’s Women with Words Reading Circles and Yo’Mama Magazine.

Don’t take our word for it….some thoughts from Literature for Life’s participants

Julie
“Imagine not knowing how much joy a simple page and pen could bring, or not realizing the intoxicating powers of a single book! That was me!!! Pregnant at 17, with very few ways to express myself yet still searching. I found myself sitting with a group of young women, my eyes to the floor and so scared of taking that first step. We were all there for support, encouragement and most of all to better ourselves. I remember the first poem I wrote with Jo. It was about being a woman – independent, successful and beautiful, using words to create a base for who I wanted to become. The weeks rolled on and friendships were formed. I evolved into a writing machine, I couldn’t stop filling up my pages with random thoughts and ideas – using rhyme as my weapon.
I’ve had so many amazing experiences and met so many fascinating people along the way. Conquering fears and pushing myself to leap in front of a crowd that actually wanted to hear MY poetry. Now I am a personal trainer with my own business. I write a health and fitness column for Yo’Mama and look forward to seeing more young women accept this challenge and learn the beauty of their words, and themselves.”

Jackie
“It was because of a book group I attended in 2004 that I started reading consistently. Before then, I never would have read a book – not even for a book report. I remember a couple of the first books I got were “Lovely Bones” and “Rush Home Road”. Each book was brand new and mine to keep, igniting some interest to read. Time went on and I started to attend Humewood House, a school for young mothers where I crossed paths again with Literature for Life’s reading circle. I now see that knowledge and insight can be just a book away, whether an encyclopaedia or novel. Reading opened up a whole new world for me and at times served as my escape.

I rank the importance of literacy so high on my scale that I spend a lot of time promoting it. I believe that the ability to read and write sharpens the mind and enables one to discover who they are, where they’re coming from and where they’re going. I am currently a student at Mothercraft College pursuing my ECE diploma.”

What books have been most influential for you, Jo? What are you reading now?

When I was a teenager, I was influenced by Dune (Frank Herbert), Siddhartha (Herman Hesse) and Wuthering Heights (Emily Bronte). These books opened up the world of reading to me and the ideas they presented through narrative engaged me on a creative and intellectual level.

More recently I have been most influenced by Blindness (Jose Saramago), Paradise (Toni Morrison), The Red Tent (Anita Diamant), the Book of Negros (Lawrence Hill), The Birth House (Ami McKay) and A Hundred Years of Solitudes (Gabriel Garcia Marquez).

I usually have two or three books on the go….I just finished reading Room (Emma Donoghue) and The Help (Kathryn Stockett) and am now on to Far to Go (Alison Pick).

Literature for Life is a registered charity – and an awesome one that needs some help. As we call know, regrettably books aren’t free so please consider making a donation (one time, or you can arrange for an easy monthly schedule) at www.literatureforlife.org.

Literature for Life $1 Book Sale at Yonge and Lawrence this Sunday!