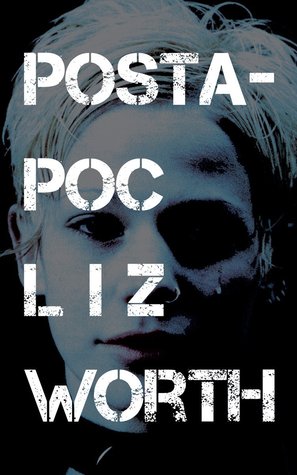 I’ve been following Liz Worth’s work since her first book, Treat Me Like Dirt, an oral history of the punk scene in Toronto in the late ’70s and early ’80s. I’m about the same age as Worth, so I also missed out on the music and scene the first time around. The New York and London scenes were well documented, but little seemed to have survived about what was happening closer to home. Worth’s book provided the first look at Toronto’s punk scene from the mouths of those who lived it, and it was glorious.

When Amphetamine Heart–her first poetry collection–came out, of course I bought it. Once again her work effused raw emotion with a punk energy that I found irresistible. PostApoc combines the best of these, the punk and the poetry, and the dirty grit of just trying to survive it all.

The book takes place after the world has ended, and revolves around Ang, the sole survivor of a suicide pact that claimed the lives of her boyfriend, his band, and their followers. She’s estranged from her family, couch hopping, and largely friendless. Her days are spent getting high, getting drunk, and scavenging for drugs, drink, or food.

Largely out of it, Ang offers no explanations as to what happened. The world is simply over, and Ang and the small circle of people she lets in are resigned to that fact. Food is hard to come by, water is scarce, the power is spotty, and roommates disappear into thin air. Feral dogs roam the streets; what few people remain are rarely seen.

Refuge is found in music, and the new hallucinogenic drug that has entered the scene. Greyline is rumoured to be “made from a shake of magic mushrooms and the ashes of the dead,” and is poured on the back of the tongue as reality dissolves. These drugged out scenes lend themselves to poetry as Ang seeks escape from her cruel environs.

Toronto is unnamed, but it’s evident from the streets and scenes described that this is where the story takes place. The farther but not-too-distant Montreal serves as a possible utopia in Ang’s bleak world. Rumours of a better place rise and fall, but the music and drugs root her in place, until she finally reaches a breaking point.

There’s an aspect of magical realism in the sigils, omens and cult-like atmosphere of the concerts, butt whether the world outside Ang’s sphere is really gone, or whether it’s all a guilt and drug-fueled hallucination is a puzzle, and a fascinating one.

PostApoc is published by Now or Never Publishing. Liz Worth is @LizWorthXO on Twitter.

Nico Mara-McKay is a freelance writer living in Toronto. Nico can be found online at nicomaramckay.com and on Twitter @plutopsyche.