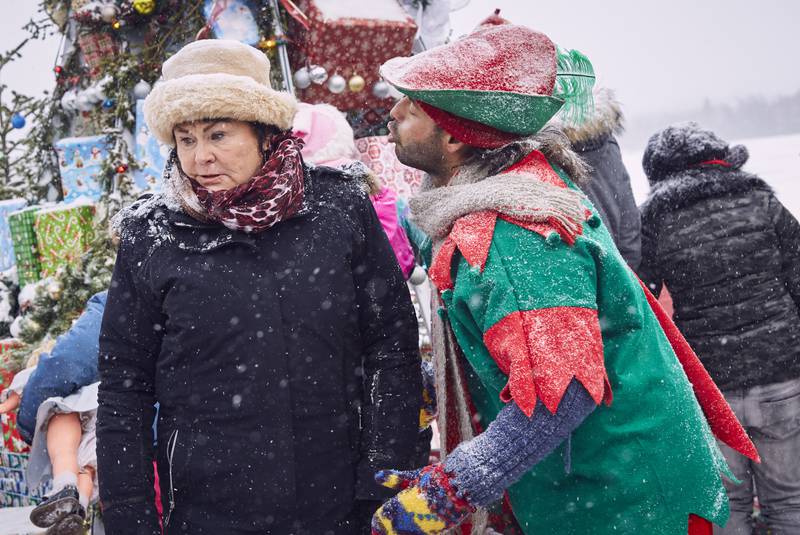 After racing from one end of the city to the other, I made it to the Soho Metropolitan Hotel a few minutes early for my interview with comedy legend, Mary Walsh. Co-creator of This Hour Has 22 Minutes and creator and star of Hatching, Matching and Dispatching (plus dozens of other films and television series), Mary is undoubtedly one of Canada’s most recognized comedy stars. Would she be as friendly and forthcoming as I assumed she’d be? I plunked myself down in the hallway outside her hotel room and eagerly awaited our first meeting, when the door swung open.

“Oh, you’re here and ready to go. Come on in then,” said Mary, warmly ushering me in, barefoot and cozily wrapped in a terry-cloth bathrobe. Both at ease, we agreed we were fine to proceed our taped interview with Mary half-dressed.

“How are you today?” I said, while Mary got comfy on the couch.

“I had a bad day yesterday. I was feeling lost. I think it’s because I woke up at 5am and went on Facebook. I think that’s really bad for you.”

I realized that unlike so many other interview experiences, where subjects are guarded or come with prepared answers carefully sculpted by a team of publicists, my conversation with Mary would be the real deal. In the span of twenty minutes, we touched on everything from the glitz and glamour of Yorkdale Mall, to bullshit fantasies of Christmas, and the lifelong journey of living with alcoholism.

As a fellow woman in recovery, I was keen to ask Mary about her philosophies and journey with addiction (she’s twenty-five years sober!), but the impetus to our meeting was to talk about her upcoming Christmas special, A Christmas Fury, which premieres December 3rd on CBC. So I started with that.

Written and starring Mary, as well Mark McKinney, Shaun Majumder and the rest of the beloved Hatching, Matching and Dispatching crew, this Christmas special shows the darker side of the holiday season. Picture the perfect Christmas snow globe, and then see what happens when you smash it on a rock (or THE rock, as it all takes place in Newfoundland).

Bizarre and vulgar, A Christmas Fury shows us every family’s worst Christmas nightmare. “All my comedy, all my life, has really been about family, and Christmas is the thing that puts the most strain on a family. If a family isn’t working at all, during Christmas is when it’s more obvious than ever.” Mary describes the Furey family – an alcoholic father, enabling mother, sibling rivalry – as “the worst people to have a Christmas special.”

We chuckle a little and then recount our own feelings and memories. “There’s this fantasy that everyone is in a warm room with a fire going and everything is glorious!” Mary says, getting visibly emotional about the season. “I remember trying to make Christmas perfect for my son: millions of lights on the tree! Thousands of presents! It was just so overwhelming for him. I remember sitting down – it was just the two of us at that point – and him sitting there opening presents and then looking up at me and saying, ‘Are you going to open some presents, Mom?’ The WEIGHT of my expectations on him for trying to make the best possible Christmas. I don’t think I’m the only one who feels this way.” Taking a moment to sigh and breathe, she continues, “Still after all these years, I feel somewhat brokenhearted about Christmas. Now I just go away.”

I explain that prior to arriving at her hotel, I had been at the One Of A Kind Show media preview and was hitting a Ferrero Rocher event next. Moving from one Chrsitmasy thing to another, I listened to a radio show about the mal-effect on people’s minds when Christmas carols begin to play too early in the season. It’s a confusing time of year.

“It’s just another day! It isn’t this fantasy world that you’ve built up. That heartbreak that it’s never going to be THAT CHRISTMAS – it’s like, FUCK OFF!”

We took a moment, and I offered Mary some Christmas bark that was in my knapsack.

Now that we were neck-deep into the mania that is Christmas, I asked her what her advice was for those seriously struggling, those early in sobriety. “Christmas Day was the worst for me. Over and over, people would tell me to go to the Christmas morning meetings. Of course, I never took their advice, and then finally I did and it made such an enormous difference. It was very touching, to be there with everyone, just trying to get through the season.” (Been there, done that: it is a very good idea.)

Although written as a comedy, A Christmas Fury has its own recovery story. Talking about her character, Mary Lou, the matriarch of the Furey family, Mary describes her need for control: “Her life is so out of control that she doesn’t know what else to do except control everyone else’s lives! Recovery is kind of like Christmas: having Christmas on Christmas’ terms versus whatever you want it to be is so much easier.”

Moving away from the script of the film, Mary shares her own hard-learned lessons of releasing control: “Being able to, over the years, learn to accept things for how they really are and realize that the world is so much more amazing than the dark hole I was digging for myself. Living life on life’s terms is so much easier than living life on my terms.”

While Christmas is a day that Mary has always found difficult, it’s provided her with a lot of comedic material to work with, and the process of shooting A Christmas Fury was perhaps where she found the most joy from this emotionally fraught holiday. Smiling, she tells me how, during the shooting of the special, she spent hour after hour playing outside in the snow – something she’s never really done as an adult. “It was giddy!”

Of course, reuniting with her old cast and crew was also special. “We hadn’t really been working together for ten years, and it was just like what they say about old friends: we picked up exactly where we had left off. It was an absolute miracle that we were able to get everyone back together!” Sometimes we crave so much that our Christmas will look like the perfect scene unfolding in a wondrous globe, but sometimes it’s also nice to smash that shit and make our own magic.