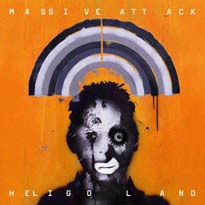 Olga Kwak (@piratecakes) won tickets on twitter from SDTC and Livenation to see Massive Attack at the Sound Academy on Sunday. She reported back from the show.

If someone asked me how I spent my Mother’s Day and I replied back, “Oh, I took in a trip hop concert,” chances are, I’d get a funny look. Indeed, I did get a funny look when I told my sister I was lighting out of town early to catch Massive Attack play at the Sound Academy last night.

Mama Kwak, on the other hand, was understanding—“Go, have fun. You’re only young once!”

I’m dreadful with setlists, so you’ll have to bare with me. Massive Attack’s production duo 3D and Daddy G were joined onstage by a full band, including a drum machine and a full drum kit. They launched right into new music from their recent release Heligoland. They did a fabulous job of interspersing old and new material throughout the night. Obviously the more popular songs—Teardrop, Angel, Karmacoma—were the biggest successes of the night, but I danced my way through the whole thing. They were joined onstage by several vocalists, including the opening act, UK songstress Martina Topley-Bird who sang Teardrop and roots reggae singer Horace Andy, who provided vocals on Angel. When the first bars of Future Proof began I was taken back instantly to the first time I had heard the song. It was magical.

The visuals were pretty intense as well—the band performed in front of a wall of scrolling text that would display quotes and political messages as the band played, most notably from the late Howard Zinn, a former Professor of Political Science and historian opposed to the war in Iraq. Nice to see that their political edge hasn’t been blunted in the passing years.

All in all? A great show. Thanks to She Does the City for the tickets!