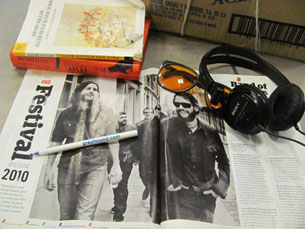 On The Road to the Sasquatch Music Festival: 100 million Greyhound Buses, Doing It Caveman-style, Love of the Luggageless

First, a few words about Greyhound. Choice words. We’ve always had a symbiotic co-existence, the ‘hound and I. I’ve logged many hours-nay, days-at a time crisscrossing the continent on their coach buses, and they’ve always been good to me. That’s why I (perhaps rashly. Possibly foolishly.) decided to circumnavigate North America on a solo bus journey from Toronto to the Sasquatch Music Festival outside Seattle. But apparently, something has changed. I don’t know what I did, but somewhere between grabbing a Blue Moon on a Nashville patio with my roommate and munching a $2 quesadilla in Amarillo, Texas, Greyhound decided to eat my backpack, and with it, several of my worldy possessions (that is to say, clothes). Standing in a severely embarrassing state at the customer service desk of the downtown LA bus station, mascara stains smearing the front of my glasses,  I think I managed to frighten every single person who worked there with my uncontrollable sleep-deprived sobbing, my pleas for assistance, and my three-day bus hair.

I got on the bus on a sweaty, bleary Thursday night in Toronto. It rambles down the states through to the south. When I hit the Oklahoma City bus terminal, I’ve been curled up on a grimey bus seat for two straight days. A beautiful 18 year old with dreadlocks asks my name, and tells me he would carry me, caveman style, all the way to California if it meant I would stay with him forever. When I get on the bus, an equally beautiful Compton native tells me he’s heading home for the summer because his best friend came to visit and he accidentally got her pregnant. He was in extremely good spirits about the whole thing. “She wanted me to move in with her and her boyfriend, but I was like naaaaw. I’m staying with my moms.”

In Amarillo, Texas, I stop for lunch and end up talking to Lee, a grizzly old photographer for the LA Times. He tells me stories of staking out bank robberies and sneaking onto O.J. Simpson’s property as the police pulled him off the premises-he ended up on his knees on the lawn, camera waving like a white flag in the air, but he got the shot. As the bus groans west towards LA, he tells me about how growing a beard might have helped him stand out less during the Rodney King riots, and about shooting forest fires in Montana, which I’m pretty sure is still entirely populated by mastodons.

Outside LA, our bus driver pulls over to the side of the road to cuss out a cocky Irish kid for stepping to close to the driver’s seat while the bus was moving. He almost leaves him on the side of the road, and his diatribe makes me seriously late for my bus to Santa Cruz. By the time we get to LA, I have a very bad feeling in the pit of my stomach. I get off the bus, and my back pack does not. Shit. After raving maniacally to some seriously disinterested bus employees, I sit on the floor of the station clutching a lost baggage form and trying to find the bright side. Luckily, having hair this gross really puts things in perspective. Con: My belongings might be trapped behind a honky-tonk in Nashville. Pro: I’m adjacent to a large body of water.

A windy, death-defying nighttime bus takes me up the 101 through tiny, sleepy seaside towns to Santa Cruz, California, where I plan to replenish my festy wardrobe via Target and some choice vintage depots. Here’s hoping I don’t have to dip into the beer fund. I roll into town at 6 in the morning, and that day I manage to cobble together some new ensembles. My friend and I stand on the edge of the continent staring at apocalyptically crashing waves and prehistoric-looking birds. We ramble down Westcliff to watch the surfers, then pile into her Volvo named Svetlana and drive up to Oakland, where after a brief stop into her parent’s kitchen for wisdom, girl stories, and talking about tasers, we drive up to Sacramento at 1 in the morning to put me on a bus. When we get to the station, the ticket lady, fierce nails tapping, patiently tries to explain (several times) that I can’t get on the bus, because it’s sold out. This concept is somehow beyond my overtired grasp. After sitting on the floor of the station for an hour, we give up, drive to a tiny town off the highway, check into a Red Roof Inn, and sit in an empty field drinking warm Pabst we found in the bottom of her car and staring at a giant orange moon. The next morning, we drive to Davis and eat delicious eggs benedict and rosemary potatoes on a sagging porch heavy with vines, and spend hours poking around a tiny bookstore. Then, my belly full of delicious, my bag full of replaced supplies, and my spirit seriously renewed, I get on a bus in Sacramento and roar Northward for the Canadian border.

Sealion wants to come surfing, too.

Read More of Haley’s West Coast Adventures: On The Road To The Sasquatch Music Festival: Hitchhiking, Sangria, Whistler, and the Defensive Properties of Rachael Ray Paring