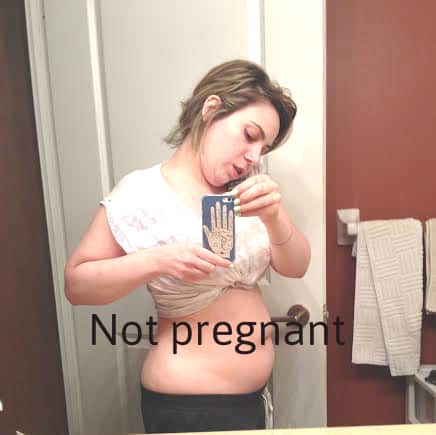 "After a year of various ruptures, hospital visits and waking up drenched in sweat in different spots in my apartment, I decided it was time to do something about it."

Ovarian Cysts, Birth Control and Me: It’s Going to be Okay

Who knew the uterus could cause so much pain amirite? The above picture is of me just two (maybe three – there were a lot of pain meds) weeks ago. No, I’m not pregnant. I had an ovarian cyst burst with complications.*

*Author’s note: The complication was that my uterus was likely to reabsorb the blood released by the rupturing cyst then filter it back into the cyst (like this is a thing) and then repeatedly release the same blood into my body… ovaries R assholes.

You may notice I’m on the phone. In my painful stupor, it was either a priest whom I contacted for an exorcism, or a doctor I was calling and pleading for my life, naturally the latter was the first call I made.

In the past year, this has happened a total of three times—the first landing me in the hospital for three days while intravenously and spiritually connected to morphine, with the most recent finding me passed out on my kitchen floor at 4am from pain. Ovarian cysts are apparently natural, just not at this frequency.

I’m told that a cyst of the ovary can be a few types – the type I had to endure, X3, was of the Luteum variety wherein the egg is released from the ovary as per usual, and waits for dat sperms. Sad and disappointed that no sperm arrives (thank heavens), the cyst randomly decides to fill up with blood. Most eventually goes away on their own. But not mine – no, no: the rupturing cyst feeding into itself actually causes overall abdominal swelling and pain (hence the preggo pic). The entire sheet of nerves that extends from my vaginal area to right under my breasts becomes electric: say goodbye to eating, sleeping and walking.

After a year of various ruptures, hospital visits and waking up drenched in sweat in different spots in my apartment, I decided it was time to do something about it. I booked an appointment with my GP. The response was one I had been dreading: birth control.

I am an avid fan of choice, rights and access to health care, but birth control has been something I’ve personally never wanted to use, mainly because of all the terrible horror stories you’ve heard about it from your friends: it makes you fat, you get wildly emotional, you lose your job because you’re just plain crazy, you stop being able to fall asleep, you get cancer, no one loves you and a bunch of other bad experiences. I had to ask myself what was worse: fearing the destructive nature of estrogen (eye rolling) or going through this pain again and again with no end in sight?

I bit the bullet: I started birth control.

The good news: it’s nowhere near as bad as I’d worried. I’m only having a little bit of difficulty sleeping, and some difficulty waking up. Also, I’m not overly emotional or irrational.

The bad news: I fell prey to the common idea that a woman’s emotional nature is too dangerous to be tampered with and the addition of more hormones to my ‘already delicate hormonal balance’ is deadly. Perhaps we are fed and feed each other the stories of women becoming ‘overly emotional’ (whatever that is) to serve the unfair adage that women are somehow less than men in our society. The idea that we already have an excess of feeling, to add to it would simply be too much, make us too female, out of control.