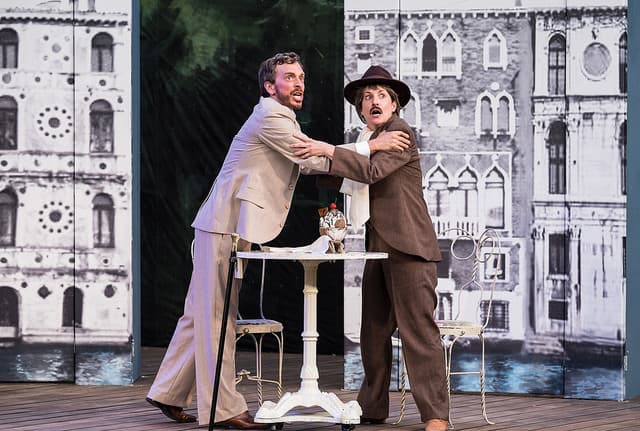 Q&A With The Ladies Of Shakespeare in High Park

Sound the trumpets, the 33rd annual Shakespeare in High Park kicks off this weekend with Julius Caesar and The Comedy of Errors. To find out more about the new productions, we sat down with actor Naomi Wright (she appears in both plays!) and Estelle Shook, director of Julius Caesar and recent grad of York’s MFA program.

SDTC: What’s been the most special/memorable aspect of being a part of Shakespeare in High Park?

Naomi: Shakespeare in High Park is a Toronto summer tradition and a Canadian theatre tradition, so to be part of it is a bucket-list check mark for sure. It is magical experience – an outdoor amphitheatre surrounded by trees in the middle of one of the cities most spectacular parks, performing some of the best plays ever written – it doesn’t get much better than that.

Estelle: I loved the excitement in the room when we staged the final scene – an addendum of sorts that completely modernizes the context and locates it squarely in our current Canadian political environment. I felt we all got excited by the opportunity to comment on current affairs, something the actual text only allows us to do obliquely, by inference.

SDTC: What do you find the most challenging about playing your character?

Naomi: In The Comedy of Errors I play one of the twin Dromios who is a man, and that has been a delight to figure out.  It was challenging at first to drop my idiosyncrasies that are “feminine” and find what it means to play a “man”.  I kept coming back to something that Virginia Woolf articulated about femininity and masculinity – that “one must be woman-manly or man-womanly”. I find it so powerful to strip away the idea of gender.  I think it’s a very current understanding and one that’s so freeing.

In Julius Caesar I play male characters but as women and the ideas I have been exploring in Comedy bleed over into that show too.  The most challenging aspect of Caesar for me is the sheer pace of the show, playing multiple characters.  The athletic demands of using the entire amphitheatre as our playing space and quick changing between characters are high. I will be fit by the end of summer for sure!

SDTC: What do you find the most exciting?

Naomi: I find everything about live performance exiting really!  It is electric and dynamic and so different every night!  Comedy is such a dance with the audience and a thrill to figure out every night.  The sound of laughter is one of my favourite things in life and that is probably the most exciting thing for me – it can be like a wave that you surf.

In Caesar, violence is always so present and the killing of Caesar is one of the most dynamic stage fights I’ve ever had the privilege to perform.  I find that thrilling.

SDTC: For those unfamiliar with the plot, how would you describe Julius Caesar in a sentence?

Estelle: The lead up to, and fall out from, an act of collective violence, perpetrated in the name of political ideology.

SDTC: Has the play been adapted for a modern audience?

Estelle: We have set this production in modern day Toronto, using the assembly of the High Park audiences as our People’s Assembly. We “enact” the story of Julius Caesar much in the same way Roman Catholics enact the story of Christ in the Good Friday procession – without meta self commentary. In this way we have sought to make it both modern and honour its powerful and unreplicatable historic nature.

SDTC: What’s your favourite way to spend a day off in the city?

Naomi: In keeping with life imitating art, I have just become the proud aunt to twin girls (in addition to a nephew whom I already adore) whilst playing a twin.  So right now, I spend all my days off with my family and that is really my favourite thing to do ever.  This city is so full of beautiful outdoor space and getting out there with friends and family to play bocce, or picnic, or walk the dog is how I like to spend spare time.  My Mum and Dad are also avid sailors and so getting out on the water is something I hope to do a lot this summer.  And Pan Am, and this city’s plethora of amazing restaurants, and and and . I love this city.

SDTC: What’s next for you?

Naomi: In the fall I am going to perform The Talking Heads by Alan Bennett at Campbell House with Precisely Peter Productions.  We are remounting three of his award winning monologues and adding three more.  He is one of the greats and John Shooter has done an exception job directing them – so come check us out!

Estelle: A workshop of a new Jordan Tannahill play, slated for production next spring at Canadian Stage. Then off to Europe for six weeks to assist renowned German director Peter Stein at the Vienna State Opera House.