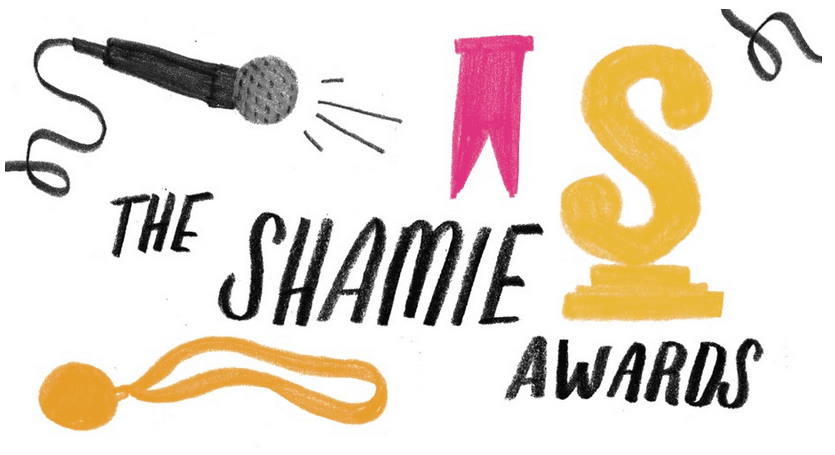 Hey Toronto! There’s a really great fundraiser coming up and if I were still living in and/or around ya’, there’s no doubt that I’d be attending the Shamie Awards on October 25th.

Not only are they being held at the Gladstone Hotel (just one of my favourite venues in the city, nbd) but it’s also a cause that I genuinely think is really, really, really important. Proceeds will be going to Shameless Magazine, a progressive publication targeted at teenage girls to inspire, inform, and advocate. I wish I’d known about it back when I was in high school instead of the bullshit I read instead.

We caught up with Shameless publisher Julia Horel last week.

SDTC: What is your role in the Shamie Awards, as well as the magazine itself?

JH: I’m the publisher of Shameless Magazine. In that role, I oversee all the business operations, which include events and outreach (as well as advertising, accounting, and liaising with the board of directors). In previous years, I have co-organized the Shamies with an event coordinator. There are now two event coordinators doing the heavy lifting for the Shamie Awards, which means I just need to provide advice and sign cheques!

What is Shameless hoping to accomplish from this event?

We’re hoping to accomplish a few things. Firstly, we want to raise awareness of Shameless. We hope to fill the room with folks who share our vision for a progressive, inclusive, anti-oppressive and forward-thinking media. Part of filling the room is to bring together friends new and old; we want to let new people know about who we are and what we do. Secondly, we want to have a fun evening and leave feeling great about what we do! Thirdly (although not unimportantly), we want to raise funds to support our work. We’re a 100% volunteer-run organization with no corporate sponsors and little funding. Nearly all our operational funding comes from subscriptions, advertising from a small group of progressive advertisers, and donations from people who believe in what we do.

Who will be speaking at the Shamie Awards? Give us a run-down of event highlights.

The awards portion of the event will be hosted by comedian Lauren Mitchell and our editorial and art director, Sheila Sampath. This will be Lauren’s first year hosting, and Sheila’s third. (Sheila has always been hilarious, but this year she took an improv comedy class, so we know she will be even MORE hilarious!) After we’ve roasted the worst of this year’s problematic media, we’ll celebrate the future by hearing readings from the winners of the second annual Talking Back Awards, a youth creative writing contest. This helps to ensure the evening has a positive note!

Why are the Shamie Awards important, in your opinion?

The Shamie Awards provide an opportunity for us to remember why it’s important that we exist, to carve out a space for ourselves in a media landscape that bombards us with oppressive and problematic messaging, and that silences the voices of many, many people who have important things to say.

Tell us a bit about the history of this event.

The first Shamie Awards coincided with our ten-year anniversary in 2014. An “anti-awards show” was an idea from a friend who had seen it done by an environmental group that called out some of the worst offenders in that field. We held the awards at a gala to celebrate our ten-year anniversary, and it was a great success! In 2015, we launched the Talking Back Awards creative writing contest and thought it would be a great opportunity to offer the winners a chance to read their work at a gala event. Now the Shamies and the Talking Back Awards are linked, and hearing youth read their work is an additional draw for attendees.

What can be expected to be different at this year’s Awards, as compared to last year’s?

We’ve had a different comedian host each year, so it’s always going to be a little different! The major difference this year is our new partnership with the Gladstone Hotel. We’ll be celebrating in a venue that will offer a real gala look and feel. We’re excited to reach out to a potential new audience through this partnership and bring new people to the event.

The awards themselves have also evolved each year, with new categories and new jokes. Last year, the event was held on the Friday before the federal election; there were a lot of ex-Prime Minister jokes that worked their way in. Who knows who will be the prime target of Lauren and Sheila’s razor-sharp wit this year?!

What does recognizing events like the Shamie Awards do to help teen girls and trans youth?

Bringing our community together once a year really helps to re-invigorate our drive to do this work and produce positive, informative media that uplifts teen girls and trans youth rather than bringing them down.

Why target the worst perpetrators of problematic media? What is the overall goal for calling these advertisers out?

Drawing attention to the often-toxic messages in mainstream media reminds us how challenging it can be for a young person to grow up with media where you may not be represented – or if you are, you are represented negatively (in a racist, sexist, homophobic or transphobic way, for instance).

Can you give us a hint at any of the ads/media that will be called out?

We have a bunch of categories that extend beyond advertising, such as “Most Disappointing Pseudo-Liberal,” “Most Egregious Use of People of Colour as Props in a Music Video,” “You’re Not My Feminist Spokesperson,” and categories for politicians, journalists and more! We are soliciting nominations now, but some of the nominees that have been floating around our social media include Amy Schumer, Donald Trump, Hope Solo, Meghan Trainor and Margaret Wente (I believe the category name “What WENTE Wrong?!” has been suggested). You can submit suggestions to us on Twitter or Facebook! (@ShamelessMag; “Shameless Magazine” on Facebook).

Where will the money raised be going?

All the money raised, after event costs, will go directly to the production of our magazine. We publish three times a year and also have a blog with original content (i.e., not found in the print magazine). Everyone involved in the magazine is a volunteer. We have no office and very low overhead costs (for instance, the archive of back issues is stored in my shed!) We like to be transparent about our operational costs. In addition to printing, mailing and a few office supplies, we pay a very modest honourarium to our contributors and to our editors and other volunteer staffers, but no one earns a salary. We also run a Youth Advisory Board consisting of eighteen teen girls and trans youth who meet every few months to advise us on editorial content, help us to run events and parties, and outreach to other youth. The board members are paid an hourly stipend for their time.

The Shamie Awards will be held on Tuesday October 25th from 7pm-10pm in a wheelchair accessible space with a gender-neutral washroom available. She Does The City is giving away TWO TICKETS for this event. Here’s how to enter!

Tweet the following: Hey @Shedoesthecity, I want to win tickets to @ShamelessMag’s #Shamies2016 on October 25th and call out problematic media! 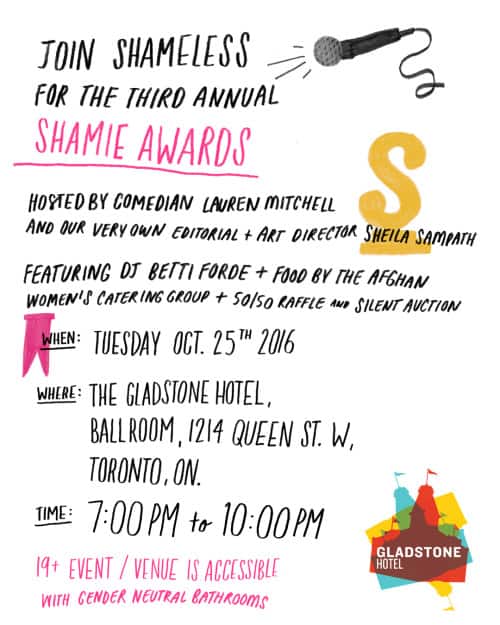