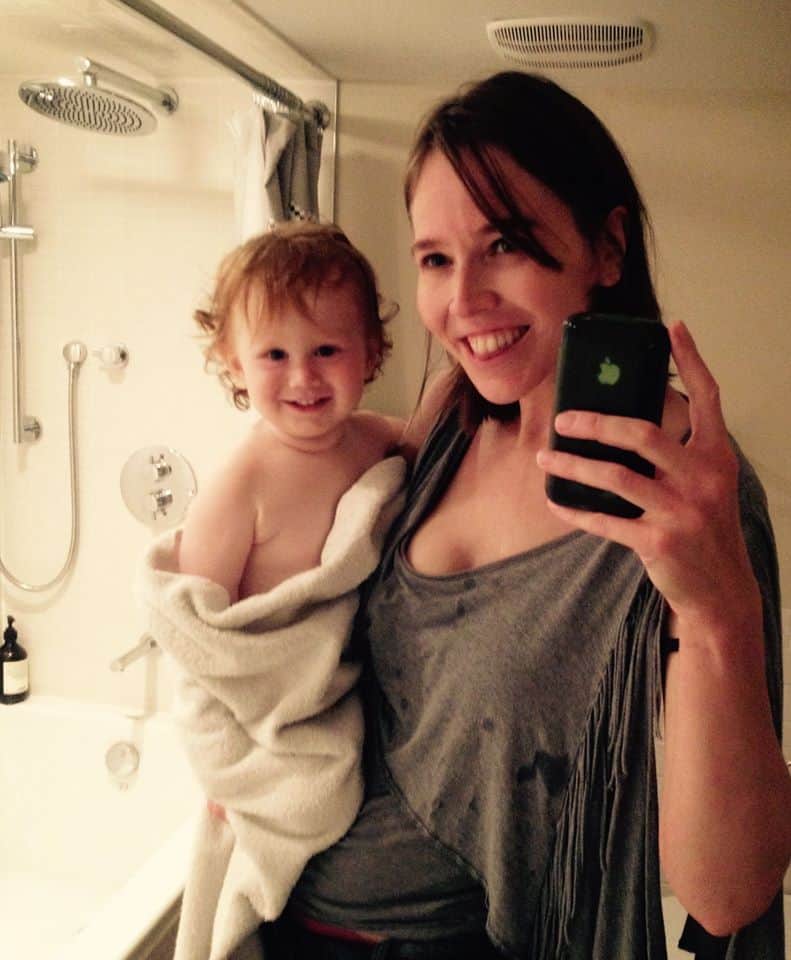 The Subtle Changes of Motherhood

If I were walking down the street without my son, you would see a woman wearing a black leather jacket, dribbling coffee, red lips and lipstick-stained teeth, likely texting with one hand. A mere glimpse, and I look as I did two years ago (maybe a little more tired), but you wouldn’t know I was a mother in passing.

However, if you’re behind me in line at the dollar store and I’m rifling for change, you may see crumbs of rice cracker spill from my hands onto the counter. A brightly coloured hippo the size of my palm may begin to vibrate inside my purse as I scour for a lost loonie. If you were to put your hand in my pocket (please don’t), you’ll probably touch a squishy and sticky thing. (I don’t know how a raisin ended up in there either, but there it is.)

Everyone knows about the major changes that happen when you have a baby: You don’t sleep, the idea of a date night becomes laughable, you never stop doing laundry, and you talk about poo-poo a LOT. But what I want to share are some of the more subtle changes that come with the arrival of a little one – the sticky treasures only a parent would notice.

You might assume that I’ve been sleep deprived, but you probably wouldn’t know that at night, our sleeping arrangement looks like the letter H, or A, or sometimes an upside down U. At around midnight each night, our son wakes up crying, and this is when I move him into our bed and we snuggle up like a letter in the alphabet for the remainder of the night. Babies don’t know that you sleep in a bed with your head at the top; they like to roll, squirm and find the most awkward way to sleep ever imaginable. When we’re in an upside-down U shape, I will sometimes wake up with a foot in my mouth.

The Five-Second (or more) Rule

Everyone knows that babies make a mess, but something I never anticipated is my new comfort level with eating things I find. Sometimes there is mushy oatmeal stuck to the fibers of my sweater, and I pick it off and eat it. If my son has been sucking on half a grape and decides after a minute that he’d rather chuck it onto the floor, I will often take the half-chewed grape and put it in my mouth.

If I saw a woman doing this, I’d be grossed out. When it is your child, however, it feels like they are an extension of yourself, your mouth. I mean, his mouth was in my tummy before it came out of me. So this makes sharing soggy Cheerios found in the carpet more acceptable. (Or is this just a me thing?)

I’ve always noticed people’s front porches, sort of. I mean, I used to look at them to spot interesting door paint or front stoop flower arrangements, but since becoming a mom, I now spend time every day carefully studying the intricacies of each door front on our street. Several times in a day, my son and I say hello to familiar cats and dogs, follow them, sing to them, but we also say hello to cement statues. Some of them make noises, like the lion next door, and some have songs that must be sung as soon as we see them. The plastic deer, for instance, requires a rendition of “Doe-a-deer” each and every time. When we see the pumpkin on your stoop, we point and say, “PUMPKIN!” again and again. It is a game that never tires.

I could complain about sleeping like the uncomfortable letter A, eating food off the floor, collecting rice cake dust in my purse and singing “Doe-a-deer” three times a day, but to me, these funny little changes that only I can see is the magic of parenthood.

The raisins just appear, and each time I find one, I secretly smile and wonder when the tiny hands hid away this small, wrinkled treasure.