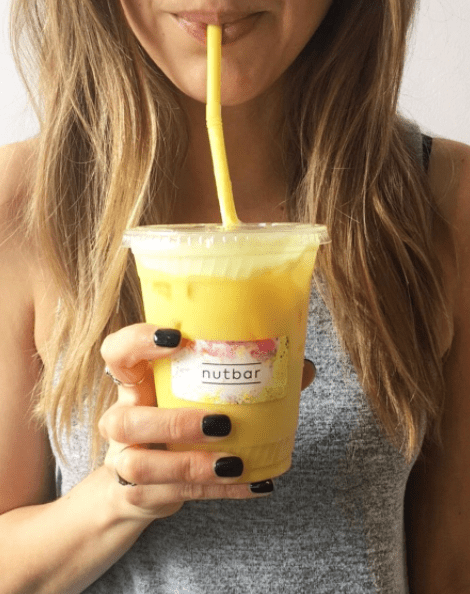 Latte purists, before you roll your eyes at the golden milk latte trend, know this is not just another coffee fad lurking in the glittery shadow of the unicorn-frap!

Fact: Turmeric has a long history of healing and has been consumed in hot-drink form in India for centuries. I learned this from Deepi Harish’s article, Turmeric Was India’s Cure-All Long Before Hipsters Made It a Latte. Turmeric “lattes” were something her mom, who grew up in the village of Punjab, called haldi doodh, which translates to turmeric milk.

Harish writes, “Turmeric is often prescribed by Ayurvedic practitioners to support the blood, liver, joints, immune system and digestive tract. In India, about 80 per cent of the rural population depends on traditional Ayurvedic medicine.” So, making drinks out of it was a simple way to reap the health benefits–and it’s not surprising that, after ghee, coconut oil and chai, turmeric would find its place in the Western wellness world.

Will your local indie coffee dealer (see a few of them below) be able to serve you a drink that heals what ails you? Maybe not like the haldi doodh in India, but consuming more turmeric, latte or not, could definitely help you feel more vital. According to Ayurveda, turmeric balances the three doshas; vata, pitta, and kapha (the energies that circulate throughout the body and govern our activity).

Holistic healing homeboy and Indian native Deepak Chopra refers to turmeric as a pharmacy unto itself. It is naturally anti-inflammatory and antioxidant, which supports our physical health in a host of ways. So let the golden milk trend grow and evolve. But if you want to start with the latte, peep this recipe from Toronto dealer Nutbar’s kitchen:

Combine all ingredients except milk, add a few tablespoons of hot water to mixture and stir to make a paste. Pour the mixture through a strainer into a cup, steam milk until frothy (optional), and pour over your turmeric mixture. Instagram it, if that’s your thing, and enjoy!

Or, just pick one up from one of these spots in the city: