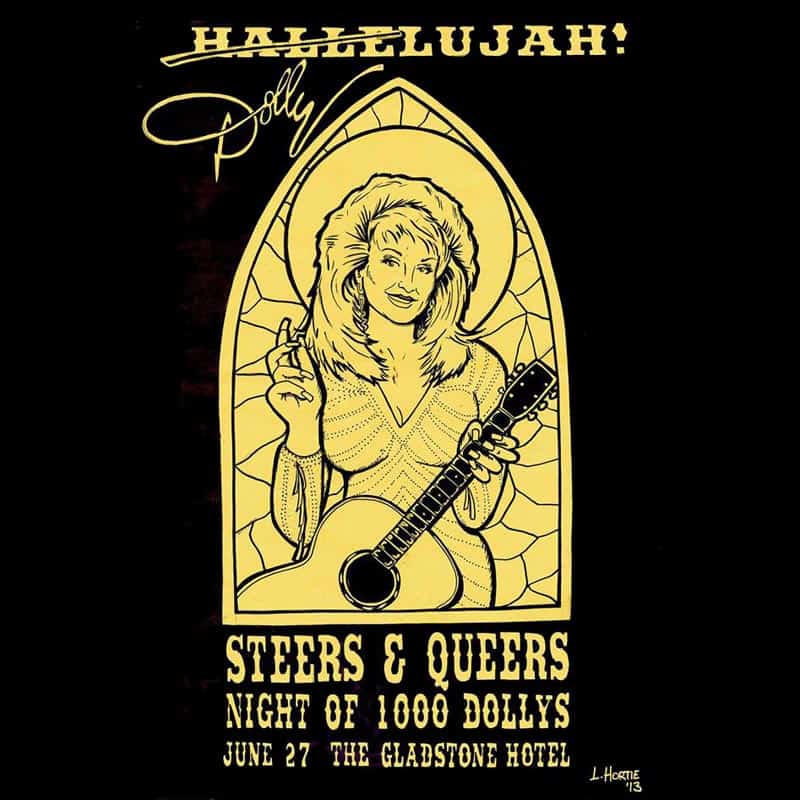 Your 2013 Toronto Pride Guide: All The Best Parties and Events

It’s that time again! Pride is taking over Toronto and we’ve rounded up our picks for the hottest parties and must-attend events happening across the city.

7 pm 3rd Annual 10×10 Photography Exhibition & Book Launch @ The Gladstone Hotel, 1214 Queen St. W. Kick off Pride artfully with the 2013 10×10 Photography Exhibition and Book Launch. Join this year’s group of ten Canadian queer photographers in celebrating one hundred LGBTQ Canadians who have contributed to the arts! All ten photographers and many of the subjects will be in attendance for the opening reception.

10 pm Steers & Queers: Night of 1,000 Dollys @ The Gladstone Hotel Ballroom, 1214 Queen St. W. Steers & Queers returns for another ram-packed night of Dolly Parton lovin’ fun. Rev Hightower will take you through a solid night of Dolly worship at the Church of Parton while you two-step the night away. With Lex Vaughn, Man Chyna, and The Pining + DJs Sigourney Beaver and Joe Blow. Dress code: Dolly drag, country and western realness. Yee haw! $10.

6 pm Trans March @ Norman Jewison Park, 15 Isabella St. Since it began in 2009, the Trans March has sought to provide a place for trans identified people to rally, to stand up and come together in solidarity. It’s a grass-roots community focused event, providing safe space for trans, intersex, gender-independent, and 2Spirit people.

7 pm The 5th Annual Clam Slam @ Ted Reeve Arena, 175 Main St. Start off your Pride weekend with hard-hitting roller derby action and hit up the fifth annual Clam Slam! Once again the Clam Diggers and Vagine Regime – teams made up of LGBTQ roller derby players from across North America – skate up and out for this unique Pride event. $12 advance tickets available online. $18 at the door.

10 pm Forever XXXI Prom: Pride Edition @ The Henhouse, 1532 Dundas St. W. Relive your 90’s prom the way you always wanted to – the gay way! Special guest host Matante Julie (of Montreal’s Glam Gam Productions) will have some special surprises in store as she joins Toronto’s sweetheart Lady Catnip to chaperone the evening. DJ Like The Wolf (Montreal) keeps the nostalgic hits coming and you sweating on the dance floor… until she decides to slow it down every now and then so you can finally ask that cutie across the room to dance with you. Prizes for Drag Prom King and Queen. Prom wear highly encouraged.

11 pm Pride 2013: Electric Punanny @ The Drake Underground, 1150 Queen St. W. “Over four years ago, an enterprising Jasmine Solano and MeLo-X, had the idea of pooling together their respective loves of reggae, hip-hop, and electronic music to form what would be titled Electric Punanny. Within the sweaty walls of NYC’s Swaynightclub, Electric Punanny would grow to become one of the city’s most popular monthly parties.” For Toronto Pride, the NYC crew brings local hero Michael Imperial along for the ride. 4 AM LAST CALL. $10.

12 pm Get Out! Pride Games Day @ Mattamy Athletic Centre, 50 Carlton St. The first annual celebration of equality in sports and athletics! LGBT athletes, allies, and admirers are invited to come together for a day of fun and play at Mattamy Athletic Centre in Toronto’s historic Maple Leaf Gardens. This FREE event aims to reduce the borders of accessibility by offering an entirely free and accessible day of sports, games and play. Dress up as a superhero for this year’s Pride Toronto theme for a chance to win exciting prizes including a one night hotel stay courtesy of Holiday Inn Toronto Downtown Centre. Schedule (subject to change): 12-1 pm, women’s shinny hockey; 1-2 pm, men’s shinny; 2:30-5 pm, community skate at the Ice Rink. 12-1 pm, jock yoga; 1-5 pm, drop-in sports (programming TBA) at the Coca-Cola Court.

2 pm Dyke March @ Church & Hayden. A grassroots event where women and trans people take over the streets of Toronto! A political demonstration of critical mass; a moment seized to revel in the strength, diversity and passion of LGBTTIQQ2SA women and trans folk.

10 pm The 2nd Annual CrushTO Pride Party @ Club 120, 120 Church St. Let your true rainbow shine! CrushTO is a flirty event series for hot, nerdy people who want to make sex-positive like-minded friends. An invitation for any and all: hetero, homo, queer, trans, kinky, lesbian, gay, vanilla, bi, flexible, poly, and open minded young people (or young at heart.) The event is for everyone, regardless of gender, race, relationship status or sexual preferences. Featuring a zillion colourful and sexy surprises + private consent-monitored booths to get extra-extra proud in! Dress code is rainbow madness. 4 AM LAST CALL. $10.

10 pm Box Cutter: A Queer Unofficial Pride Dance Thing @ Sex Laser, 1369 Dundas St. W. When Pride gets a little too tired, and the village gets too packed. DJs Jess and Lana play all queer dance jams all night to make you a little bit wet and feel a little bit seduced, whether you like it or not.

12 pm The Love & Lust Project Photo Kissing Booth @ Wellesly between Yonge. For friends, family, flings, lovers, and everyone in between! The Love & Lust Project was conceived by Ella Cooper (multidisciplinary artist, photographer & filmmaker) in collaboration with Sean Howard (photographer and passion researcher) as a fun and cheeky way to celebrate all the forms of love and lust that can be found throughout the LGBTTIQQ2SA community. Come by the photo kissing booth with someone you love (or lust after) whether it’s a friend, lover, stranger, mother, partner, son, grandfather or anyone in between. Portraits are free and will be uploaded to Flickr throughout the day then later included on the official photokissingbooth site later this summer and then exhibited throughout the following year leading up to World Pride! Runs until 8 pm.

1 pm TreeHouse Party @ Ryerson Quad, 350 Victoria St. The single largest day party during Toronto Pride! TreeHouse serves up a roster of talent that will send reverberations through the city. Featuring the sounds of international superstar DJs: Chus + Ceballos (Madrid), Abel (Miami), and Isaac Escalante (Mexico City) + locals Nick Bertossi (Vancouver) and Jeremy Khamkeo + Chez (Toronto). This party is absolutely FREE, with 100% of the proceeds from the bar and sponsorship benefiting The 519 Community Centre.

3 pm Alterna-Queer @ Alexander Parkette (outside Buddies in Bad Times Theatre), 12 Alexander St. The best in alternative programming, with everything from rock ‘n’ roll to opera, and burlesque, belly dancing, and drag. Performances by The Tryst, Matt Silver, Like Pacific, Goodnight Sunrise, The Anti-Queens, and Crackpuppy. Judy Virago and IGBY Lizzard Trash Cabaret takes over in the evening for a full one hour line up of…the unexpected…featuring ManChyna, Nancy Bobcock, Bellydancers with Pride, Aviva The Mirage, Helene Ducharme, and Jenna Syde. The evening closes with the Gothic sounds of Amy’s Arms, punk-hop grooves of Urvah Khan, and the gypsy beats of Jumple.