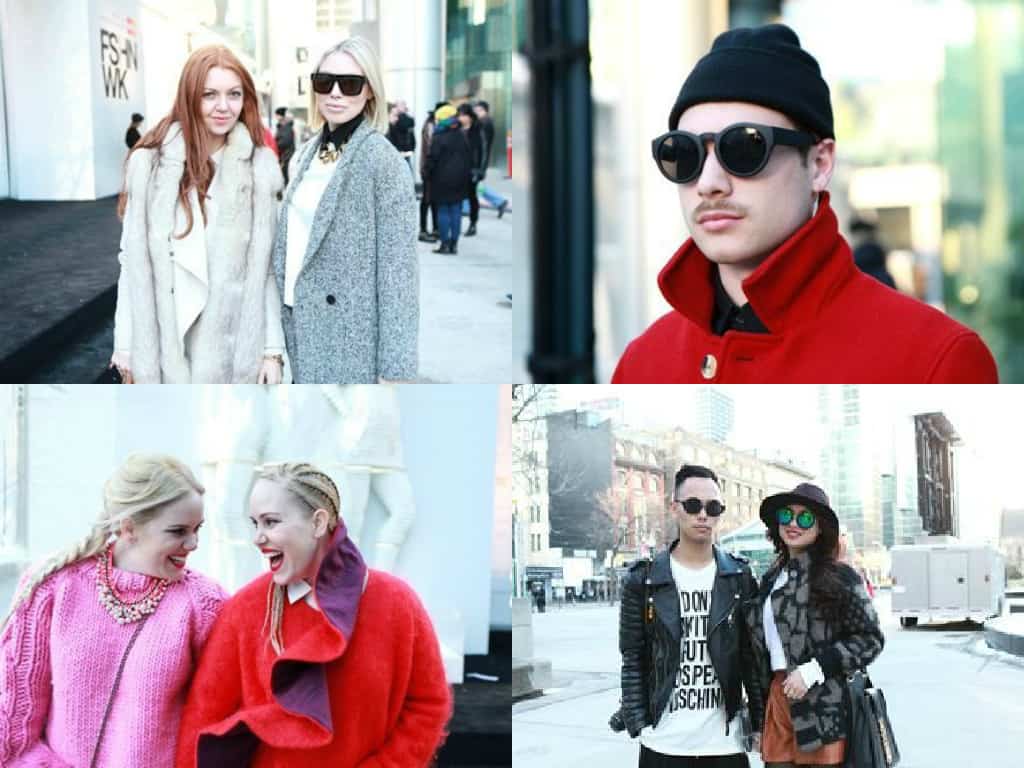 Every March, in the buzz of early patio season, the grey concrete of David Pecault Square comes alive with floral skirts and oversized sunglasses as World MasterCard® Fashion Week crashes Toronto. Like a pop-up shop of exotic birds; a collection of the weird, rich and sexy assemble together to celebrate the upcoming fall and winter fashions from Canada’s top crop of designers. For those new to this unfamiliar wild kingdom, here’s a rundown of the top 10 sleepless, insane, manic and passionate characters you’ll run into.

Fashion Week Internet “Celebrities” (+1000 followers)
Everyone has one internet famous friend that loves to gush about Fashion Week on social media. They tweet weeks in advance, Facebook 3x daily and Instagram blurry photos of runway models and cocktails late into the night. It’s overkill, but I guess they’re having fun? If you want to spot them in a crowd, they’re the ones with arms permanently extended, for optimum selfie shots. They dress to get noticed, and usually have pink highlights in their hair. Each social media update contains 30 hashtags that nobody understands.

The Socialites
They sit in the front row, proudly wear Canadian labels, switch outfits often and look positively polished. What you spend on rent, they spend on blow outs, manicures, oxygen facials and botox injections. They give the media a boldfaced name to play with, and act as a muse to the designers. Most importantly, they have money to blow and help keep Canadian designers on the racks at Holts.

Fashion Designers With Killer Hair
They wear clothing backwards. Sunglasses inside. Fur you never knew existed. They are the exotic creatures behind the runway, scurrying around frantically, stitching trims and perfecting outfits. They’ll probably dig the collections of Atelier Wonder, and Hayley Elsaesser.

Bloggers With Party Insomnia
Have you ever watched the “Ocean Deep” episode on Planet Earth? This my friends is your introduction to fashion bloggers. They are everywhere, big and small, loud and quiet. Many of these buzzing big eyed maniacs are managing multiple jobs, side gigs and extracurricular social activities. Some are well-known, others up-and-coming – the rest are networking for the purpose of survival (and free stuff). What are they doing? You name it. They’re styling. Writing. Reporting. Style stalking. Trend setting. Eating free stuff. Predicting things. Drinking wine. Taking pictures. They are the eyes and ears of street-level gossip. They don’t sleep, look flawless, and above all – they’re kind of crazy (in a good way). A few notable female fashion bloggers to watch out for: Anita Clarke (I want – I got), Sharon Ng Hayes & Tara Ng (Backseat Stylers), Kendall Donaldson and the world famous Beckerman Twins.

Photographers With A Flash That Could Blind An Innocent Baby Child
Risk losing your eyesight if you get caught in the flash. Photographers are located in the center of the action, snapping, clicking and clacking enough gear for a solo mission into space. They snap photos on behalf of blogs, newspapers, magazines and more. Please don’t stalk them, it looks desperate. Remember to watch an episode of America’s Next Top Model (Season 1) and own the Tyra Banks smize before posing for a party picture.

Random Drunk Girl Who Lost Her Phone
This is by far the most important person at this year’s World MasterCard® Fashion Week event. She is at every single party, in every single washroom and she’s usually sobbing (by herself). You see her. Avoid eye contact. She’s struggling. Now she’s screaming. Whatever you do. DO NOT MAKE EYE CONTACT. I’m telling you right now, she left her phone in the cab on her way here and she’s never going to see it again.

The PR Person Who Forgot To Eat Lunch
They are the hunters and gatherers of fashion week coverage. They can be found running, sprinting, casually speed walking backstage, through lineups, behind the scenes and across the dancefloor. Their purpose is to hunt editors, make small talk with anyone and everyone and gleam at the half-filled party they’ve been planning for the past 2 months. Like birds chirping mating sounds in the wild, PR people will abruptly shout out first names to catch the attention of their prey. Don’t be offended if they walk away from you mid-sentence. It’s their job to be ruthless.