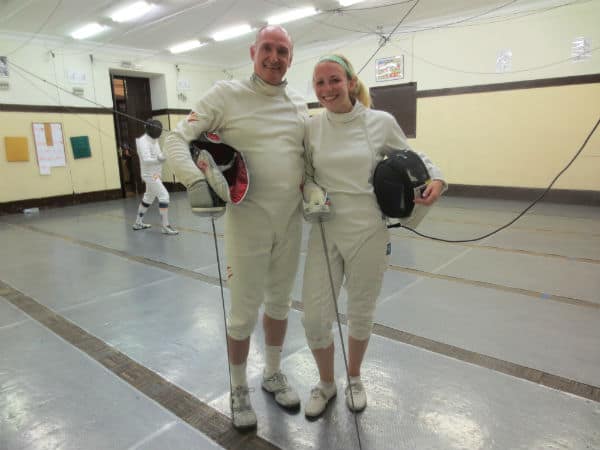 "I realize I'm talking more here about life than I am about fencing."

Her name was Sarah.

She was a small, skinny redhead with wire frame glasses who looked as meek as those kids who get picked last in gym class (which, who knows, may have been her motivation to start fencing).  She was my first opponent and she kicked my ass.  After about the fourth time that happened she took off her mask and said to me, “You need… be less afraid.”

Story of my freakin’ life.

Fencing, much like every other skill I’ve attempted so far on this trip, is full of delightful little metaphors for life.  In my first class, my teacher Andrea explained to me that much of fencing is about keeping the ideal distance between yourself and someone else so you can keep from getting hit (you shouldn’t really get hurt in fencing since you’re supposed to be covered in all sorts of padding and the tips of the epees are blunt, but that still didn’t stop me from looking like a battered peach for a few weeks).

But perhaps I’ll wait a little before I get to the super reflective part of our show.

I spent three weeks in Madrid learning epee fencing at the Club de Esgrima Cardenal Cisneros de Madrid.  Was it what I was expecting?  I don’t really know since I had no idea what to expect, but it was a damn good time and super interesting.  I spent my days practicing the same footwork over and over and a variety of attack and defense techniques that all have different names that I don’t remember.  The basic idea to keep in mind is to extend yourself starting with the arm and then the leg.  Simple, no?  And, of course, the sort of thing I was constantly ignoring when moving by instinct, but it makes perfect sense — don’t get closer to the other person than you need to (another one of those life lessons I need help with).  Think of the epee as an extension of your arm and touch your opponent with the tip while positioning your arm to prevent them from getting you back.

Or, as one of the older men I ended up sparring with said to me, “imagine that at the other end of the epee is a handsome boy and you want to reach him as quickly as you can, stretch your arm and extend the epee to get to him.”

So basically, in a nutshell, all about space, distance, and being brave. 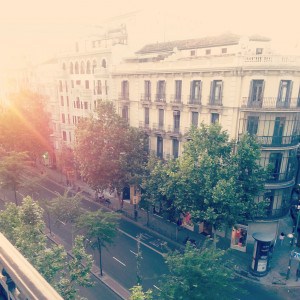 What’s the ideal distance between two people?  Between places, memories, or feelings? You want to be close enough to reach out, but too close and you’ll take a hit.  And of course inevitably, eventually, you will take a hit, and it may throw you off.  You may even get bruised and have that reminder stick around for weeks, but you’ve got to keep going unless you want to lose and go down without a fight.

And being brave.  Well what’s that all about?  When Sarah and I were sparring the first few times Milagrosa, the club coordinator, teased me about not moving or doing anything.  I was like, give me a break!  It was my first time fighting and actually making independent decisions about what to do with the actual sword in my hand!  Every other class Andrea had just told me what to do and we would repeat the move over and over so I could practice.  Mila wasn’t having it. “Try to remember what you learned,” she said, “but even if you don’t remember exactly, just do something!”

Again, sage life advice.  I don’t remember who said it, but I remember hearing a quotation with the general life advice of, “when you don’t know what to do next, do anything.”  I realize I’m talking more here about life than I am about fencing. (But at this point, aren’t they one and the same?)  If there’s one thing I’ve come to really despise in life, it’s passivity.  I am as guilty of it as the next guy, but perhaps that’s why I hate it so much, because when I’ve got nothing going on and I’m not doing anything I start feeling depressed and morose and caught in a rut.  And the only thing worse than all that is doing nothing about it, staying how you are.  No attempts to change the situation results in, surprise surprise, no change.  You’re stuck in a shitty situation of your own making because you haven’t done anything.

You can’t be passive in life.  Things happen, yes.  And sometimes they are wonderfully spontaneous, fun and feel like they were destined to happen and you, you lucky bastard, didn’t even have to lift a finger to attain this windfall!  Sometimes things just fall into place without you doing anything.  We call that luck.  But most of the time, good luck follows those who make it themselves.  No risks, no rewards.  It’s always going to be scary, but you have to try.  As our good friend Bruce Cockburn once said, “nothing worth having comes without some kind of fight.”

So basically, go ahead and attack life.  It’s going to kill you anyway.