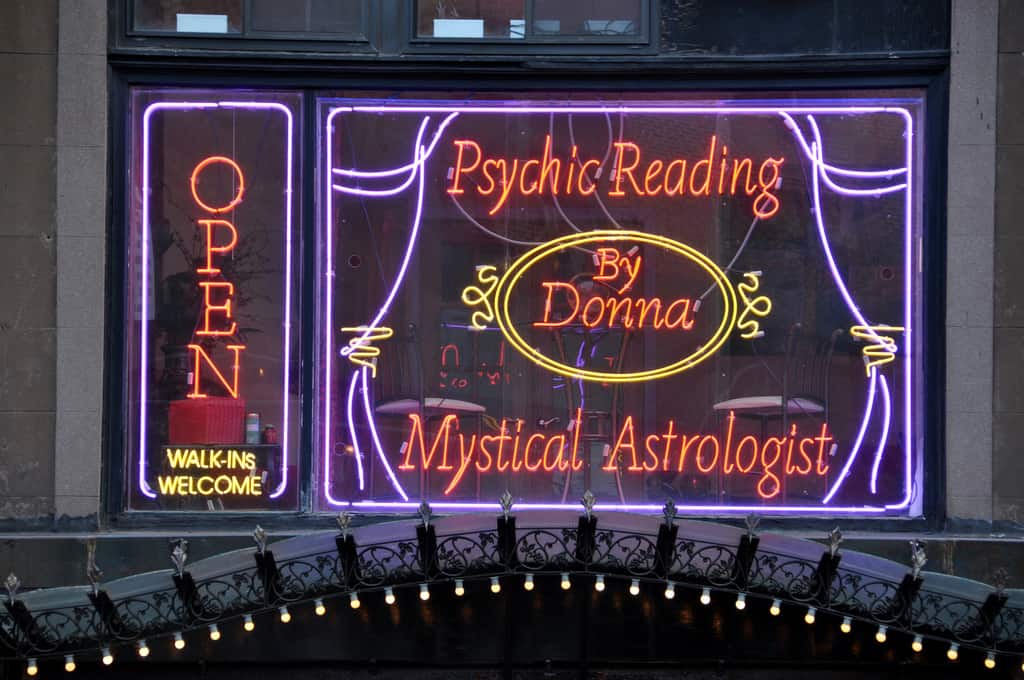 My family has always been preoccupied with the future.

Astrology was big in our household. Horoscopes were read daily. And psychic readings were a common weekend outing. We did not like living in the unknown. Mystery has never been our forte.

We wanted to verify that our careers were on the right path, that our significant others wouldn’t morph into assholes, and that the hat purchases we made the week prior were for the best. We wanted reassurance. We wanted comfort. We wanted professional counselling. Upon reflection, psychics might not have been the ideal solution for these needs. Our time would have been better spent with therapists, financial advisors, and our significant others, who were surprised to find out they were assholes after we broke-up with them.

And although I grew up chatting with dozens of psychics, I have always questioned their authenticity, their accuracy, and their potential to con me. You could say I’m a bit of a skeptic. I have gone to my fair share of sketchy fortune tellers, mediums, crystal ball owners, painters posing as clairvoyants, and my mother, who believes she possesses the almighty “gift”. She has often tried to predict how many children I’m going to have, to which I typically reply; “If it’s more than zero, spin again”.

I have had way too many erroneous palm readings done by women named Irene, Barb, and Delores to be a believer. I’ve been told that I’m destined to be a nurse, and a midwife, and a regular wife. When I explained that I was a single writer/comedian, Barb tried to connect that profession to midwifery, while Delores elaborately compared my telling of jokes to the healing of patients, and Irene explained that laughter is, in fact, the best husband.

So, why then? Why would I give my money to 90-year-old Irish psychic named James who tells me that my upcoming year looks “bleak and filled with paranoia”? Why do I continue this practice of having strangers attempt to piece together my life based on my outfit and my expression? Because I genuinely enjoy it. I enjoy something I don’t believe in. I admit it. I like psychics and my fascination with them comes down to this.

They force me to reflect upon stuff
My therapist has the same affect on me. After the session I look at my life in critical detail. I examine the decisions I’ve made and the people I’ve befriended and the donuts I’ve eaten and the sex I’ve engaged in and the complicated relationships I have with parental figures. It’s rare that I will sit and ruminate about everything ever and how it’s all added up to the present moment and how it will unfold in the coming years. Being compelled into intense contemplation is good and something I seldom do on my own.

They talk to me about me for a long while
I also seldom talk about myself at length. I fear that the individual listening will become bored of my stories and my voice and my essence. Who wants to be the self-involved, braggy friend who goes on and on about the human they’re banging or the job they’re hating or the rash they’re hiding? Nobody wants to be that guy. But that feeling of guilt is removed when you’re conversing with a psychic who was literally paid to observe you and inquire further. We should all indulge ourselves once in a while and hire an individual to pay attention to us.

They help me make decisions
Not in the sense that anything they say might be true. I am incredulous of every word that comes out of a psychic’s mouth (including “Hello”). They assist in finding a verdict by offering up their prophecy. The legitimacy of the prophecy is moot. But my reaction to the prophecy is all-knowing. It’s like the old coin flip trick. If you can’t choose one of two options, you make one heads, one tails, and then before the flip you naturally find you have a preference for one over the other. Decision made. If they foresee something I don’t like/do like, I know what’s up.

They make me realize what’s actually important
Psychics want to thrash out the relevant aspects of life. Work. Family. Friendship. Romance. Health. And that’s about it. They get down to the nitty gritty and zone in on what’s crucial, with a major focus on relationships. It always puts things into perspective for me. That pair of sunglasses I broke? Who cares. That meal I wasted fifteen bucks on? Irrelevant. That dude I made out with who said I didn’t use enough tongue for his liking? OVER IT. If it is truly a concern of mine, it’ll come up, one way or another.

They occasionally hit on something legit and it gives me chills
Although, I have been given the run around by many a soothsayer, I have also had talks with a few ladies who have (by some miracle) stumbled upon a piece of information about me that is so damn on point that I regret every eye roll I have ever made in my mother’s direction. How did they know that I had two dogs as a kid? How did they know I was recently laid off? How did they know that my body is made of 60% cheese? HOW DID THEY KNOW THE INSIDES OF MY SOUL? I don’t know how, but I gotta admit, it’s fun times when it happens.

They tell me some cool shit
Stars, do what? Crystals, are HUH? Planets go, bah? Tell me more, wise person of the psychic realm. My brain finds your knowledge highly calming and seriously entertaining.

They’re always a good story
In the end, even if they’re completely off base about 98% of the reading, at least I have a stellar tale to tell my pals. A psychic once said to me that I need to become one with nature and hang out with more gorillas, because they’re silly and I should be silly like them. The lols I got from that reading were worth every penny.

Do you feel like you’ve lost direction? This 12-week course will help you find your way back.

What Is Anxiety and How Can I Cope With It?

How To Stop Overachieving From Ruining Your Life