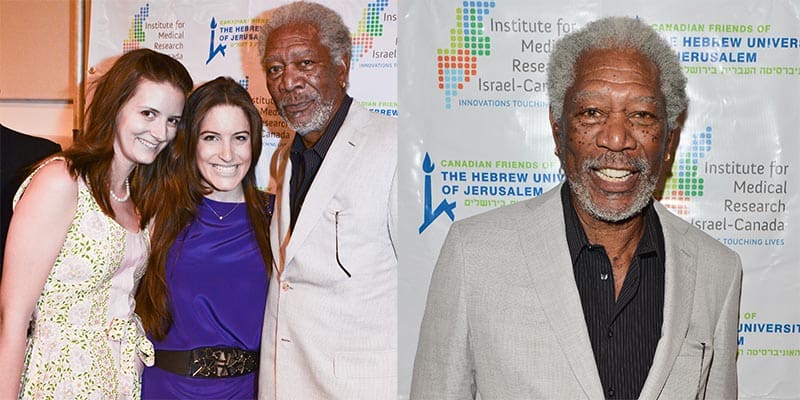 Last week I attended A Celebration of Excellence, a gala hosted by The Canadian Friends of the Hebrew University of Jerusalem, where Morgan Freeman was honoured with the Jake Eberts Key of Knowledge Award. It recognized his work in combating issues of racial discrimination and promoting education around the world. The event raised $2 million for the Institute for Medical Research Israel-Canada (IMRIC), Canada’s leading institution in Israel. Scientists at the institute are working towards enhancing medical treatments and finding ways to eliminate diseases including diabetes, Alzheimer’s, and cancer.

When Freeman arrived, I asked one of his security personnel if I could take a photo with the actor. Before I knew it, I had Freeman’s arm around my shoulder. I truly have no idea what words were exchanged between the two of us; he could have told me the weather forecast and I would have been mesmerized.

Hosted by Jian Ghomeshi in one of the Toronto Centre fore the Arts grand halls, the evening featured a musical performance by singer/song-writer Liz Rodrigues.

The cornerstone of the evening, however, was the intimate Q&A between Morgan Freeman and two-time Emmy Award-winning film and television director/producer Paul Saltzman.

The Q&A began with questions about Freeman’s favorite roles, to which he responded in his cool boom of a voice: “I loved Shawshank Redemption.  I just read the script and was ready to play anything. [But when I found out I was playing] Red…I said, ‘What?!’ The rest is what you would call history.” The movie he is most proud of? 1989’s Glory.

When asked why education is so important, Freeman discussed how he went to school is a segregated society. Freeman’s commitment to education for youth stems for his own childhood in the American south, where he grew up in a community in which many youths did not receive an education at all.

“It’s all about the teachers, the parents,” he said. “If you think something needs doing…get off your duff and start doing! I was quoting Shakespeare in grade eight. [I realized] boy, I’m smart and got an education here!”

I left feeling more nourished for thought and more driven to continue my work as a volunteer in my community. After all: No matter our culture, religion, race, or beliefs, we can use our abilities to make a positive impact on our communities—and on the world community as a whole.